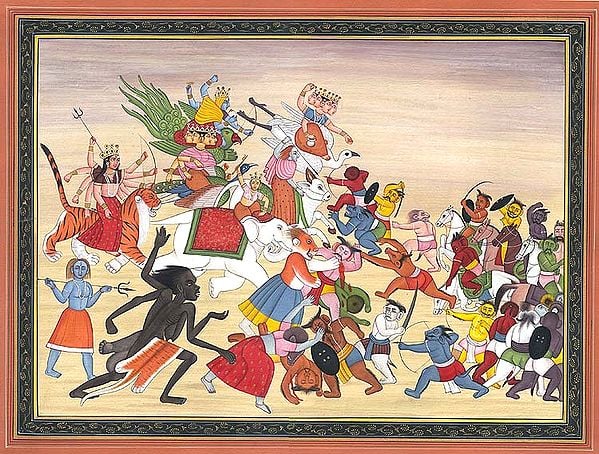 FREE Delivery
$292.50  $390   (25% off)
This item can be backordered
Time required to recreate this artwork
16 to 20 weeks
Advance to be paid now
$78 (20%)
Balance to be paid once product is ready
$312
Notify me when this item is available
This excellent miniature, rendered using Kangra idiom of Pahari art of around the last decade of the eighteenth century when it was on its peak, represents Durga fighting against demons. She is assisted by a number of subordinate female powers  'Shaktis', or the endowed energies of gods, widely known as 'Matrikas' Mothers, and 'Mahavidyas' aspects of all knowing Great Intellect. 'Matrikas' are conceived as consorts of various male gods. 'Mahavidyas' are, by and large, 'Tantrika' innovations of female energy. The number of 'Mahavidyas' is ten but that of 'Matrikas' varies between seven to eight or even more. Seven 'Matrikas', better known as 'Saptamatrikas', are : Brahma's consort Brahmani; Shiva's, Maheshvari, Raudri or Rudrani; Vishnu's, Vaishnavi; in Varah incarnation, Varahi; and, in Narsimha incarnation, Narsimhi. The consort of Karttikeya is Kumari; of Indra, Indrani; and, of Yama, Chamunda or Chamundi. As the mythical tradition has it, Saptamatrikas were created to assist Devi. Ten Mahavidyas are Kali, Tara, Chinnamasta, Bhuvaneshwari, Bagala, Dhumavati, Kamala, Matangi, Sodasi and Bhairavi. Though the concept of 'Matrikas' and 'Mahavidyas' is a late cult, Kali-like some Mahavidyas have quite an early origin.

'Matrikas' and 'Mahavidyas' are aspects of female energy, which become manifest in an act of eliminating the forces of evil. For giving a broader vision of them, the artist has conceived here a theme which includes both, 'Matrikas' and 'Mahavidyas', as jointly battling against demons. The theme includes the blue complexioned orange skirt-wearing Bhairavi and the black complexioned Kali from Mahavidyas; and Rudrani, Vaishnavi, Brahmani, Varahi, Narsimhi, Kumari and Indrani from 'Saptamatrikas'. On the lower right corner is Bhairavi; towards her left, Kali; on her left, the boar-faced Varahi; above Varahi, the lion-faced Narsimhi; above Bhairavi, the lion-riding Durga; on Durga's left, the white elephant-riding Indrani; above Indrani, the bull-riding Maheshvari or Rudrani; above Maheshvari, the swan-riding Brahmani; in between Durga and Indrani, the peacock-riding Kumari; and, above her, the Garuda-riding Vaishnavi. The number of these female powers being nine, they are sometimes considered as 'Nava-Durgas', a term which means both, the nine Durgas and also new Durgas.

There prevail various myths in regard to the origin of many of these female powers. 'Saptamatrikas' are said to have been created by gods out of their feminine aspects. Sometimes Durga is said to have created them out of her to assist her in her battle against the demons of Raktabija clan. Though Kali is said to have been created by Durga by separating her ferocious aspect and is part of the late 'Mahavidyas'-cult, she seems to have as early a tradition as has Devi. Kumari is said to have been created by Karttikeya from his left half. Sometimes her origin is linked with Shiva. A goat-faced princess Kumari was redeemed of her deformity by Shiva and consecrated as a divine entity in consideration of her rigorous penance which she performed at Stambha-tirtha. He gave her the name Kumari. During the Navaratras, Kumari is only the second to be worshipped after Devi herself.

The painting is unique in its depiction of motion and balancing the canvas, which has, despite that so many figures crowd it, a lot of breathing space, not only for the viewing eye but also for each figure enabling it to discover its distinction and identity. It draws its figures against a slightly shaded opaque backgroung, which has no form of its own to impose nor any kind of transparency to mitigate effects of lines and colour. The artist has used a wide range of colours in discovering body-complexions of various figures, and by doing so he has compensated the absence of nature, as depiction of nature would have presented a similar palette. A well-balanced canvas is as outstanding in its colour contrast. The green bird Garuda has a blue-complexioned rider wearing deep red and yellow costume. Durga's red skirt provides dazzling contrast to lion's deep orange. This orange appears as much eye-catching against Bhairavi's blue and Kali's black. The force with which each figure is charging is the most outstanding feature of the painting. In iconography, anatomical accuracy, figural proportion, placing and grouping of figures, and depiction of emotions the painting is simply unparalleled.

Symbolism of the Mahavidyas