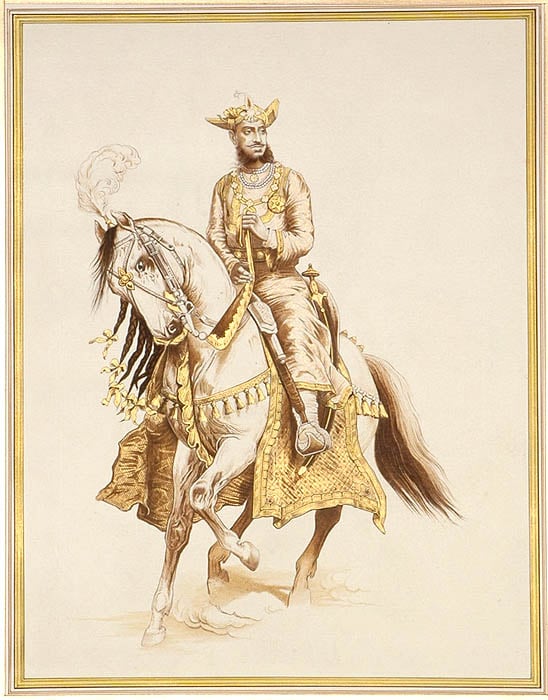 FREE Delivery
Only 1 available
$176
$275
(20% + 20% off)
Kailash Raj never fails to impress the spectators with his lovely brush strokes. In this painting, he illustrates a handsome Mughal prince, with upturned eyes that are complimented with soft arched eyebrows. The geezer is painted with a crooked nose and a thin imperial moustache which tops his full lips, as his protruding ears contrast his long brown hair that is entangled in curls. A soft golden opera drops down his chest beside a golden star badge that is emblazoned on his dress, along with a pearl choker necklace that adorns his neck. His head is decorated with a lovely hat that is embellished to show a flowery motif and a jaunty plume. The dashing man is adorned in a beige silk jama that drapes over his knees, revealing his cream white churidar pajamas that are followed by the beautifully designed light golden khussa.

The stunning prince is seated on a snow white horse that is tinted in brown, turning out to be a total ornamental piece. The horse's mane is twisted in numerous braids that are tied in golden ribbons, falling over its shoulders. It's poll is beautified with a creamy and cloudy voluminous feather that stands upright over the surface with an alluring golden embroidered extensive saddle cloth and a ball like threads that hangs from its shoulders to its flank.

The fabulous painting depicts the prince beguiled in love, returning back to meet his lover, it is a perfect example of a long distance yet thriving relation that is encapsulated in this amazing artistry, making it a must buy on your shopping cart.