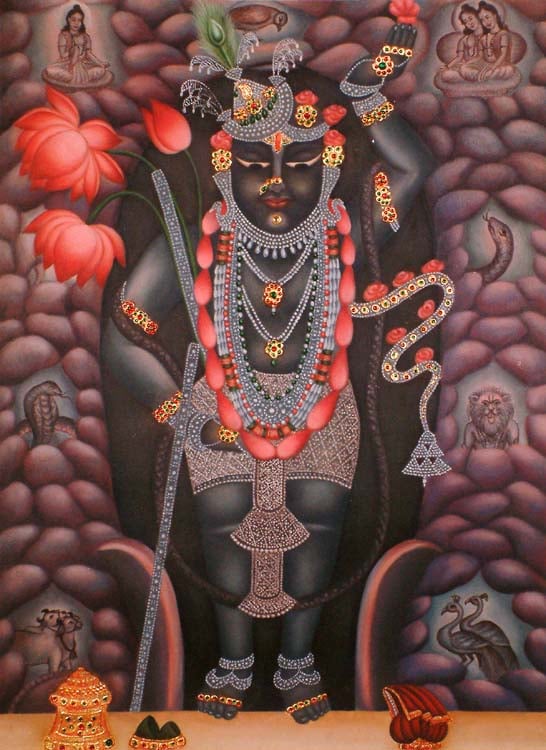 Fair trade
Depicting Krishna in his numerous forms is a painters delight - an adorable toddler, stealing butter in his childhood, romancing Radha and other gopis in his youth, sermonising Arjun in the battle-filed of Kurukshetra - every transition of his life has been portrayed.

This canvas depicts him as Govardhan Giridhari, Srinathji which represents the form of Krishna in which he lifted the Govardhan hill and subdued Indra, the king of Devas who was causing an incessant downpour of rain causing immense hardships to the cowherds of Gokul. Here Srinathji is shown in regal splendour in exquisitely worked jewels in golden paint and actual green and red beads, lending uniqueness to a two dimensional surface. Lotus flowers and buds brighten the canvas with their form and colour. Surrounding Srinathji's image are the gods and humans, the birds and the beasts, all wanting to witness Krishna perform the miracle. The image of Srinathji is represented black on charcoal grey but the artist has used subdued hues for the surrounding representations also excepting the lotus flowers. This description by Renu Rana.