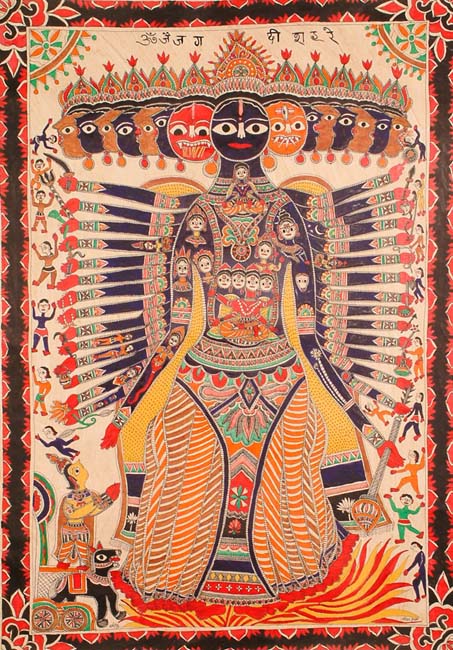 Vishvarupa, The Cosmic Man as Envisaged in the Bhagavad Gita

$155
Quantity
Notify me when this item is available

Fair trade
At the left hand bottom can be seen the supplicant figure of Arjuna, one of many heroes in the Mahabharata. He says: "O Lord, if you think me able to behold it, then, O master of yogis, reveal to me your Immutable Self." The Lord said: "Behold my forms by the hundreds and the thousands - manifold and divine, various in shape and hue. Behold all the gods and angels behold many wonders that no one has ever seen before. Behold here today the whole universe, the moving and the unmoving, and whatever else you may desire to see, all concentrated in my body. - But with these eyes of yours you cannot see me. I give you a divine eye; behold, now, my sovereign yoga-power."

Having spoken thus, the great Lord of yoga revealed to Arjuna his supreme form as Vishnu, Lord of the Universe: with many faces and eyes, presenting many wondrous sights, bedecked with many celestial ornaments, armed with many divine uplifted weapons; wearing celestial garlands and vestments, anointed with divine perfumes, all wonderful, resplendent, boundless, and with faces on all sides. If the radiance of thousand suns were to burst forth at once in the sky, that would be like the splendor of the Mighty One. There in the person of the God of gods, Arjuna be-held the universe, with its manifold divisions, all gathered together in one. Then, overcome with wonder, his hair standing on end, Arjuna bowed his head to the Lord, jointed his palms in salutation, and addressed Him:

"In The body, O Lord, I behold all the gods and all the diverse hosts of beings-the Lord Brahms, seated on the lotus, all the patriarchs and the celestial serpents. I behold Thee with myriads of arms and bellies, with myriads of faces and eyes; I behold Thee, infinite in form, on every side, but I see not Thy end nor Thy middle nor Thy beginning. O Lord of the Universe, O Universal Form! On all sides glowing like a mass of radiance I behold Thee, with Thy diadem, mace, and discus, blazing everywhere like burning fire and the burning sun, passing all measure and difficult to behold. Thou art the Supreme Support of the Universe; Thou art the undying Guardian of the Eternal Law; Thou art, in my belief, the Primal Being."

This vision was opened to Arjuna on a battlefield, the moment just before the blast of the first trumpet calling to combat. With the god as his charioteer, the great prince had driven out into the field between the two battle-ready peoples. His own armies had been assembled against those of a usurping cousin, but now in the enemy ranks he beheld a multitude of men whom he knew and loved. His spirit failed him. "Alas," he said to the divine charioteer, "we are resolved to commit a great sin, in that we are ready to slay our kinsmen to satisfy our greed for the pleasure of a kingdom! Far better would it be for me if the sons of Dhritarashtra, weapons in hand, should slay me in battle, unarmed and unresisting. I will not fight." But thereupon the comely god had summoned him to courage, pouring out to him the wisdom of the Lord, and in the end had opened to him this vision. The prince beholds, dumbfounded, not only his friend transformed into the living personification of the Support of the Universe, but the heroes of the two armies rushing on a wind into the deity's innumerable, terrible mouths. He exclaims in horror:

"When I look upon Thy blazing form reaching to the skies and shining with many colors, when I see Thee with Thy mouth opened wide and Thy great eyes glowing bright, my inmost soul trembles in fear, and I find neither courage nor peace, O Vishnu! When I behold Thy mouths, striking terror with their tusks, like Time's all-consuming fire, I am disoriented and find no peace. Be gracious, O Lord of the Gods, O Abode of the Universe! All these sons of Dhritarashtra, together with the hosts of monarchs, and Bhishma, Drona, and Karna, and the warrior chiefs of our side as well, enter precipitately thy tusked and terrible mouths, frightful to behold. Some are seen caught between Thy teeth, their heads crushed to powder. As the torrents of many rivers rush toward the ocean, so do the heroes of the mortal world rush into Thy fiercely flaming mouths. As mouths rush swiftly into a blazing fire to perish there, even so do these creatures swiftly rush into Thy mouths to their own destruction. Thou lickest Thy lips, devouring all the worlds on every side with Thy flaming mouths. Thy fiery rays fill the whole universe with their radiance and scorch it, O Vishnu! Tell me who Thou art, that wearest this frightful form. Salutations to Thee, O God Supreme! Have mercy. I desire to know Thee, who art the Primal One; for I do not understand Thy purpose."

The Lord said: "I am mighty, world-destroying Time, now engaged here in slaying these men. Even without you, all these warriors standing arrayed in the opposing armies shall not live. Therefore stand up and win glory; conquer your enemies and enjoy an opulent kingdom. By Me and none other have they already been slain; be an instrument only, O Arjuna. Kill Drona and Bhishma and Jayadratha and Karna, and the other great warriors as well, who have already been killed by Me. Be not distressed by fear. Fight, and you shall conquer your foes in the battle."

Having heard these words of Krishna, Arjuna trembled, folded his hands in adoration, and bowed down. Overwhelmed with fear, he saluted Krishna and then addressed Him again, with faltering voice.

"...Thou art the first of gods, the ancient Soul; Thou art the supreme Resting-place of the universe; Thou art the Knower and That which is to be known and the Ultimate Goal. And by Thee is the world pervaded, O Thou of infinite form. Thou art Wind and Death and Fire and Moon and the Lord of Water. Thou art the First Man and the Great-grandsire. Salutations, salutations to Thee!...I rejoice that I have seen what was never seen before; but my mind is also troubled with fear. Show me that other form of Thine. Be gracious, O Lord of Gods, O Abode of the Universe. I would see Thee as before, with Thy crown and Thy mace and the discus in Thy hand. Assume again Thy four-armed shape, O Thou of a thousand arms and of endless shapes."

The Lord said: "By My grace, through My own yoga-power, O Arjuna, I have shown you this supreme form, resplendent, universal, infinite, and primeval, which none but you has ever seen.

...Be not afraid, be not bewildered, on seeing this terrific form on Mine. Free form fear and glad at heart, behold again My other form."

The disciple has been blessed with a vision transcending the scope of normal human destiny, and amounting to a glimpse of the essential nature of the cosmos. Not his personal fate, but the fate of mankind, of life as a whole, the atom and all the solar systems, has been opened to him; and this in terms befitting his human understanding, that is to say, in terms of an anthropomorphic vision: the Cosmic Man. An identical initiation might have been effected by means of the equally valid image of the Cosmic Horse, the Cosmic Eagle, the Cosmic Tree, or the Cosmic Praying-Mantis. Furthermore, the revelation recorded in "The Song of the Lord" was made in terms befitting Arjuna's caste and race: The Cosmic Man whom he beheld was an aristocrat, like himself, and a Hindu. Correspondingly, in Palestine the Cosmic Man appeared as a Jew, in ancient Germany as a German; among the Basuto he is a Negro, in Japan Japanese. The race and stature of the figure symbolizing the immanent and transcendent Universal is of historical, not semantic, moment; so also the sex: the Cosmic Woman, who appears in the iconography of the Jains, is as eloquent a symbol as the Cosmic Man.