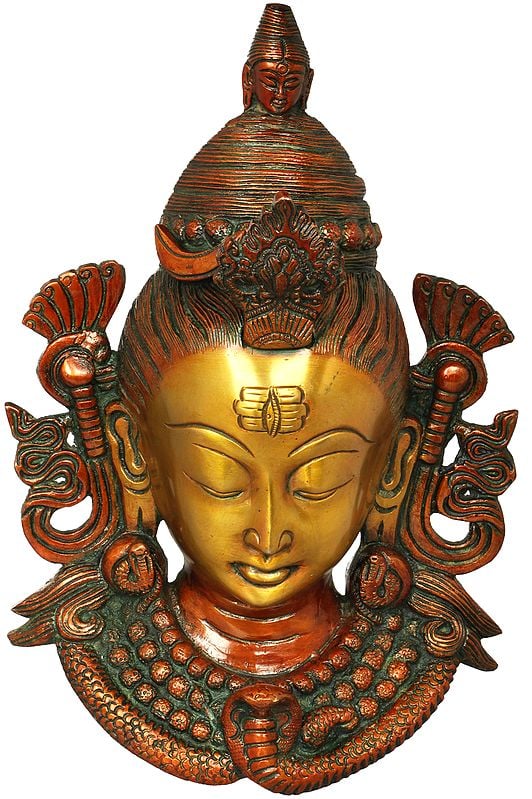 FREE Delivery
$128
Once upon a time, Ganges used to flow only in heaven. During a time of great calamity and endless draught king Bhagiratha did a great penance. Pleased with his selfless sacrifice, Ganges agreed to descend from heaven to the Earth. But the force of water, as the Ganges descended to Earth would have caused a greater destruction. That's when Lord Shiva came to everyone's rescue and bore the brunt of the descending Ganges' force on his divine head of matted hair, letting the divine river on Earth. He has since been known as Gangadhara, the bearer of the Ganges.

This beautiful Brass artifact depicts the head of Gangadhara Shiva in an exquisite feat of handcrafted art. We see his eyes closed in concentration as the mighty Ganges descends through his hair. We see a personification of the divine Ganges herself at the top of this statuesque mask.

Lord Shiva himself is depicted with the usual third eye and a Naga, the cobra snake around his neck. The neelkanth is represented by the three horizontal lines around his throat. The customary crescent moon lies against his hair and the strong downward waves of the river. Lord Shiva is wearing the Naag Kundala, the pronounced snake earrings in his ears. The beads of rudraksha around his neck complete the ornamentation of the fiery ascetic god.