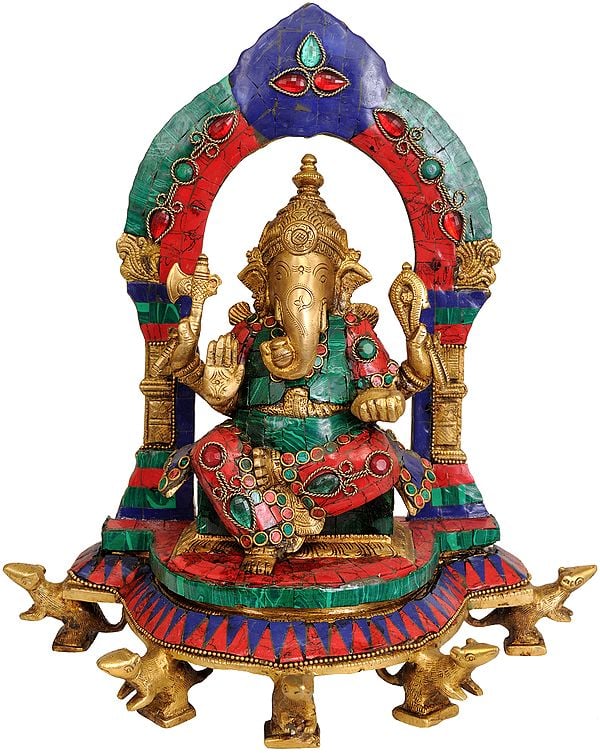 FREE Delivery
$329
Nothing like a vibrantly done up murti of Lord Ganesha to uplift your poojana-kaksha. Lord Ganesha is the most widely adored of Indian deities, given His childlike form and temperament. The son of Shiva-Parvati has an elephant head, a chubby body, and an uncompromising love for laddoos. In this luxuriantly inlaid sculpture, He cradles one in the palm of His left anterior hand. From the attire and shringar of the prince of Kailash Mansarovar, to the pedestal on which He sits and the aureole that surrounds Him, almost the entirety of the work is strategically inlaid with richly coloured bits of resin.
Quantity
Usually ships in 10 days
Notify me when this item is available

Besides the dull golden colour of brass, the colour palette comprises the typical pastels of red and a couple of blues. Note the jewel-like cuts of resin that add to the grandeur of the Lord’s dhoti and are further filigreed to the higher reaches of the aureole. The presence of His vahana, the mouse, is to be found aplenty, a bunch of them seemingly holding up the ornate multi-tiered pedestal their master is sitting on. Note how the head and the hands of the Lord have been kept relatively bare, adding balance and coherence to the composition.