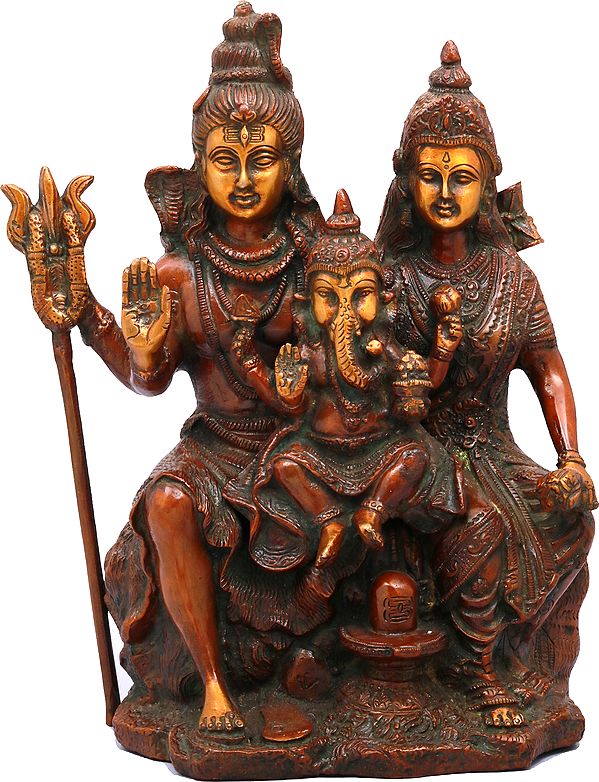 11" Shiva Family (Shiva Parivar) In Brass | Handmade | Made In India

Lord Shiva is one of the main deities in Hinduism. Shiva is known as "The Destroyer" within the Hindu trinity that includes Brahma and Vishnu. His name means Shakti or power and he is known for being 'Shambu' and 'Mahadeva'. He is one of the supreme beings who creates, protects and transforms the universe and is also regarded as the patron God of yoga, meditation and arts. As a householder, he had Parwati as his wife and two sons, Ganesha and Kartikeya.

The perfect and exemplary ménage is captured in this evergreen sculpture. Brass acts as a smooth canvas to be carved into this heavenly model that depicts this beautiful family of Shiv ji, along with Parvati and Lord Ganesha, who rests on their laps, tinted in a greenish black eye-catching color. This statue shows the ideal, elated family for all Hindus to develop.

Mount Kailash was Shiva's abode and Nandi(bull) was his mounting animal. He symbolises wisdom that is beyond the mind but it is expressed with a crescent moon set upon his head and his Damru signifies the universe which is forever expanding and collapsing. Therefore, he remains an example for all Hindus.