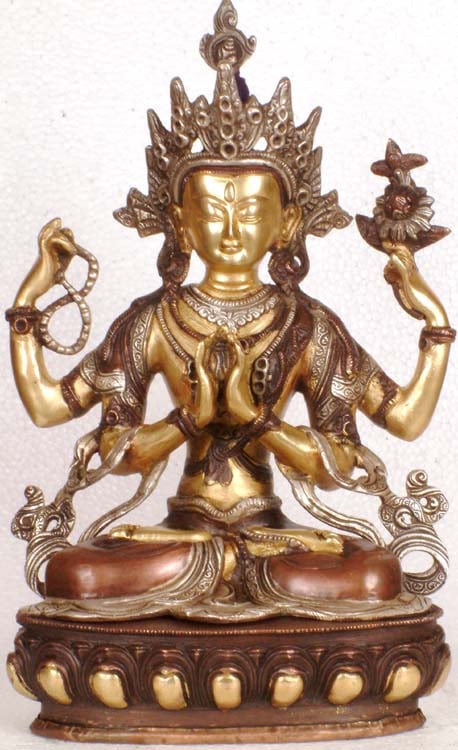 Between Gautama and Maitreya, the Buddhas of the bhoota (past) and the bhavishya (future), respectively, stands the gentle Avalokiteshvara. He directs a sattvika gaze (‘avalokita’) upon ihaloka, the mortal realm of existence, which in some iconographies causes His head to burst into a sahasrara (thousand) form.

A tender aesthetic defines the Avalokiteshvara iconography. The murti that you see on this page is of a four-armed deity in poorna-padmasana, the eyes shut as if in the deepest samadhi (yogic contemplation). His silken dhoti spreads about in hyper-realistic folds beneath His folded limbs, a skilful achievement in terms of the pure brass medium; and a world of sashes and angavastram float about His long, slender torso.

The colour palette comprises a molten gold colour, superimposed with a deep, coppery brown and punctuated with hints of silver. With the five-spired crown on His head and the rosary in one of His four hands, this Avalokiteshvara murti cuts a very solemn picture. As such, it would be a fine addition to the home of any serious, modern-day devotee.