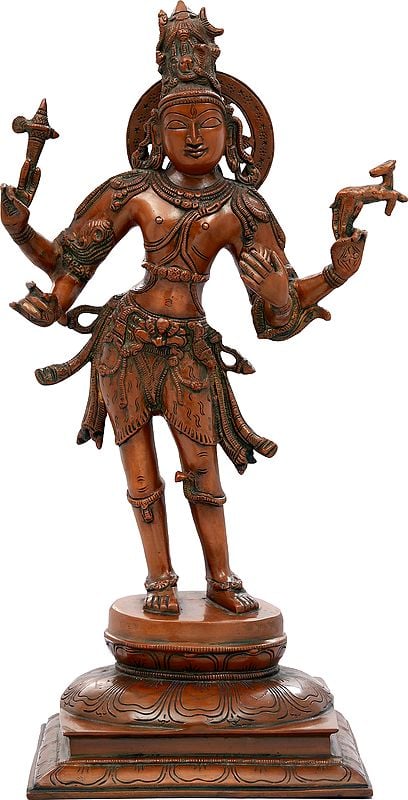 20" Lord Adinath, The Father Of Yoga In Brass | Handmade | Made In India

The Adinath roopa (manifestation) of Lord Shiva is known as the father of yoga. He is considered the first teacher of yoga, having imparted the 84,000 primal asanas to His wife, Devi Parvati. The statement brass sculpture that you see on this page captures the chaturbhujadhari (four-armed) Lord in all His yogic stateliness. In one of His posterior hands is the image of an animal (Sanskrt: pashu), indicative of His status as Lord Pashupatinath, lord and master (pati-nath) them all. In keeping with the iconography of the ascetic, He is dressed in a tigerskin loincloth held in place by streams of rudrakshas and sashes. The hips taper upwards into a narrow waist where a band of rudrakshas is clasped around the narrowest part. It sets off the broad chest and shoulders of the Lord, adorned with dense streams of rudraksha.

A finely sculpted face, engraved with the divinely handsome features. A composure of blissful contemplation, from which emerges vision in the third eye. The same is complemented by a thick, engraved halo. Kundalas and rudrakshas decorate His long ears, and a towering crown, replete with the quintessential snake and moon detail, sits on His head. The broad-based multi-tiered traditional lotus pedestal is one of the most signature aspects of this composition.