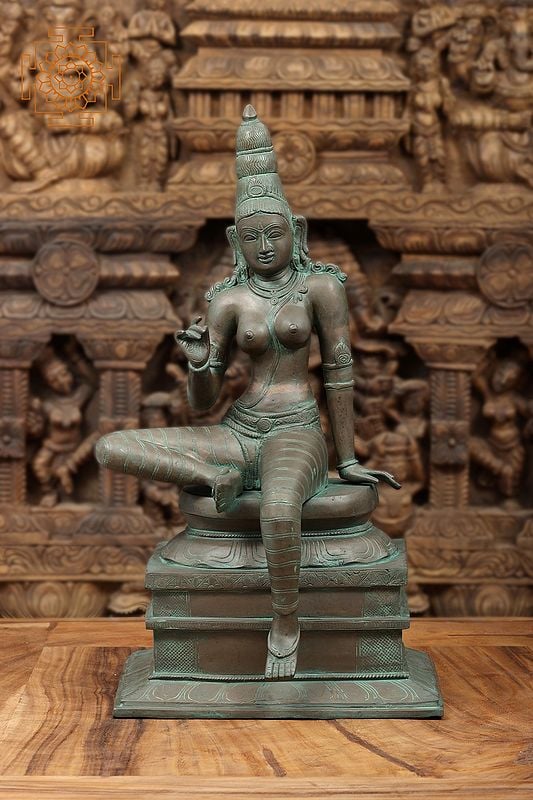 Uma-Parvati, the feminine potency of Shiva and a form of Maha-Shakti, the primordial female energy in Hindu tradition is worshipped in the shrines dedicated to Bhagwan Shiva as the queen of his inner sanctum. An entire convention of Uma icons, where the goddess luxuriantly sits on a lotus platform is dedicated to this aspect of Uma, which is devotionally called “Bhogashakti”- the goddess of pleasure, who appeals to the great ascetic Shiva, inspiring him into action that results in the commencement of the processes of creation.

In this Uma-Bhogashakti statue, the goddess is placed on an upturned lotus pedestal which is kept on another square platform. With one leg folded and another dangling, the goddess is in the posture of royal ease, known as Lalitasana. “Lalita” also means the beautiful one, which does not even begin to describe the celestial form of Lalita-Tripurasundari- the beautiful one who is the most appealing woman in three realms (Tripura), an epithet used for Uma-Parvati. Her luxurious tresses are tied in a high raising knot, making a Jata-mukuta (crown formed out of locks of hair) which gives her presence an imposing feel. Goddess Uma’s divine form is sparsely decorated with fine ornaments and a Yajnopavita (sacred thread), an artistic trope used to keep the attention on the magnificence of Bhogashakti which needs no embellishments. The use of different patterns and carvings on the legs of Uma-Parvati reveals her delicate and patterned dhoti (lower body garment) that clings to her legs. Assured incised lines on the visage of this Devi Uma statue have helped the sculptor bring out the enchanting facial features of the mother goddess. Devi’s left hand is restfully placed on her throne, supporting the weight of her lithesome body, and her right hand is in the “Katakhasta mudra”- a gesture for holding the flower, which the beloved of Shiva offers lovingly to Mahadeva.