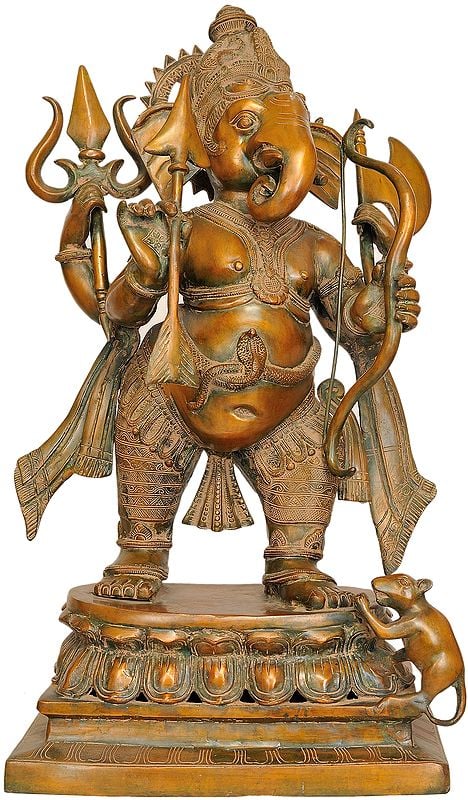 28" The Invincible Yuddha-Ganapati In Brass | Handmade | Made In India

The lord of auspiciousness containing the detrimental forces by his sheer presence, not by using force or arms, in this statue he is quite agitated and eager to resort to arm. Though conceived by blending elements of the sixteen-armed Vira Ganapati and eight-armed Durg Ganapati forms of his iconography, this fully armed form of Lord Ganesha manifests him in a new iconographic idiom that a term like Yuddha-Ganapati, or the warring Lord Ganesha or Lord Ganesha in battlefield, better defines.  As mentioned in various scriptures, Modagalya Purana in particular, Vira Ganapati and Durg Ganapati are two of the thirty-two classical forms of the elephant god’s image manifesting his valiant and victorious forms.

Unlike the sixteen-armed form of Vira Ganapati, and eight-armed, Durga Ganapati, carrying in them a wide range of attributes, most of them just formal or symbolic, this brass sculpture represents him as four-armed – a practically operative image, and the weapons carried in them, usable, effective and realistic. In his normal left and right hands he is carrying bow and arrow, none of them just symbolic or represented motifs-like, and in the upper right, a mighty trident, and in the upper left, a massive battle-axe – all effective and deadly. The bow is properly stringed and is held with forward thrust in readiness to release the mighty arrow he is holding in his other hand. Agitated and furious his forehead, face and trunk are upward inclining, eyes are fully widened, and rest of the face, as well as breast, inflated. This backward surge reflects also in his backward tilting crown and in the unfurling ears. Though a pot-belly usually defines his images, as the battlefield conditions required, in this statue it is largely contained, though also duly secured by a ‘naga-bandha’ – serpent-band, Lord Ganesha’s standing statues are rare; here not just standing, he has been represented as moving with determined strides.

This form of the delightful lord who is invariably portrayed in queerish postures and with a smile on face, has in this statue a furious demeanour, and more so, inclining to use arms, no matter even against errant and wrong-doers. Elephant goad and noose are his chosen weapons by which he drives and keeps his devotees to the right path. When seeking to punish the moon for its misconduct he simply uprooted one of his teeth and hurled it on the celestial body. He felt insulted when serpent Vasuki laughed at him. He could punish the serpent but preferred to catch hold of it and tie it like a belly-band around his belly for securing it against extra quantity of food he consumed. As the tradition has it, once he was on a walk for digesting the ‘laddus’ he had over-eaten but suddenly his abdomen burst and ‘laddus’ rolled out. Serpent Vasuki, passing across, witnessed the incident and laughed at him. Instead of punishing the serpent he first collected the ‘laddus’ and re-stored them back in his abdomen and then caught Vasuki and tied it around his belly for securing it. So unlike him, in this statue this same delightful Ganesha is in fury.

The four-armed standing image of Yuddha Ganapati has been installed on a three-tiered rectangular pedestal consisting of a plain base moulding surmounted by a similar moulding in the centre though with an over-sized top and not as large in length and breadth as the base moulding. The upper moulding consists of an inverted lotus topped by a plain cushion. Lord Ganesha’s mount the tiny mouse is trying to reach its master and is already on the mid-height of the pedestal. As befitted a warrior Lord Ganesha is in ‘antariya’ but as tight-fitted as breeches and well secured by an elaborate girdle. In far widened legs the central-‘pata’ hung in between looks like an independent unit. Besides the ‘nagha-bandha’ he is also putting on breast-band and shoulder-bands. A strong headgear apart the ornaments that he is putting on are only a few and all those as are used commonly in his images.