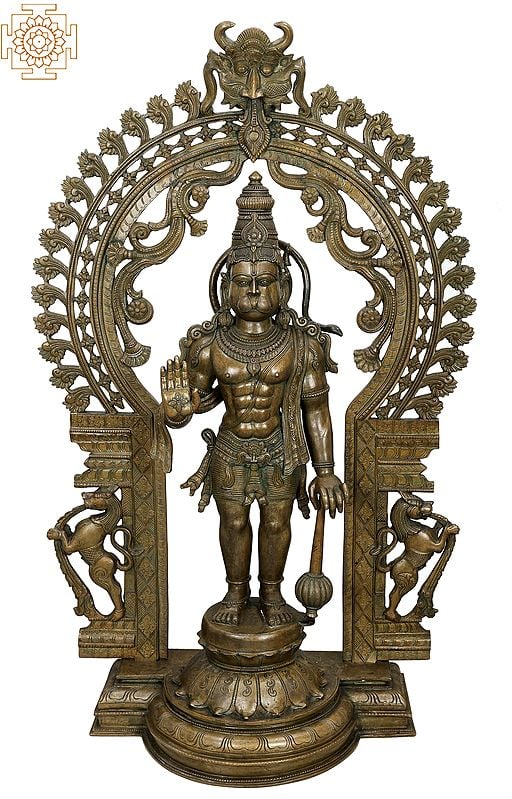 Anjaneya is the name of Lord Hanuman that expresses His identity as the son (‘eya’) of Anjana. He is the son of Vayu and Anjana, known for His invincible strength and valour. On the pistil of an upturned lotus bloom He stands, tall and stately with the right hand raised in blessing, while the left hand holds a goad with its head turned down upon the ground. As such, the stance is gentle and generous, as opposed to the usual warrior iconography of Hanuman.

A tall, tapering crown on His head whose tip nearly touches the Kirtimukham at the highest point of the prabhavali (aureole). Behind His head flourishes the tail in one fell curve around the halo. Note the kundalas (danglers) on His karna (ears), which resemble His signature weapon in terms of shape. A short dhoti and strategically positioned adornments reveal rather than conceal the superb musculature of the great yogi.

The Yali brackets on either side of the central standing figure and the richly carved prabhavali, together create an impression of a temple surrounding the Lord. Made from madhuchista  vidhana (as the lost-wax technique is known in the Agamas), such a seriously detailed bronze takes several weeks, if not months together, to be finished. 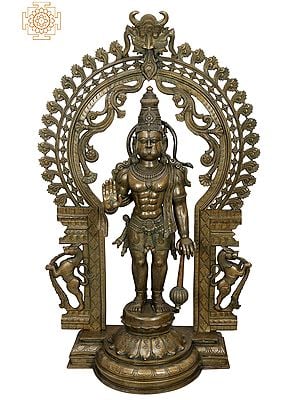