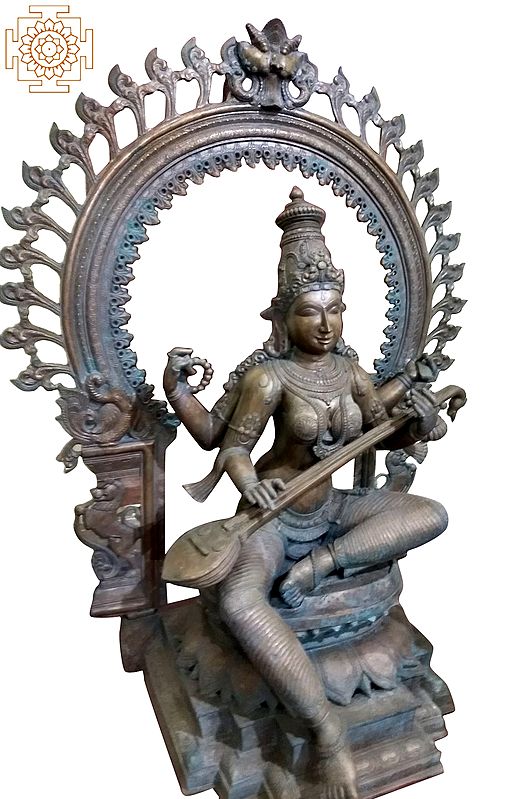 The one hundred and eight names of Devi Sarasvati which form the Ashttotara Shatnama of the goddess poetically describe the transcendent imagery of the goddess of wisdom and inventiveness. Sarasvati is called Mahamaya- the greatest of all illusions. This Swamimalai bronze is an artist’s ode on the divine brilliance that is goddess Sarasvati.

Lotus, the symbol of purity is an integral part of the physical appearance of Sarasvati. She is padmasana- one who sits on a lotus flower, Padmakshi- one who has lotus-shaped eyes, and Padmavaktraga- whose face is as beautiful as a lotus flower. The great goddess who rules the sphere of unadulterated wisdom is beyond worldly chaos. Like a lotus that blossoms in muddy water, but remains untainted, Sarasvati while being involved in the human world, is above its triviality. Devi Sarasvati is Chaturbhuja, four-armed, and Pustakdhrit, one who holds a book. The book and rosary in her hands represent Gyan (knowledge) and austerities. In her main hands, the goddess holds a veena, known as the Sarasvati veena after her. Vidyarupa, the personification of knowledge, goddess Sarasvati accompanied by her attributes grants boons of prodigious wisdom. The great deity of knowledge is equally appealing in physical appearance. This handmade Panchloha bronze has fruitfully captured the enchanting beauty of Kamrupa- the embodiment of desires. She has a slender waist, thin limbs, and rounded breasts. A verse from Rig Veda evokes Sarasvati by asking her to provide nourishment through her “inexhaustible breast”. The great goddess is filled with maternal instincts as a young maiden and revered to receive her affectionate varada-hasta. The magnificence of goddess Sarasvati in this bronze statue is heightened by high-rising mukut and gemmed ornaments. Sarasvati sits in Lalitasana, the royal posture, with her right leg placed on the ground, asylum for those seeking refuge from the illusionary world. A fiery Prabhavali with Kirtimukha on its top, surrounds the Devi, defining her presence, the aura that wraps her heavenly form. On each side of the Prabhavali sit a swan, the vahana of Saraswati and a symbol of purity. The countenance of goddess Sarasvati emits a Shaant-bhava- the emotion of tranquillity achieved by her authority over the Ultimate Truth. In this glorious bronze idol, the goddess Sarasvati is Triguna- the epitome of a balance of three qualities- Sattva, Rajas, and Tamas, desired by sages and kings alike. 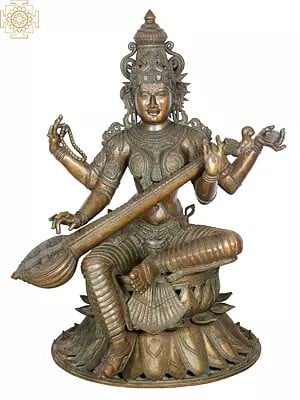 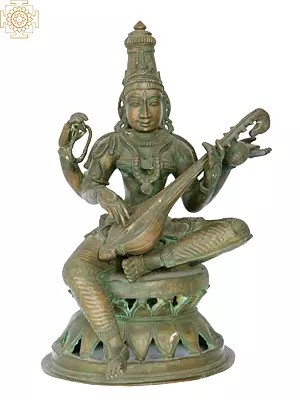 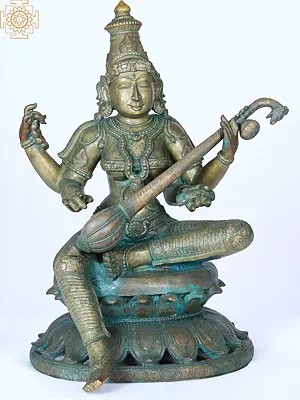 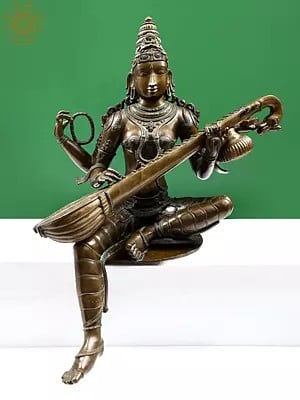 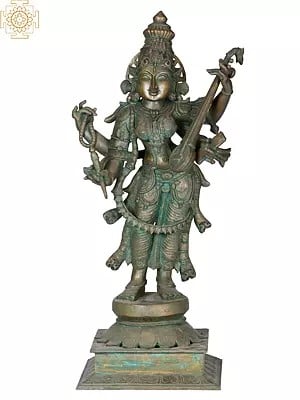 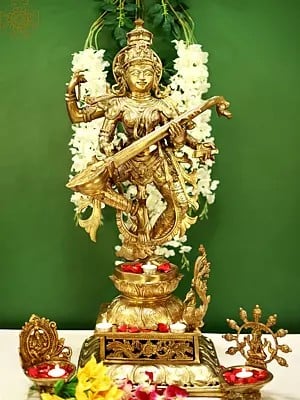 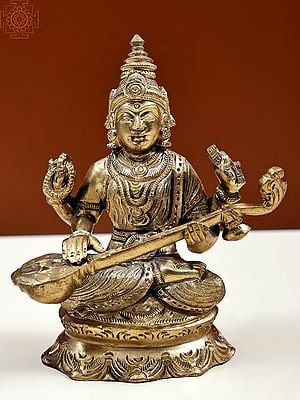 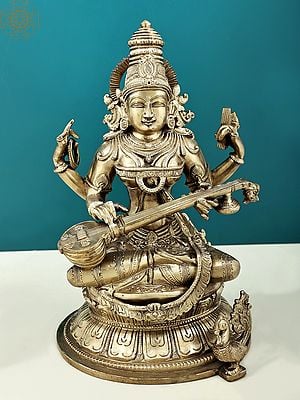 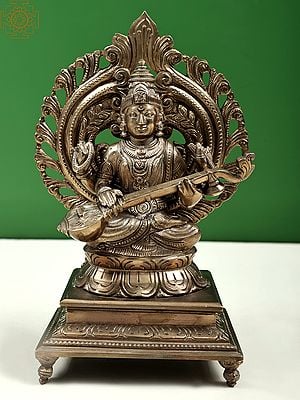 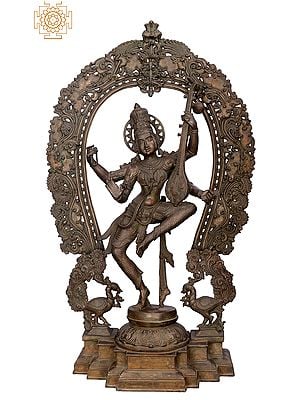 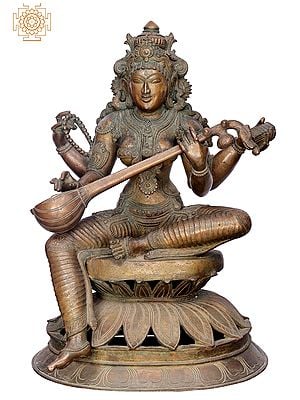 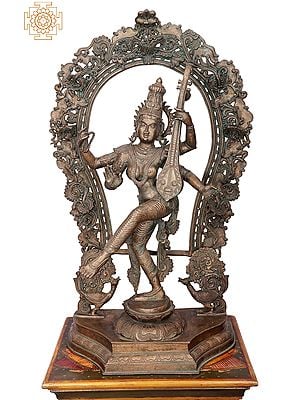 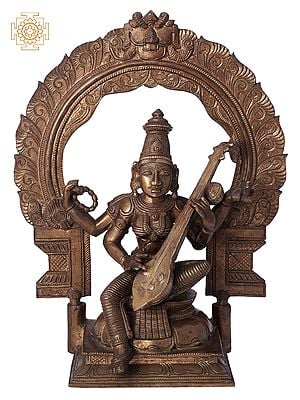 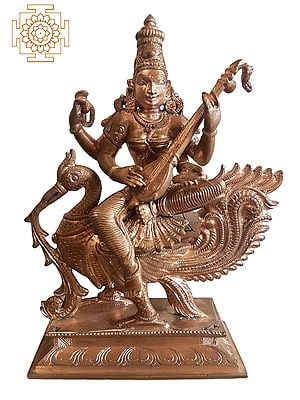 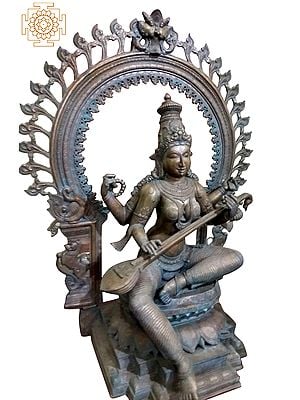 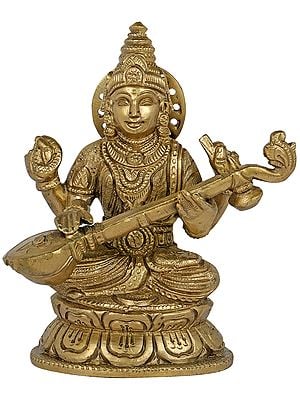 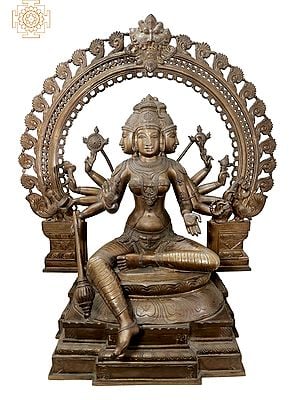 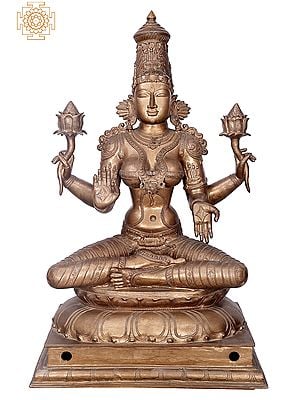