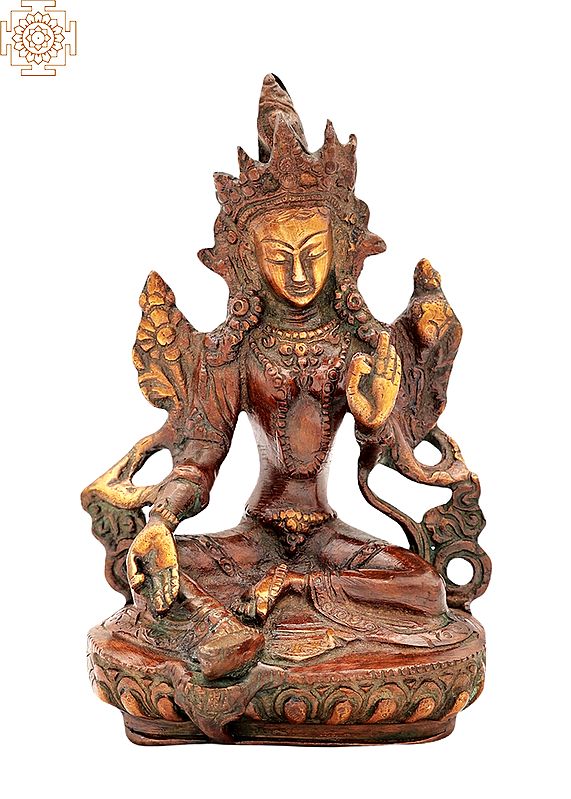 Green Tara is a tutelary deity who is patron of all the others. She is arguably known as the most popular female Buddhist.  She is the protector of those who calls upon her in their physical, emotional and spiritual suffering. She is represented seated, dressed as a Bodhisattva who holds a blue lotus in her hands. She is considered the goddess of fortune and is called Dhananda. She sits on a plinth of lotus that symbolizes divine birth and purity. She is richly ornamented with jewels and a tiara.

Green Tara is also an acknowledged shapeshifter who appears when you are in her need the most. Among all Tara incarnations, the Green Tara is known for protecting devotees from harm. Green Tara has a distinguish posture that separates her from other Taras. She has her right hand in the giving mudra of generosity and her left hand holding a lotus flower.

The brown brass sculpture of Green Tara highlights the pleated folds of her costume as it elegantly falls on her leg and lotus. Notably, she has her right leg outstretched, ready to spring into action. She is always available to help, guide and assist anyone who is in her need. The carving double Chola statue is inspired by the Chola dynasty that represents the richness and sumptuousness of the era. The old dynasty was significant for the development of Tamil culture as explicit in the maturity of this ancient piece. The ochre brass statue of Green Tara would bring an end to the never-ending suffering and fill your place with positivity.