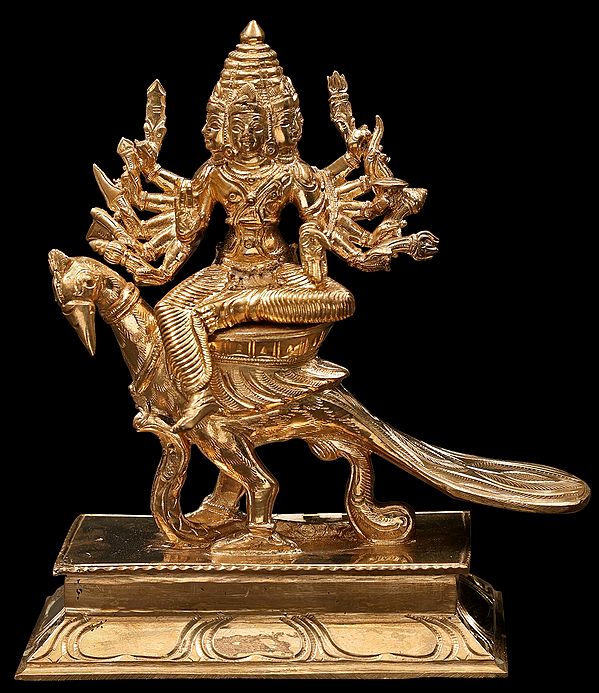 As the fearsome Hindu god of war, this ‘panchaloha’ bronze image of Karttikeya manifested in his six-headed avatar is as majestic as it is powerfully symbolic in our mythology and religion. Literally, ‘of the Krittikas,’ Karttikeya’s imagery is based on the legend of his birth, where the six brightest star clusters – ‘Krittikas’ – take care of him and rear him as their own child. To therefore satiate the want of every single mother, Skanda transforms into a six-headed being, allowing him to look at each ‘Krittika’ and nurse one aspect of him.
Ships in 1-3 days
Notify me when this item is available

The Tirumurugatruppadai, detailing the life of Skanda as Murugan, describes these six aspects as: removal of ignorance, granting boons, watching over devotees, providing self-realisation, annihilating ‘adharma,’ and showering love. Moreover, it is that fifth aspect of annihilation that best suits the presentation of this sculptural image – seated in the royal ‘lalitasana,’ Karttikeya is shown brandishing weapons like the sword, mace, thunderbolt, the eternal fire, and axe, in each of his hands. We also note his two hands in the front in the ‘abhaya’ or fear-dispelling mudra and the ‘varada’ or boon-granting mudra. His body is ornamented with a heavy ‘dhoti’ covering his legs, a ‘yagnopavita’ across his torso, and seated on his mount, a peacock, that symbolises purity. Interestingly, we also see a snake with its raised hood under Karttikeya – perhaps a subtle nod to his familial relation with his father, Shiva.
Add a review
Have A Question