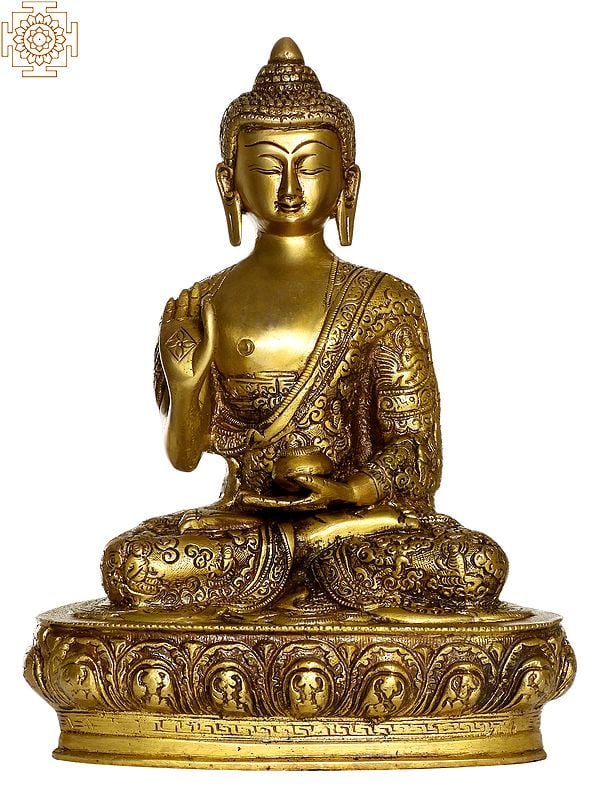 9" Blessing Buddha In Brass | Handmade | Made In India

Lord Gautama Buddha is believed to be the sole founder of Buddhism and his teachings are entirely concerned towards defining a path free of worldly pleasures and liberating sentient beings from suffering. The bliss that you perceive as you look at the face of this Buddha sculpture makes you feel in heaven; the superfine carvings of his sharp nose, the satisfactory smiling curve of the lips and the half-open eyes reflect that real essence of calmness and peace. The sacred mark on his palms is a result of him being enlightened from within. In this posture of padmasana and vitarka mudra, Lord Buddha teaches his disciples of the four noble truths of dukkha (the truth of suffering), samudaya (cause of suffering), nirhodha (end of suffering) and magga (the path that frees us from suffering).

The pedestal on which he sits is beautifully carved with triple-layered lotus petals popping out from the front, and the back image depicts the three major instances of Lord Buddha’s life. Starting from the left, Buddha is teaching his disciples of the universal truths of life, then in the centre image, he is meditating under the Bodhi tree and the last image shows his state of parinirvana. Zoom in to the image to appreciate the flawless carvings of these stages of Buddha’s life, chiselling even the minutest details with utmost precision.

The eye-catchy aspect is held with the robe, having been flourished with clear and fancied formations of clouds and If you look carefully, the entire robe is marvellously sculpted with various life-changing instances from Buddha’s life including the four legendary sights of an old man, a sick person, a dead body and an ascetic. The horse carved towards the right is Kanthaka, on which he left his palace to start an ascetic life. The beautiful woman dancing at the bottom beside the meditating Buddha, is the celestial demon Mara, busy tempting Gautama by trying to seduce him. Available in two exotic colours, this Buddha sculpture is a perfect artefact to depict Buddha’s life in a subtle and creative style.