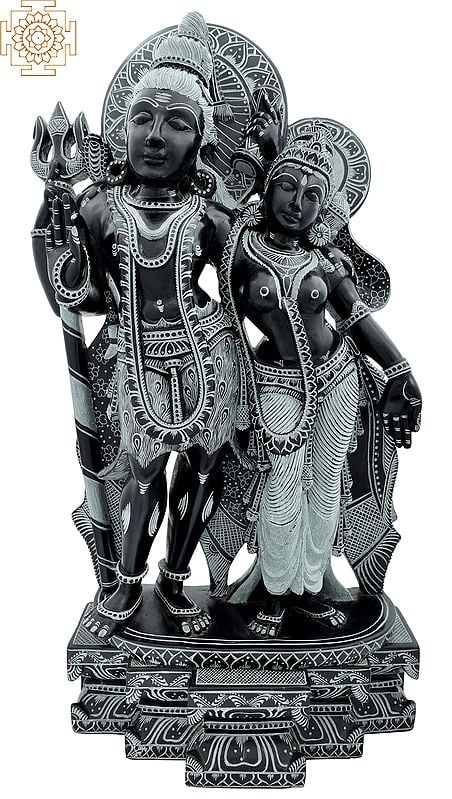 Lord Shiva being the predominating deity of Tamo Guna (mode of ignorance), is responsible for the destruction of the material world to start a new creation and to free the conditioned souls from the bondage of this unreal and temporary material world. Devi Parvati, the daughter of the King of Mountains, ‘Himavat’, also known as ‘Parvat’, is the Mother of material nature exhibiting forms which are gentle and nurturing for sustaining the universe. When in rage, She manifests into ferocious forms such as Durga and Kali having eight or ten arms holding various weapons. Being an incarnation of Shakti, the recreative power of Lord Shiva, She bestows wisdom and grace upon the devotees and makes them attain the blessings of the Lord for their spiritual upliftment.

Just as heat cannot be separated from fire, and sunlight cannot be separated from the Sun, Lord Shiva and Goddess Parvati, the divine couple are inseparable. The transcendental and unborn Lord, being beyond time and death, would be nothing but a dead matter without His Shakti (the energy in motion). She is like the ocean full of waves, always in motion and Lord Shiva is a calm sea. Garlanded with a serpent, holding a Dumroo and a Trident, and wearing the Tiger skin stands an ascetic yogi and a great Grihasta with His wife, Goddess Parvati - depicting an eternal, unconditional, and uninterrupted loving relationship. The epitome of beauty and strength, Devi Parvati, is always in the mood of serving and worshipping Her Lord with love and devotion.