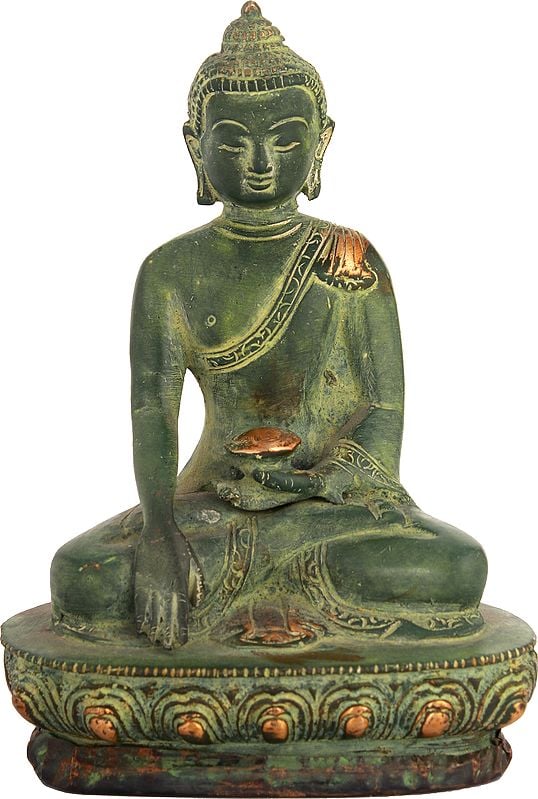 Buddha Seated On A Lotus, His Hand In Bhumisparsha Mudra

When Buddha attained enlightenment under the Bodhi Tree, he is said to have summoned the Earth Goddess, Sthavara, to bear witness to the cosmic event. The Bhumisparsha mudra, which Buddha used for this summoning, literally means the posture of touching the earth. This mudra, sometimes also called the Earth Witness mudra, is formed with the fingers of the right hand extending to touch the ground, while the left hand is held in his lap, either in dhyana mudra or holding an alm’s bowl. This exquisite brass statue of Bhumisparsha Buddha is available in five colours: Antique green gold, bronze hue, double chola, green gold and Indian cocoa. Buddha sits in full-lotus pose, the padmasana.

Buddha’s left hand holds the alms’s bowl, signifying renunciation while his right points down to the earth in Bhumisparsha Mudra. The auspicious Urna mark in the center of the Buddha’s forehead symbolizes the third eye or the divine world, an ability to see past our mundane universe of suffering and out into the truth of enlightenment. For the best spiritual vibrations, the statue of Bhumisparsha Buddha should be kept facing east, towards the rising sun.