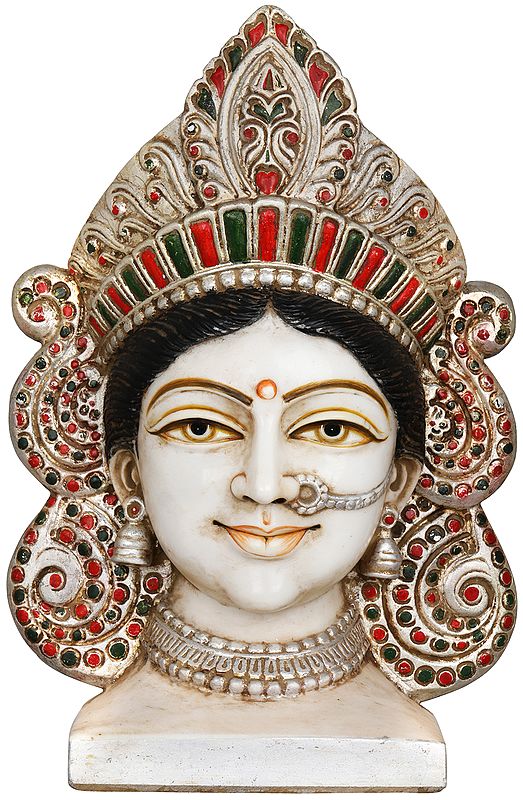 The Chhavi Of Mother Durga

FREE Delivery
Only 1 available
$1395
Devi Durga is an unusual Devi. A roopa (manifestation) of Devi Parvati Herself, She was birthed under great havoc wreaked upon every loka (realm of existence) by Mahishasura, the seemingly invincible buffalo-demon. She is omnipotent and invincible above all else Herself; born with ten arms, each wielding a weapon that sends shivers down the adharmee’s spine. The chhavi (image) of Her that you see on this page captures nothing of that ferocity but, instead, the pleasing beauty of Her mukhamandala (countenance).

A Devi of glacial complexion (Her home is the Kailash Mansarovar, which She shares with Her husband Lord Shiva). Large eyes brimming with wisdom, nay, omniscience. A full-featured face composed in unearthly compassion. She is youthful and beauteous and maternal, each of these qualities enhanced by the shringar of Her bust. A nose-ring that traverses the cheek all the way to the ear, a choker on that long lovely neck, and kundalas (danglers) held in place by miniscule rubies.

A crown of silver frames the face of the Devi Durga. Its style is in keeping with her traditional iconography as is replicated in the annual worship of Her in the Eastern Delta region. Dense black hair parted down the middle is revealed gently beneath the rim of that crown. The same is luxuriantly studded with rubies and emeralds, and it befits Her divine status as the supreme vanquisher of adharma.