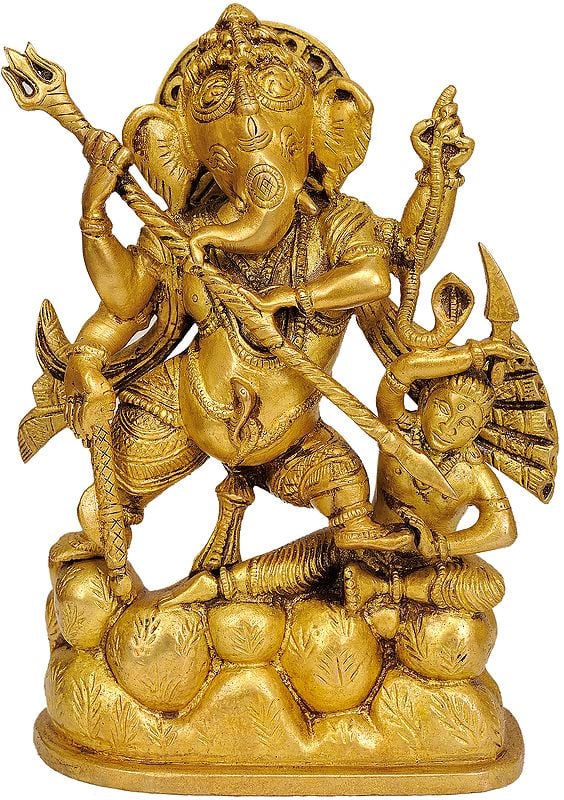 $195
Quantity
Notify me when this item is available

This image of Lord Ganesha, a form of the elephant god conceptualized altogether differently as he is rarely seen, in the entire body of mythology or sculptural tradition, as destroying or even punishing anyone, a demon or whoever, represents him as killing a demon with the mighty blow of his spear. Though he commanded unruly ‘ganas’ for enabling Brahma effect Creation, and was present when Lord Vishnu destroyed Mahabali, Lord Shiva, Tripura, and Durga, Mahishasura, or punished Moon or serpent Vasuki for their mischief, no text, tradition or myth since the Yajur-Veda, the earliest known text to allude to him by a personalized name, saw Lord Ganesha as the demon destroyer or resorting to violence. Even in punishing Moon or Vasuki he seems to be teaching them a lesson. Ganesha is primarily invoked for promoting love, goodwill, trust and to lead the mind in right direction. In long tradition of Ganesha cult it is by his mere presence that he accomplished all good. Strangely, this image represents him annihilating a demon by the very act of his body.

A brass artifact adequately finished but retaining the shaded parts, incising grooves or linear effects and subdued zones as under the neck, endow it with brilliant contrast of light and shade and attribute to it a two-colour look and greater dimensional effect. A dwarfish figure of the elephant god, especially the queerish looking calves or rather the legs not in proportion to the rest of the figure, represents the elephant god as trampling on the figure of a demon. While his right foot is fixed on a mountain peak, he has crushed the demon with his left, and overwhelmed by such sudden blow it is with great difficulty that the demon is able to hold and sustain. He seems to raise his dagger but before his hand moved the elephant god’s mighty serpent rode over and disabled it. Besides, with its mighty blow Ganesha’s sash, though a piece of mere ensemble, shatters his remaining confidence. The mountain range consisting of a number of hills a large part of which the demon’s figure covers suggests the magnanimity of the divine action, and the size and strength of the demon. With dismay in eyes the demon helplessly lay under his feet.

Lord Ganesha’s standing statues, dancing and others, both in classical and contemporary traditions, are found in abundance; however this demon-slaying image with such exceptionally commanding posture is rare in art. Most powerfully gesticulated the forward-inclining firm move that this statue manifests is absolutely different. Though the legs are wide-spread affecting stature, his figure has been a warrior-like straightened and the face reveals a sense of toughness, characteristic to Lord Vishnu in his cosmic commander form. Dance is the inherent element of Ganesha’s iconography; however this image is completely bereft of it. The statue represents him as Ekadanta – single-tusked, the most prominently represented aspect of his image. Ekadanta symbolises single-mindedness, the essential attribute of this image.

The image has been conceived with four arms, the downwards turned upper right hand carrying a ‘dand’ – rod, and the upper left, a massive serpent. In normal right and left hands he is holding his deadly spear-cum-trident; with spear-end he is piercing the body of the demon. Represented as trampling a demon’s figure under his feet, his eyes reveal anger, and his face, a demeanour not usually seen in his imagery. Usually knotted and turned to left, his trunk in this image is quite straightened and flung to right. Usually the images of Lord Ganesha are modeled with a helmet-type crown. In this image the crown that he is putting on is more like a beautiful hair ornament. The halo consisting of stylized lotuses appears to be the crown’s component. Besides lavish and elaborate jewellery he is putting on his usual ‘nag-bandha’ – bellyband consisting of a large serpent, and a beautiful ‘antariya’ – lower wear, and as beautiful, a sash.