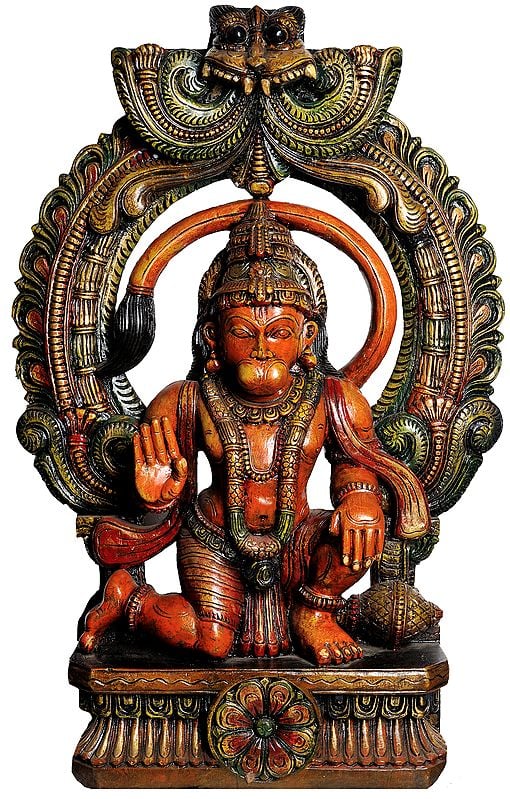 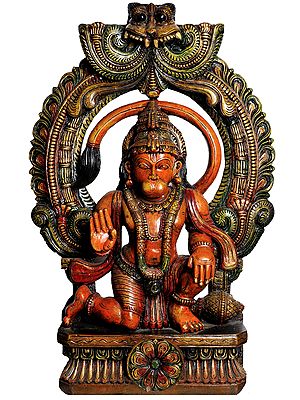 $995.00
The character of Lord Hanuman shines the brightest in the revered Ramayana pantheon. In His bhakti to Lord Rama, He establishes Himself as a yogi of the highest order. While the sanskrt word ‘bhakti’ is usually understood to mean devotion, it is more akin to unconditional love. Bhakti in itself is an independent yogamarga (‘marga’ is Sanskrt for path/way), acclaimed by Lord Krishna Himself as the superiormost of all yogamargas. In this superb composition made from wood, Lord Hanuman is kneeling on a single knee with His powerful tail swishing behind His head. Because this is an example of traditional South Indian temple architecture, the ornately engraved crown and the volume of shringar are in keeping with the prevalent style and iconography. From the fiercely determined composure of countenance to the invincible stance of His body, this Lord Hanuman murti captures the very essence of the Lord.

The Lord is seated on a signature pedestal. Framing His figure is an imposing aureole. These two elements form a temple around the deity. The elongated lotus petals and the midline motif of the pedestal are hallmarks of traditional temple sculpture. Zoom in on the swaying lotus petals of the aureole and the concentric curves of motifs. Together with the formidable kirtimukham at the zenith, the same have been made with a remarkable level of symmetry and attention to detail.

This item can be backordered
Time required to recreate this artwork
20 to 24 weeks
Advance to be paid now
$199.00 (20%)
Balance to be paid once product is ready
$796.00
Notify me when this item is available
Save to Wishlist Send as E-card Share by Email