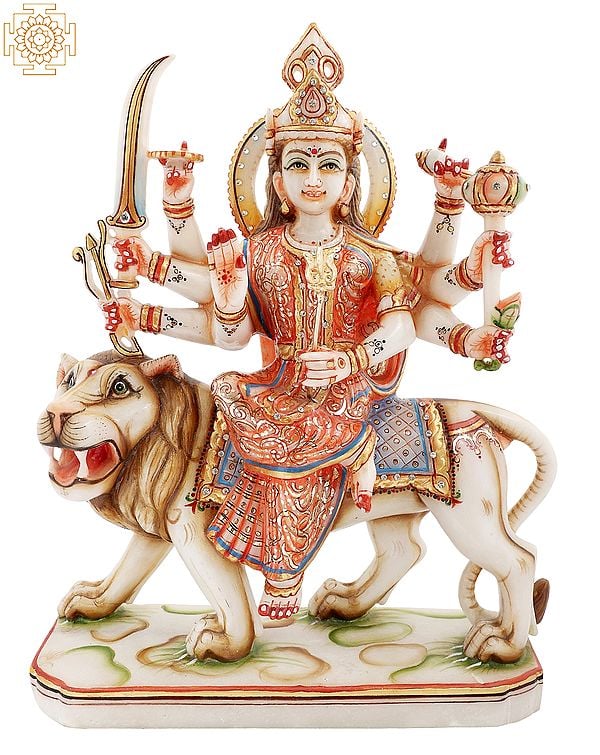 Goddess Durga is a major deity in Hinduism. She is worshipped as a principal aspect of the mother goddess Devi and is one of the most popular and widely revered of the Indian divinities. As per Puranas, she has 108 names. One of them is called Sherawali Maa. Skanda Purana tells us that Durga is the warrior aspect of Devi Parvati.

The legends tell of the time when Parvati did tapa for thousands of years to get Lord Shiva as her husband. Due to the strictness of penance, her fair skin became darker. Lord Shiva was pleased and married her. Once Shiva called her Kali (the dark one) during a conversation and Parvati got angry and left Kailash. She went again to the jungle to do tapa to get her fair complexion back. In the jungle, a lion came to eat her, but realizing her power, became her servant, as the goddess continued her tapa. Lord Shiva was pleased once again by the ferocity of her penance and granted her original complexion back to her. Parvati came to be called by a new name, Gauri, meaning, the fair one. She was so very pleased that she granted the lion a place by her side. This pristine statue of Maa Durga and the lion is artistically crafted out of superior quality white marble. Here the warrior goddess is shown with eight hands. Her right hands are holding a chakra, a sword, and a bow-arrow while her left hands are holding a conch, a mace, a flower, and a Trishul. She appears to be in a pleasant mood. Her right hand is in Abhay mudra offering protection to the devotees. This status should be kept in the south-eastern corner of the house or workplace. As a devotee, we must surrender all our duties and activities to Maa, and she assures us to release us from all physical, mental, and spiritual miseries.