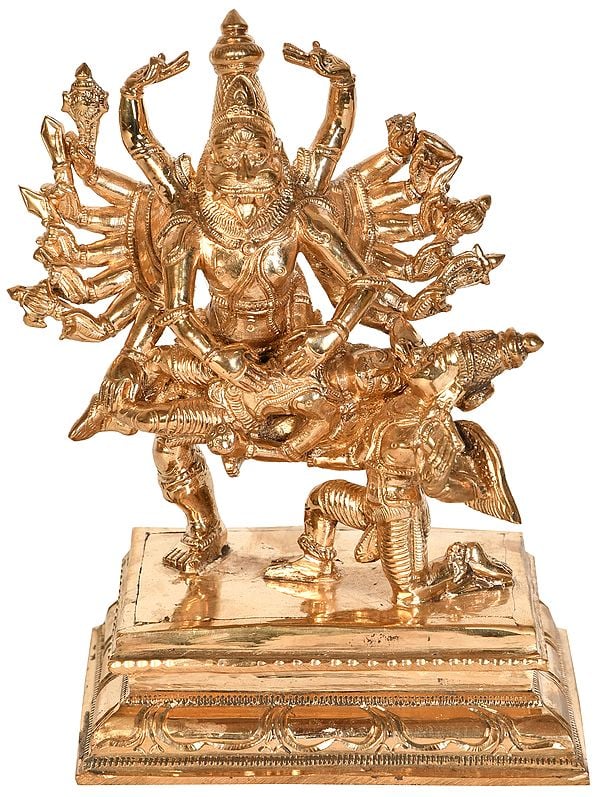 $795
Quantity
Notify me when this item is available

This magnificent bronze cast,a tiny statue seven inches in height, five and half inches image proper, and three point four inches podium – a rectangular base, represents Narasimha, the 4th of the ten incarnations of Lord Vishnu. Narasimha was Lord Vishnu’s half man and half animal incarnation he had taken to for killing demon Hiranyakashipu, the father of Prahlad, a great believer of Vishnu. The sons of Diti by sage Kashyapa Hiranyaksha and Hiranyakashipu were two notorious brothers, the progenitors of the clan of demons. They had pleased Brahma with rigorous penance by which Hiranyaksha was granted that he could not be killed by either a god or a human being, and Hiranyakashipu, that he shall not be killed neither by a god, animal nor a human being, nor during the day nor during the night, nor inside the house nor outside it, nor on the earth nor in the sky and by none of the weapons.

With their exceptional powers both, Hiranyaksha and Hiranyakashipu, grew greatly arrogant. As a result Hiranyaksha one day dragged the earth into ‘patala’ – nether world, and also Brahma’s Vedas, that is, the life that the earth symbolised, and the light that the Vedas stood for. Then Vishnu incarnated as boar and killed Hiranyaksha with its tusks and restored to Brahma his Vedas, and placed the earth in its place. For killing his brother Hiranyaksha Hiranyakashipu was extremely annoyed with Vishnu. He not only banned his worship within his territories but even uttering his name was declared punishable. However, his own son Prahlad turned into a Vishnu’s believer and despite repeated warnings he did not give up commemorating Lord Vishnu’s name. He made several attempts even to kill him but every time the result was contrary. Prahlad used to claim that Lord Vishnu was omnipresent.

One evening during twilight, when it was neither the day nor the night, Hiranyakashipu challenged Prahlad if his Vishnu was present also in the wood-frame of his door. However, before Prahlad replied, the door-frame burst and from it emerged a fiercely roaring divine figure with fiery eyes, projecting teeth, a lion’s face and jaws, terrifying open mouth, and the man’s body. Neither the man nor the animal but a being combining both the divine form – Narasimha – half man, half lion, caught hold of Hiranyakashipu, dragged him to the centre of the door, lifted him on its left thigh, and tearing with its nails the demon’s bowels killed him. The divine figure was neither the man nor the animal; the twilight hour, neither the day nor the night; in the centre of the door it was neither inside the house nor outside it, lifted on its thigh he was killed neither on the earth, nor in the sky, and torn with nails no weapon was used in killing him.

The image of Narasimha has been installed on a two-tiered podium, base unit, an inverted lotus form, and the upper one, a lotus opening upwards and holding over it a plain moulding. The podium is a perfect square and is largely simplified but perfectly matched to the overall model of the image. In most other representations – a stone sculpture, wood-carving, metal cast, or canvas painting, Narasimha is represented as seated over a raised platform in ‘lalitasana’ holding Hiranyakashipu on his left thigh and tearing his bowels. Requiring far greater skill, the artist has cast in this statue the image of Narasimha as dancing. Balancing the entire figure on one leg, and that too, with its heal slightly lifted, the Narasimha’s dance is exactly similar to Lord Vishnu’s Vishnukranta that he performed later in his fifth incarnation as Vaman known as Trivikrama for subduing arrogant Bali or Mahabali, the great grandson of Hiranyakashipu.

In VishnukrantVaman shoots his left leg a missile-like forcefully to right exactly parallel to the earth, while the right is bent at 120 degree angle. However, while with his missile-like shot leg Trivikrama pushes Bali into ‘patala’ – nether world, Narasimha uses it for holding on it the figure of Hiranyakashipu. With a different aesthetic taste the artist of this piece does not conceive the image of Hiranyakashipu as ferocious as described in texts. He has well-trimmed moustaches and a benign face and his figure manifests the beauty of rhythm. The podium also houses a winged celestial being who with his jubilant gestures hails the act and accords to it divine sanction. A tougher alloy like bronze the artist has manipulated it to yield a gold ornament’s details – precision, overall sophistication and made it to breathe a kind of classicism, divine aura, and beauty par excellence.