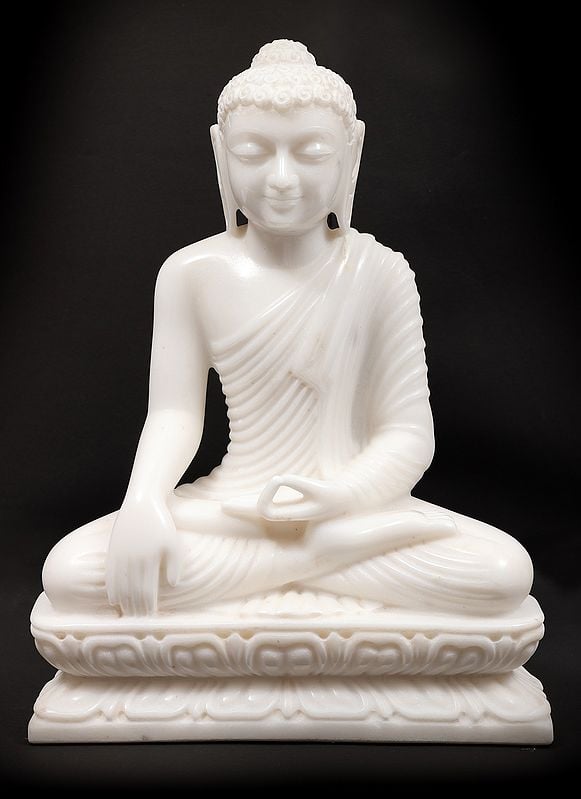 Pristine Monotone Buddha At The Juncture Of Enlightenment

In the modern idiom, the Buddha is everything that the colour white is associated with. A mood of placidity and profound contemplation characterises this Buddha composition. Seated in padmasana upon the belly of a lotus, the erstwhile Shakyamuni smiles through large, half-shut eyes. The stance is of great significance in yoga. Padmasana, which translates to the stance (‘asana’) of the lotus (‘padma’), is the culmination of bahiranga yogic prowess and integral to attaining the antaranga. Having led the life of a wanderer and an ascetic and a mendicant, it took the former prince no more than a few years in padmasana under a Bodhi tree to attain Enlightenment.

The murti that you see on this page captures the monk at the juncture of Enlightenment. The fingers of the right hand gently touch (‘sparsha’) the earth (‘bhoomi’) beneath Him, a gesture (mudra) known as bhoomisparsha. Myth has it that the Buddha had called upon Mother Boomi Herself to witness His transition.

Monotone and perfectly symmetrical but for the mudra of each hand, a one-of-a-kind sculpture such as this one would be a tasteful addition to the home of anyone with an appreciation of yoga and Buddhism. Zoom in on each aspect of the Buddha’s anatomy in order to appreciate the finesse and uniformity of the workmanship.