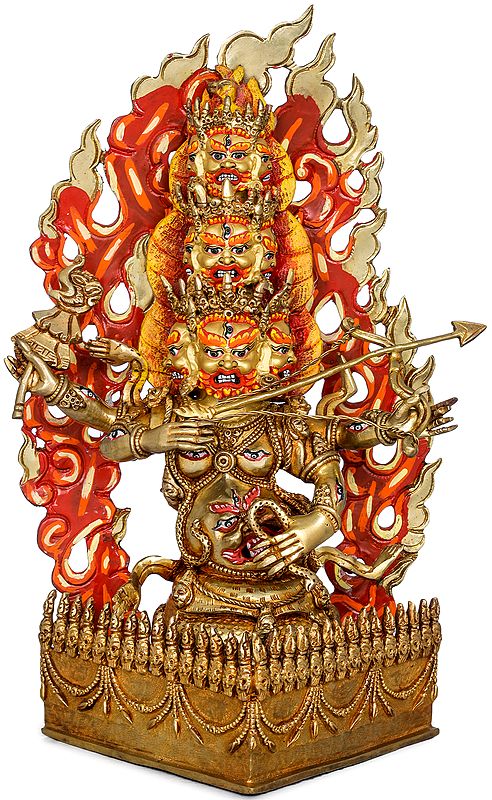 $1395.00
Quantity
Notify me when this item is available
Post a Query

Rahula is known to Tibetans simply as Za. He is half serpent and half humanoid. The lower part of his body is coiled and his upper body is covered with numerous eyes, all of which glare balefully. In the pit of his stomach is a cavernous mouth which, with the eyes of his upper body, give the feeling that his whole torso is a massive glaring face. He has nine heads, arranged in three tiers of three, each with three bulging eyes. A great breath of sickness is believed to issue from their fanged mouths. From the crown of the topmost head issues the gruesome, cawing head of a raven.

In his hands he holds various weapons, including a bow, arrow, a writhing sea-serpent and a dragon-headed goad which guides us to righteous action.

According to ancient Indian mythology, Rahu (Rahula) was a titan who disguised himself and tried to steal the nectar of immortality from the gods. The sun and the moon both exposed him to Vishnu who promptly cut off his head. It is believed that Rahu avenges himself by periodically swallowing up the sun and the moon, thus causing eclipses. He is hence known as the Lord of Eclipses. The gaping mouth in his belly symbolizes his swallowing-up of the two heavenly bodies.

Esoterically, with his believed links extending into the depths of the cosmos, Rahula is traditionally invoked to avert negative astrological circumstances.