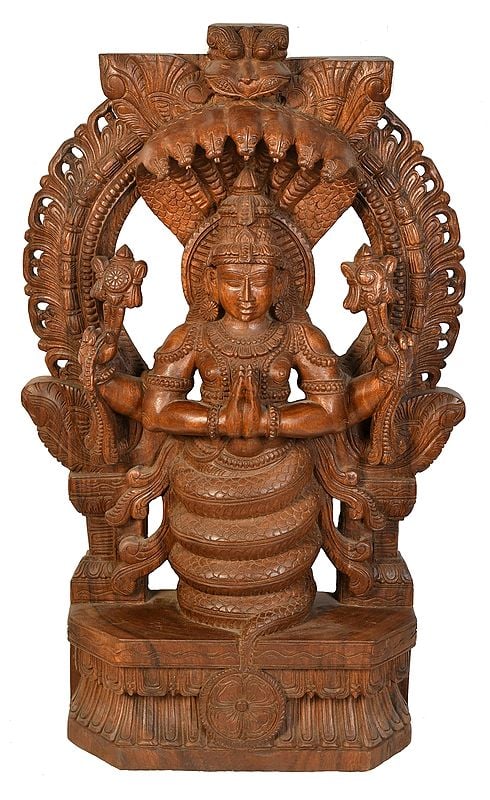 $1100.00
This item can be backordered
Time required to recreate this artwork
20 to 24 weeks
Advance to be paid now
$220.00 (20%)
Balance to be paid once product is ready
$880.00
Notify me when this item is available
Save to Wishlist Send as E-card Share by Email
This magnificent wood-statue, carved with minute details and rare skill, represents sage Patanjali, a thinker/grammarian/exponent of a new system of Yoga, broadly one who stood on par with those with divine birth so much so that he was believed to have incarnated the Great Serpent Shesh. Textual tradition venerates him with many names and epithets, such as Gonardiya, Gonikaputra, Naganatha, Ahipati, Phanibhrata, Phanipati, Padakara, Shesh, Vasuki and many more. Except Gonardiya, suggestive of one born at Gonarda, his birth-place, and Gonikaputra, born of Gonika, his mother, his all other names link him with the Great Serpent Shesh. Bhavishya Purana contends that Vishnu had himself endowed him with a part of his Maya and thus with godhood.

Some scholars have identified Gonarda province, Patanjali was born at, as Gonda district of Uttar Pradesh. However, some other scholars to include Kalhana, the eleventh century great scholar and the writer of Rajatarangini, quotes Gonarda as the name of a ruling dynasty of which three kings ruled Kashmir and contend that Gonardiya was suggestive of the country that they ruled. Thus, contentions in regards to Patanjali’s birth-place keep swinging from Uttar Pradesh to Kashmir. As regards his status, he was one of the four most venerated scholar-saints during the period from five hundred B.C. to two hundred B.C., the other three being Panini, Vyadi and Katyayana. Panini preceded other three by about two to three hundred years. Patanjali lived sometime in between 300 to 200 B.C.

Patanjali was initially Vaishnava but after he was defeated by Katyayana of Varanasi in intellectual discourse he resorted to Devi’s cult too and was soon its master and with his dual knowledge he established his supremacy over Katyayana. His innovative system of Yoga apart, Patanjali’s most significant contribution is his commentary on Panini’s Ashtadhyayi, a book on grammar containing eight parts, each divided further into four sections making their number thirty-two. Patanjali deleted what was irrelevant and added what was missing and thus he completely revised Ashtadhyayi, even its format, dividing its total contents in eighty-four parts, each to be covered in one lecture. It was he who deified Panini as ‘bhagawana’ – god, though subsequently Patanjali was himself deified and not only his icons were made but also installed in shrines and were worshipped believing that his worship multiplied the power of intellect and reasoning.

In the wood-statue, an accomplished artifact with ‘padma-pitha’ – lotus base, and ‘prabhavali’ – fire-arch, consisting of three elaborate rings and topped by an impressive ‘kirtti-mukha’, Patanjali’s figure is seen emerging from the coiled body of a huge serpent, obviously the Great Serpent Shesh whom he incarnates. This style of portraying the ‘incarnated’ and the ‘incarnating’ is novel and direct. As in the iconography of Vishnu, the Great Serpent’s hood composed of seven mouths unfurls over Patanjali’s figure, a canopy-like attributing it regal status. A Vishnu’s humble devotee he has his normal two hands folded in devotion. However, he has not been carved with mere two normal arms but with Vishnu-like four, carrying in the upper two, disc and conch – the attributes of Vishnu. He has on his forehead, a Vaishnava tilaka – auspicious mark, on his ears, Vaishnava ‘kundalas’ – ear-ornaments, and on his head a towering Vaishnava crown, all suggesting that he shares his being with Lord Vishnu and is thus his part. This visually illustrates the Puranic proposition that Vishnu had endowed Patanjali with his Maya.