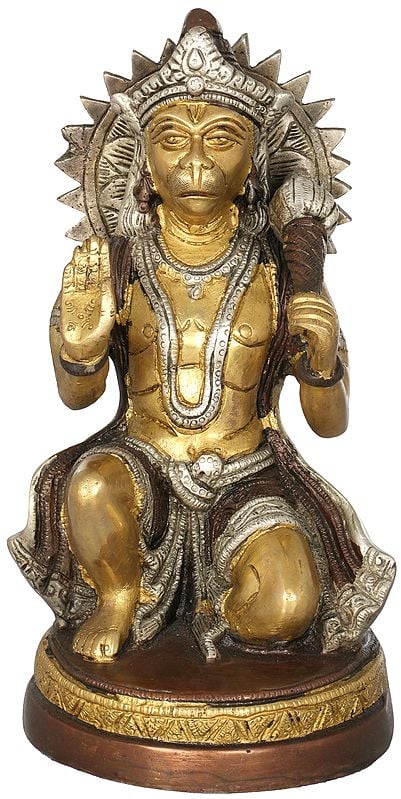 Whenever one thinks of the devotees dearest to Lord Rama, the first name that comes to the mind is none other than Lord Hanuman, who is in the form of a monkey. Here's a sharp and metallic illustration of the Pavan Putra (son of the Wind God). This form symbolizes us the Viramudra (courageous position) of the dynamic Hanuman Ji. In his usual sedentary posture, we can have a view of the Abhaya Mudra through the right hand which indicates his shower of mercy on us. He holds a winsome Gada in his left hand which is his all time weapon for evils and a merciful implement for the devotees.

With an eye-catching aureole behind his head which has crisscross cuts along with an attractive crown placed on his head. The craft displays the mighty body of mighty lord along with a stunning costume adorned by him; the sacred Vaishnava Tilak on his forehead and holy patterns on the hand add an identity of him as a great devotee of Bhagavan Rama. He has a get up of lavish set of necklaces and jewels over his wide chest, ravishing earings in the wide ears and stunning bangles in both the hands.