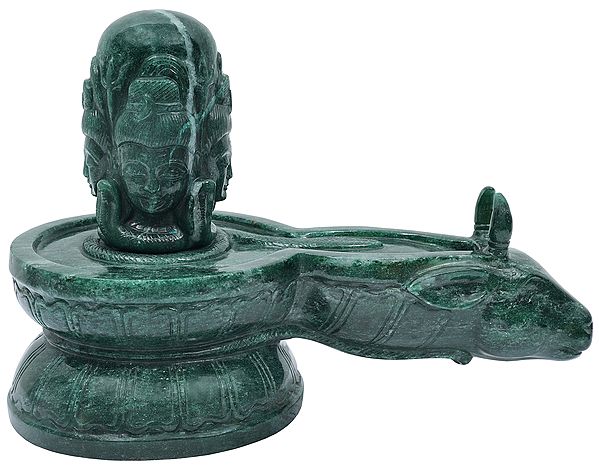 When creation began to happen, the first ’form’ that it took was that of a Linga, hence ‘linga’ means ‘the form’. Mukhalinga, as the name says, means linga with a face; carved here in the visible four faces in all four cardinal directions and the fifth, invisible one, faces upwards emerging from the top of the shaft. A pancha-mukhalinga (linga with five faces of Shiva) represents Shiva’s five aspects- Mahadeva (east face), Uma (north face-face of Parvati), fire (south face), Nandi (west face) and Sadashiva (top face) and this icon of these five aspects represents the entire universe. This jade aventurine carved Mukhalinga is a visible form of the mantra ‘namaha Shivaya’, where the five syllables of this mantra embody the five elements- air, water, fire, ether and earth.

Apart from it being carved as Mukhalinga, the two most enticing features of this sculpture are the green glossy carving in jade aventurine and the yoni formed with the face of Nandi (Shiva’s consort). Each of the faces carved on the linga is depicted with a serpent coiled around Shiva’s neck, crescent moon adorned on the matted hair locks and Ganga flowing out form it along with a trident symbol in-between every face. Jade aventurine is identified by granting people with good luck, health and abundance which complies with Lingam’s worship of being known as an emblem of existence symbolic of the union of mind and soul.

One may note that a Mukhalinga is composed of three parts- Brahma Bhaga (bhoomi- the lowest part of the linga), Vishnu Bhaga (peetham- middle section), carved here in the form of a lotus pedestal and Shiva Bhaga (pooja bhagam- topmost part of the shaft with a rounded top), carved here with the visible four faces on it, thus exemplifying the supremacy of Shiva over Brahma and Vishnu. This transcendental reality of Shiva depicts him in a serene, calm and majestic form, also symbolizing the union of Shiva and Parvati (yoni), thus resulting in aspects of creation and destruction.