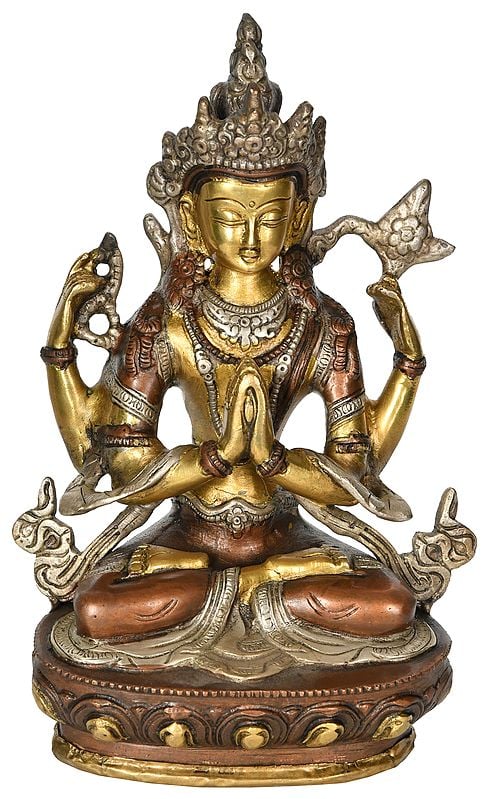 $145
Quantity
Notify me when this item is available

Free delivery
This sculpture is that of the Buddhist deity Shadakshari Lokeshvara, one of the many forms of Bodhisattva Avalokiteshvara. In this manifestation he is considered the embodiment of the mystic mantra of six syllables, Om Mani Padme Hum, hence the prefix Shadakshari (six-syllabled).

He is seated in the vajraparyankasana on a lotus throne. He has four hands; upper right hand holds a rosary (akshamata) a sign that he draws forth beings from phenomenal existence. His left hand holds a stem of a lotus-flower a symbol that he serves living beings but is free from attachment. The principal hands make the gesture of adoration (anjalimudra) in front of the heart and in these hands he is holding a jewel.

His hair is partly upswept in knots partly falls on his shoulders. A seated image of Dhyani-Buddha Amitabha has been depicted on the matted crest.

The body of the deity is slim and slender. His eyes are half-closed and are looking inwards in meditation. He has a smiling countenance, as he is filled with compassion for all beings. There is a sacred circle of knowledge (urna) between the eyebrows. He is adorned with bejeweled ornaments signifying that while pure he has not abandoned pleasant things.

The upper garment of the Bodhisattva covers both the shoulders and the lower one covers the body upto the feet. The borders of the garments are incised with floral designs. He is also wearing a scarf. Moreover, the Bodhisattva is adorned with a five-crested crown and jewel ornaments: ear-rings, necklaces, sacred-thread, waist-band, armlets and bracelets.

In addition to Tibet and Nepal, the deity is also extremely popular in Korea, Japan and China.

This description by Dr. Shailendra Kumar Verma, Ph.D. His doctorate thesis being on the "Emergence and Evolution of the Buddha Image (from its inception to 8th century A.D)"

P. Pal, Art of the Himalayas: Treasures from Nepal and Tibet, New York, 1991.