26 November 2008. The world watches in horror as Mumbai is ripped apart by coordinate terrorist attacks. Among the locations targeted is the century-old iconic Taj Mahal Palace and Hotel in Colaba. By the time the siege ends, the hotel has suffered severe damage—and dozens have lost their lives. In 14 hours, we encounter for that first time a full, eyewitness account of the shocking tragedy—from Ankur Chawla, an operations management trainee with the hotel in 2008. A stark and compelling narrative, this is the story of a man who battled immense fear and peril to emerge a survivor.

ANKUR CHAWLA went to school in Delhi and then graduated from the Institute of Hotel Management trainee with the Taj Group of Hotels. He has worked at different Taj properties, including the Taj Mahal Palace and Hotel in Mumbai, for almost five years. Ankur has, over the years, also played musical instruments such as the table and drums, participated in theatre, acted in documentaries and engaged in several public-speaking and marketing engagements. He currently holds a managerial position in the food and beverage department at the Taj Mahal Hotel in Delhi.

The 105-year-old Taj Mahal Palace and Hotel is the epitome of opulence, luxury, exuberance and dedicated service for the Indian hospitality sector. What Shah Jahans Taj Mahal is to monuments, the Taj Mahal Palace is to hospitality in India. I don't want to run through the cliches where I say that I am a normal Delhiite, a guy-next-door sort, that I hated studies since kindergarten, that I was desperate to find a girlfriend, had a badly screwed-up life, etc.; let's get directly to where my shattering, frightening, life-altering experience began. The longest night ever, for me and some hundreds of people across Mumbai, India and even overseas. The most significant milestone of my life's journey, as many would call it.

As a kid, I had two dreams: to either be an actor or an entrepreneur. I was fascinated by the fact that 'introductions' were not meant for actors; any party became successful if they were there, flashing their style statements for the benefit of Page Three, and the icing on the cake was that they were paid well. One couldn't ask for more. Nursing this ambition, I sat for only two entrance exams after school, when my friends were attempting between five to seven, thinking that at least one would click. I sat for a Bachelor's in mass communication entrance exam and the other was, of course, hotel management. However, I was inclined towards the former, reserving the latter as plan B.

On the day of the hotel management exam, I called up Manish (my mentor for the entrance exams) and said, 'Sir, I am sure that I will clear the mass communication exam next month. I don't feel like appearing for this one. What do you think?' After his refusal to back my decision, I felt I had to sit for the exam. I wasn't aware then that this exam would lead to the most interesting twist in my life.

After wasting three years of my life at the Institute of Hotel Management in Shimla, it was a euphoric moment for me when I came to know that, out of the two hundred-odd students of my batch, I was the only one to get placed as an operations management trainee with food and beverage at the Taj Group of Hotels. Finally, a feeling of not being so wasted after all grew inside me. Every single day became a party until I went to Aurangabad for my classroom training sessions.

After a month of fun and making new lifelong friends and a few classroom sessions, I was chosen as a member of the inaugural team for a new Taj property opening in Trivandrum. This came as a shock to me--I had lived so far on butter chicken but was now being offered a South Indian thali. I was one of those who prefer to die from hunger rather than digest a dosa with sambhar. I just didn't want to go to down south. I read the appointment letter thrice just to make sure that I was not hallucinating.

I almost lost all my hopes with the company and started talking to people from other hotels. But before I could put in my papers as I had decided, Rubal, my classroom trainer, called me. He congratulated me and said, 'Destination Mumbai for you, dude: He flooded me with a lot of gyan, making sure that my shoulders started feeling the weight of my destiny. I was to be at the famous Taj Mahal Palace at Apollo Bunder!

The thought of savouring vada paav (if not butter chicken) while looking at beautiful girls on Juhu beach made me accept the offer without a second thought. Besides, Mumbai was much closer to Delhi, my home. It looked like the perfect choice for living a perfect life-and maybe getting a perfect girlfriend. And I was excited about the whole thing not only because I had been blessed with a position at the best hotel in the country but also because it was the city of the love of my life- Bollywood.

With crossed fingers and hope in my heart, I sniffed the (not very) fresh air of Mumbai on 14 July 2008. I realized the next week that finding accommodation in Mumbai was more difficult than searching for the Almighty.

On my first day at work, my roommate and I got out of the taxi at the lane behind the hotel. He started moving ahead towards the staff gate while I stood still for a couple of seconds, staring at the walls, relishing the sight of every brick of the hotel. There was something about it which gave me a sense of deja vu as I walked through the back doors to the learning and development department. I was ecstatic that I was joining the Taj--a prominent landmark for the upwardly mobile. Its grandeur was inspiring.

We were a group of twelve people in the training room. A movie, Keepers of the Flame by Zafar Hai, was screened for us. The title was familiar from a couple of albums and a 1942 movie which shared the same title, though I was sure this was not the same one. It was about the history of the Tatas, starting with the family tree and following the journey of the first ever 5-star luxury hotels in India. It was inspiring to watch, how a normal guy with great vision just kept on expanding his business while simultaneously keeping his values stronger then steel. It was a film that did not let us lose interest for even a second. As the movie ended, a tall, charming lady entered the room and introduced herself as Jennifer Green. 'Welcome aboard, guys. I am here for your induction: She spoke in a soft tone and with a plastic smile as if she was not happy with us coming in or had loads of other work.

Without wasting much time on introductions, she initiated a discussion on the hospitality sector in India, and a history of the Taj group. She told us about the progress of the sector and went on and on and on, spending a good amount of time on a variety of topics. It seemed as if she had been under a lip-binding curse which was broken the moment she saw us. Her extended lecture completely shook up our expectations. No rosy stuff, only practical things which were more or less contrary to what we had thought. She made us feel different and, unfortunately, worse. The partying days are over, dude, I said to myself.

I was just thinking of turning around to see what the others were doing to cope with this excruciating disillusionment, when the guy behind me murmured, 'All that glitters is not gold: Ms Jenny (that's what we had christened her, seconds after she told us her name), who apparently heard that, gave the poor guy a look so stern that we didn't dare make a sound during the rest of the session. I wondered if she was offended merely at being interrupted, or whether it was the remark itself.

Ms Jenny took us on a tour of the big property, during which she continued her lecture. Nobody knew if she was saying anything productive as we were too busy marvelling at the wonder that is the Taj Mahal Palace. We went through different areas and departments like housekeeping (linen room, laundry), human resources (for formalities), the main kitchen, all food and beverage outlets (restaurants, bars, banquet halls, etc.), as well as the back areas, the swimming pool and gymnasium.

I didn't realize then that this property tour would be so useful in saving lives-mine and others' -one day ...

The session ended with a discussion of the history of the property, and the myths associated with it. Someone mentioned that it had been built in a way opposite to how it should have been-the front was supposed to be the back and vice versa. Others mentioned that the architect committed suicide.

All I was sure of was that a new chapter had started in my life and I was going to explore it further. Just how much further was yet to be known. 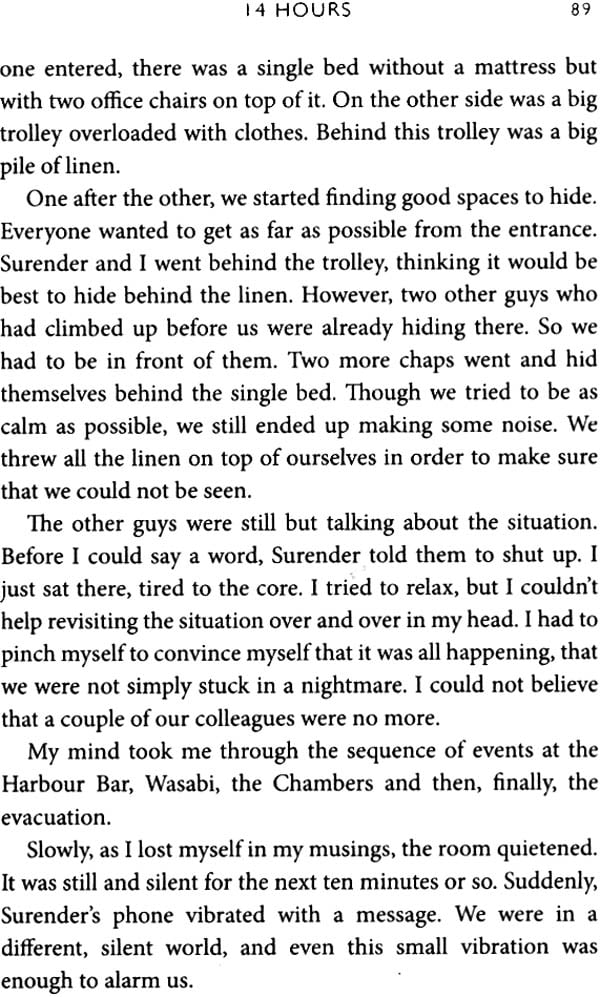 The Prophet of Peace (Teachings of the Prophet Muhammad)
By Maulana Wahiduddin Khan
$24.50
FREE Delivery The Naxalites and Their Ideology
By Rabindra Ray
$29
FREE Delivery