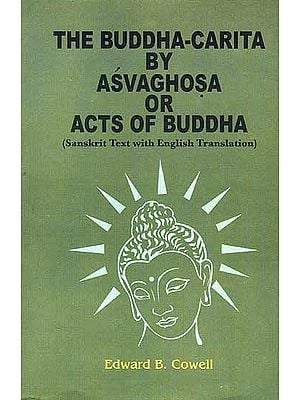 The Buddha-Carita will tell us little new about Buddhism and its history, but it is full of information for those who are interested in the history of Sanskrit literature; and I am sure that other and younger eyes than mine will bring many points of interest to light which I have failed to see, as I was too much engrossed with minute varieties of reading and difficulties of interpretation to have always had leisure or insight for these larger questions. After all, I have been obliged to leave many passages, which are obscure from some undetected corruption in the text. The inaccuracy of the Nepalese MSS. Must be my plea, as I submit this editio prima of the Buddha-carita to the Criticism of Sanskrit scholars.

The Sanskrit text of the Buddha-Carita was published at the beginning of last year in the 'Anecdota Oxoniensia,' and the following English translation is now included in the series of 'Sacred Books of the East. It is an early Sanskrit poem written in India on the legendary history of Buddha, and therefore contains much that is of interest for the history of Buddhism, beside its special importance as illustrating the early history of classical Sanskrit literature.

It is ascribed to Asvaghosa and although there were several writers who bore that name, it seems most probable that our author was the contemporary and spiritual adviser of Kanishka in the first century of our era. Hiouen Thsang, who left India, in A.D. 645, mentions him with Deva, Nagarjuna, and Kumaralabdha, as the four suns which illumine the world; but our fullest account is given by Itsing, who visited India in 673. He states that Asvaghosa was an ancient author who composed the Alankara sastra and the Buddha-Carita-Kavya,-the latter work being of course the present poem. Beside these two works he also composed the hymns in honour of Buddha and the three holy beings Amitabha, Avalokitesvara, and Mahasthana, which were chanted at the evening service of the monasteries. In the five countries of India and in the countries of the Southern ocean they recite these poems, because they express a store of ideas and meaning in a few words. A solitary stanza (VIII, 13) is quoted from the Buddha-Carita in Rayamukuta's commentary on the Amarakosa I, 1. 1,2 and also by Ujjvaladatta in his commentary on the Unadi-sutras I, 156; and five stanzas are quoted as from Asvaghosa in Vallabhadeva's Subhasitavali, which bear a great resemblance to his style, though they are not found in the extant portion of this poem.

The Buddha-Carita was translated into Chinese by Dharmaraksha in the fifthe century, and a translation of this was published by the Rev. S. Beal in the present series; it was also translated into Tibetan in the seventh or eighth century. The Tibetan as well as the Chinese version consists of twenty-eight chapters, and carries down the life of Buddha to his entrance into Nirvana and the subsequent division of the sacred relics. The Tibetan version appears to be much closer to the original Sanskrit than the Chinese; in fact from its verbal accuracy we can often reproduce the exact words of the original, since certain Sanskrit words are always represented by the same Tibetan equivalents, as for instance the prepositions prefixed to verbal roots. I may here express an earnest hope that we may still ere long have an edition can be found to complete Dr. Wenzel's unfinished labour. He had devoted much time and thought to the work; I consulted him in several of my difficulties, and it is from him that I derived all my information about the Tibetan renderings. This Tibetan version promises to be of great help in restoring the many corrupt readings which still remain in our faulty Nepalese MSS.

Only thirteen books of the Sanskrit poem claim to be Asvaghosa's composition; the last four books are an attempt by a modern Nepalese author to supply the loss of the original. He tells us this honestly in the colophon,- having searched for them everywhere and not found them, four cantos have been made by me, Amrtananda- the fourteenth, fifteenth, sixteenth and seventeenth. He adds the date 950 of the Nepalese era, corresponding to 1830 A.D., and we have no difficulty in identifying the author. Rajendralal Mitra in his 'Nepalese Buddhist Literature' mentions Amrtananda as the author of two Sanskrit treatises and one in Newari, he was probably the father of the old Pandit of the Residency at Kathamandu, Gunananda, whose son Indrananda holds the office at present. Dr. D. Wright informs me that the family seems to have been the recognized historians of the country, and keepers of the MS. Treasures of sundry temples. The four books are included in this translation as an interesting literary curiosity. The first portion of the fourteenth book agrees partly with the Tibetan and Chinese and Amrtananda may have had access to some imperfect copy of this portion of the original; but after that his account is quite independent, and has no relation to the two versions.

In my preface to the edition I have tried to show that Asvaghosa's poem appears to have exercised an important influence on the succeeding poets of the classical period in India. When we compare the description in the seventh book of the Raghubamsa of the ladies of the city crowding to see prince Aja as he passes by from the Svayamvara where the princess Bhojya has chosen him as her husband, with the episode in the third book of the Buddha-Carita (slokas 13-24), or the description of Kama's assault on Siva in the Kumarasambhava with that of Mara's temptation of Buddha in the thirteenth book, we can hardly fail to trace some connection. There is a similar resemblance between the description in the fifth book of the Ramayana, where the monkey Hanumat enters Ravana's palace by night and sees his wives asleep in the seraglio and their various unconscious attitudes and the description in the fifth book of the present poem where Buddha on the night of his leaving his home for ever sees the same unconscious sight in his own palace. Nor may we forget that in the Ramayana the description is merely introduced as an ornamental episode; in the Buddhist poem it is an essential element in the story, as it supplies the final impulse, which stirs the Bodhisattva to make his escape from the world. These different descriptions became afterwards commonplaces in Sanskrit poetry, like the catalogue of the ships in Greek or Roman epics; but they may very well have originated in connection with definite incidents in the Buddhist sacred legend.

The Sanskrit MSS. Of Nepal are always negligently transcribed and abound with corrupt passages, which it is often very difficult to detect and restore. My printed text leaves many obscure lines which will have to be cleared up hereafter by more skilful emendations. I have given in the notes to the translation some further emendations oy own, and I have also added several happy conjectures which continental scholars have kindly suggested to me by letter; and I gladly take this opportunity of adding in a foot-note some which I received too late to insert in their proper places.

I have endeavoured to make my translation intelligible to the English reader, but many of the verses in the original are very obscure. Asvaghosa employs all the resources of Hindu rhetoric (as we might well expect if I-tsing is right in ascribing to him an 'alankara-sastra') and it is often difficult to follow his subtil turns of thought and remote allusions; but many passages no doubt owe their present obscurity to undetected mistakes in the text of our MSS. In the absence of any commentary (except so far as the diffuse Chinese translation and occasional reference to the Tibetan have supplied the want) I have been necessarily left to my own resources, and I cannot fail to have sometimes missed my author's meaning,

But I have tried to do my best, and no one will welcome more cordially any light which others may throw on the passages which I have misunderstood.

The edition of the original text was dedicated to my old friend Professor F. Max Muller, and it is a sincere gratification to me that this translation will appear in the same volume with similar translations from his pen.

The Karmapa Prophecies
By Sylvia Wong
$53
Out of Stock 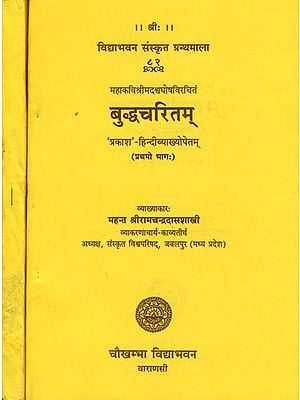 The History and Literature of Buddhism
By T.W. Rhys Davids
$19

Buddhist Wisdom: The Mystery of the Self
By George Grimm
$24
FREE Delivery

The Jatakas (Times and Lives of Bodhisattva)
By Alexandra R. Kapur-Fic
$46
FREE Delivery