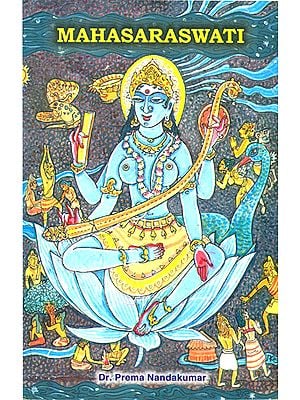 Dr. Prema Nandakumar (M.A.,1958; Ph. D., 1961) had a first class academic career in Andhra University. She is a close student of classical and modern Tamil literature, and her translation Bharati’s poems has been sponsored by UNESCO and Sahitya Akademi. She has published short biographies of Sri Aurobindo, the Mother and Bharati. She has contribution numerous critical papers to journals and scholarly publications, and 26 of her writings on Indian, English. American and Commonwealth Literature have been collected in The Glory and the Good. She has commendation for her translation of the ancient Tamil epic. Manimekalal, into into English, Among her other significant translation is Viduthalai, a Tamil rendering of chaman Nahal’s Sahitya Akademi Award-winning novel, Azadi.

Dr. Prema Nandakumar’s critical studies include Sri Aurobindo’s Savitrl: A Study; T.V kapali Sastri; and kulothungan: A Post of Today and Tomorrow. Her English commentary on Andal’s Tiruppavai has been welcomed by scholars for adhering closely to traditional commentaries while bringing in fresh insights from contemporary writings. A writer of fiction in Tamil and English, one of her collections of Tamil short stories, Amuda Thuli Uthirndadu, received the first prize awarded by Tamil Nadu Government in 1983. Her Atom and the Serpent, a Novel of Campus Life in India Today, has been hailed as a ‘blisteringly honest novel’. During the last forty years, the Aurobindonian inspiration has led her to read, write and speak on the glories of Indian culture with a commendable sense of balance and an undeniable strength of purpose in India and abroad.

Dr. Prema Nandakumar’s Mahasaraswati is like a South Indian piece of jewellery. Richly studded, compact and tightly structured. Each chapter is a separate gem, bright, shining with its special history; together they form an exquisite design of a ‘whole’, precious, illuminating and elevating.

Saraswati, the river, lies embedded in the sands of time: she is antahasalila and antarvahini. Whether archaeologist will uncover her physical presence or not, she is ever present in the Indian psyche, renewed ceremonially each year in specific season in countless ways in different regions and milieu, in narrative, incantation, domestic and public ritual, music, dance and festivals. Prema Nandakumar takes us through this multidimensional journey with a lucidity of expression, profundity of thought and depth of commitment. Appropriately she begins by reminding her readers of the association of Saraswati with one of the seven rivers that at one time flowed through ancient India. The very word Saraswati, as is well known, is derived from saras+vatup+nis denotes a river with flowing waters (saras) and thus ever affluent. The concept and deity likewise is every flowing and dynamic. Apart from other epithets, very early in theRg Veda she is described as chodayitri sunrutanam (R.V.1.3.10) or sunrtanam, i.e, the inspirer of ideas in the mind and intellect. She is also the giver of intelligence ‘Sarasvati-sadheyanti dhiyam (R.V.II 3.8) she is also accumulated knowledge “maho arnah..”.(R.V.1.3.12). Nandakumar draws our attention to this vision and the illuminating interpretation of Sri Aurobindo. For him these invocations to Saraswati signify “that power of the Truth which we call inspiration”. She elucidates with great sensitivity on the Saraswati Suktam of the RgVeda as also other references in the Yajur and Atharvaveda, as mother, granter of ananda (bliss).

Understandably all these attributes of knowledge, truth, every flowing and effulgent lead to identification of Saraswati with Vak the primordial word and speech. The Atharva Veda opens with the most evocative verses on Vak speech; the RgVeda devotes a powerful hymn to Vak. In the Devi Suktam the word is the life giving principle within all beings.

Saraswati river transformed to goddess, identified with work and speech as Vak, enters the universe of India myth and legend. Now many myths are woven around her. Each narrative, be it of Dadhichi or Saraswati or other which speak of the several ashrams along her banks, are reminders of the power of knowledge to generate creativity and intellectual discourse. With a light touch Prema Nandakumar rearticulates some of these through the epics, specially Mahabharata. These are precursors to the status of Brahma’s consort and finally of the great Devi in the Puranas. Naturally the concept of Saraswati as a symbol of ‘knowledge’ is not restricted to the vedic, epic and puranic stream. It is equally central to Jainism and Buddhism. In the former she is Vaghdevi, Vagisvari (Goddess of speech); in the latter the supreme prajna (wisdom) concretised in her many forms. In a miniscule form Prema gives glimpses of this rich literature from Tamil and Pali sources to reinforce her central concern with Saraswati as the lamp of knowledge and wisdom.

As was to be expected, the concept, the narratives, the myths are concretised in iconic form. In these icons many complex stories and narratives and abstract ideas are condensed as a capsule in figurative form. The iconography of Saraswati alludes to the ‘myths’ and the ‘myths’ and the legends, the images also becomes a coordinate of the mantra and the bhavana. Temples are the abode of these icons. Even if few temples are exclusively dedicated to Saraswati, there is a vast corpus of sculptural reliefs of the image of Saraswati. The subject is vast and many art historians have focused attention on the early and later and later images of Saraswati. They span a long history from the earliest Kushan images to the Rashtrakutic to Pala, Hoysala, Chola and Vijayanagar, the Pratiharas and the Paremaras. With acute selectivity Prema Nandkumar concentrates on a few panels in the temples of temples of Tamilanadu specially Gangaikondacholapuram and Siru Karumbur, as also the unusual temple of Koothanur dedicated to Saraswati. Welcome and moving is the author’s account of the Sarada Devi temple in Maihar, Madhya Pradesh, where Ustad Allaudin Khan used to go daily. In fact he carried an image of the deity on his person and I recall seeing it pinned on his kurta. Saraswati is the ishta devi of all musicians and dancers throughout India. She is herself an embodiment of the arts, specially music and dance. These are offered to her as part of the seva in the Shodasa Upachara. Poets and writers of modern India have been inspired by Saraswati. Bankim, Rabindranath, Subramania Bharati, Suryakant Tripathi, Nirala and many others. Prema Nandakumar recounts this, each time taking us back to the depth of meaning and significance of Sri Aurobindio’s perceptions, insights and interpretations. Each poet bring a new sensibility. The Goddess represents knowledge and the revelation of truth, but she also becomes the symbol of national aspirations and she is the mascot of the journey to freedom from bondage of ideology or narrow dogma.

It was 1950. I was a little girl them and it was Navaratri time. A hawker of clay dolls came to our porch in Visakhapatnam. My mother bought a Saraswati for annas and gave the image to me. “Pray to her and you will get good education”. I gazed and gazed at the innocent-looking Saraswati standing with a veena in her hand, near a swan. The love and reverence for Saraswati instilled in me at that moment by my mother has remained with me today. The image has also presided my work-table for more than half a century, wherever I have had to go and make a home.

The first realization regarding Saraswati came to me when I found myself weak in mathematics. Merely praying for her grace was not enough. One had to work hard to get good results, I was told, but she was always there me success, if was sincere in my efforts. As grew up and journeyed into the worlds of Subramania Bharati and Sri Aurobindo, Saraswati became an experience of joy and peace. Bharati took me beyond the beyond the ritulism of Saraswati Puja that I celebrated at home during the Ninth night of Navarthri. Sri Aurobindo transformed my attitude as a homemaker with his great little book, The Mother and what he wrote about Mahasaraswati in a letter dated 1st June, 1933, calling her the Yoga that is skill in works, yogah karmasu kausalam: 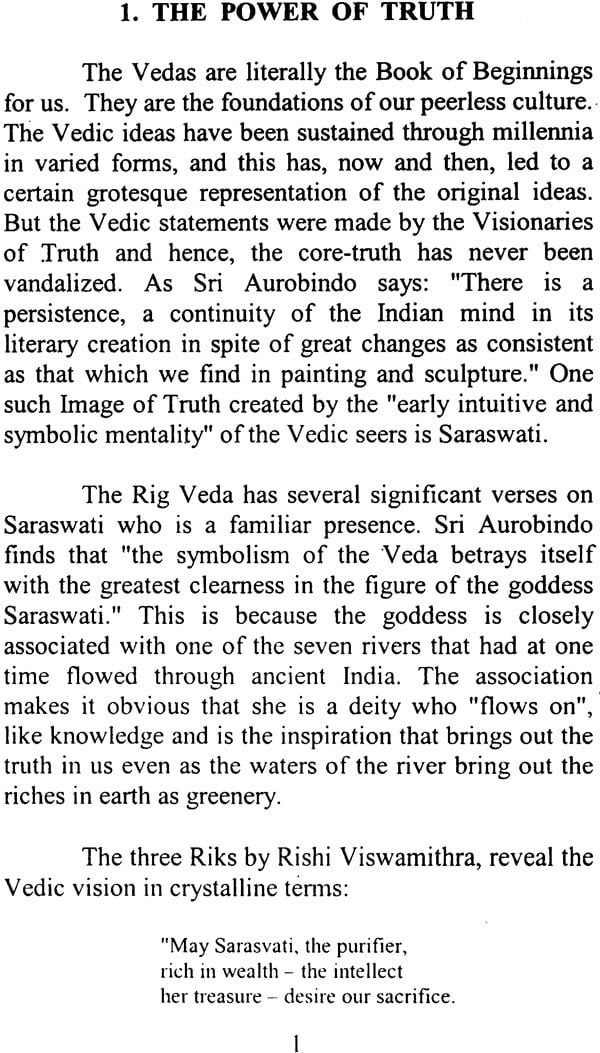 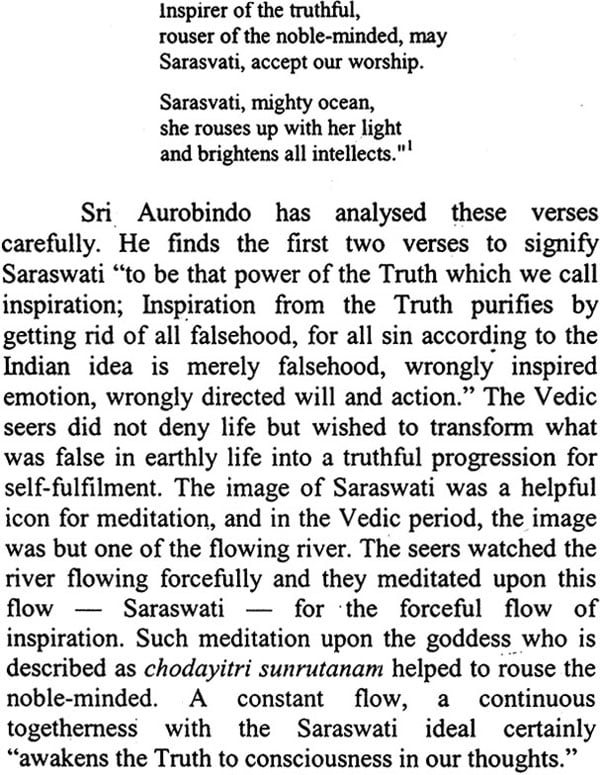 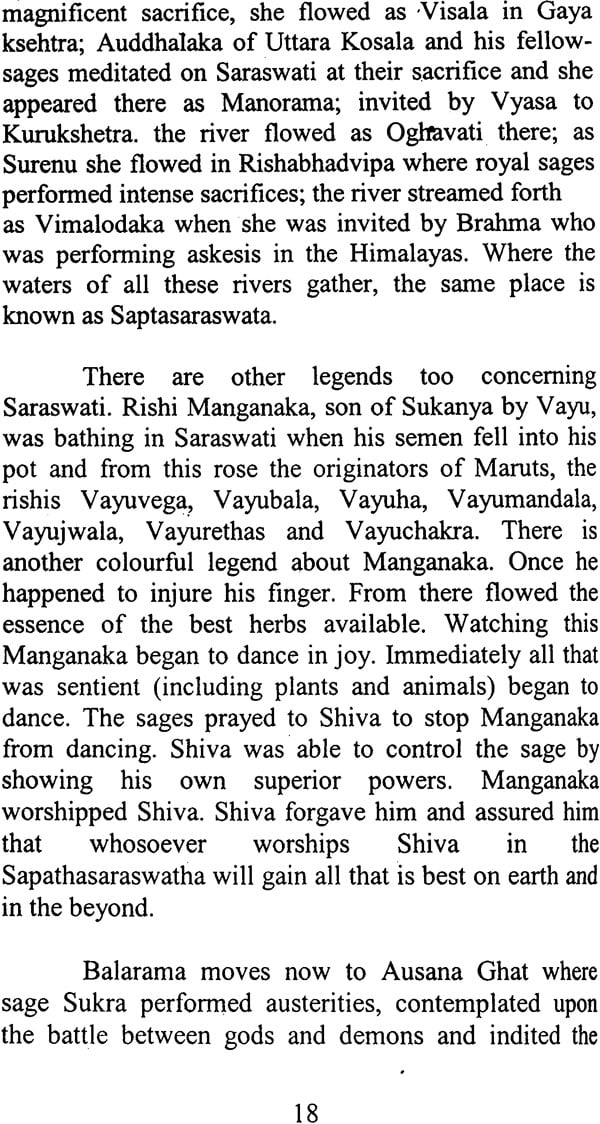 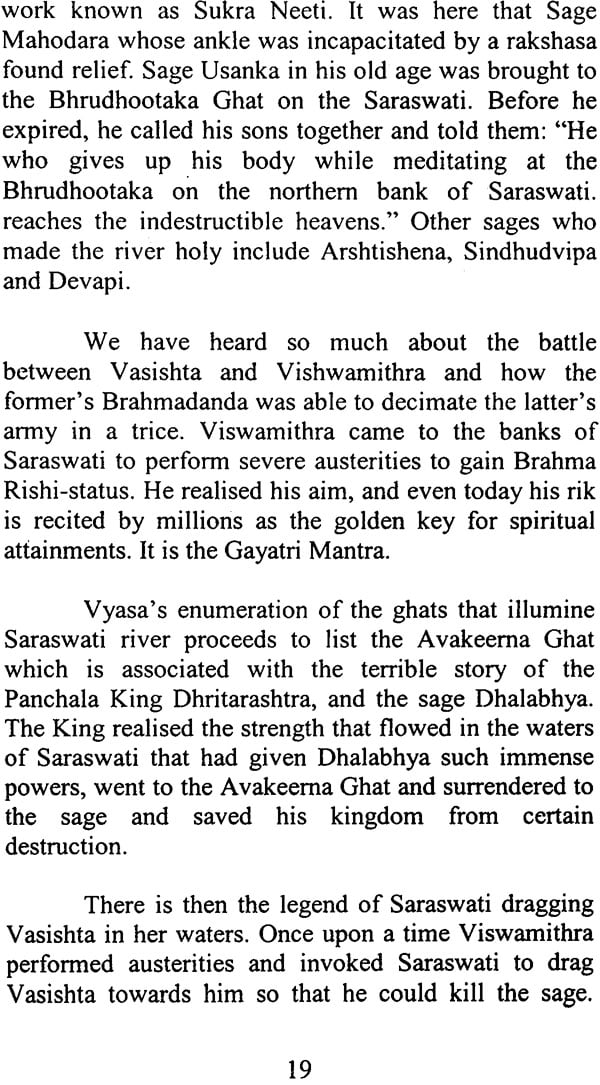 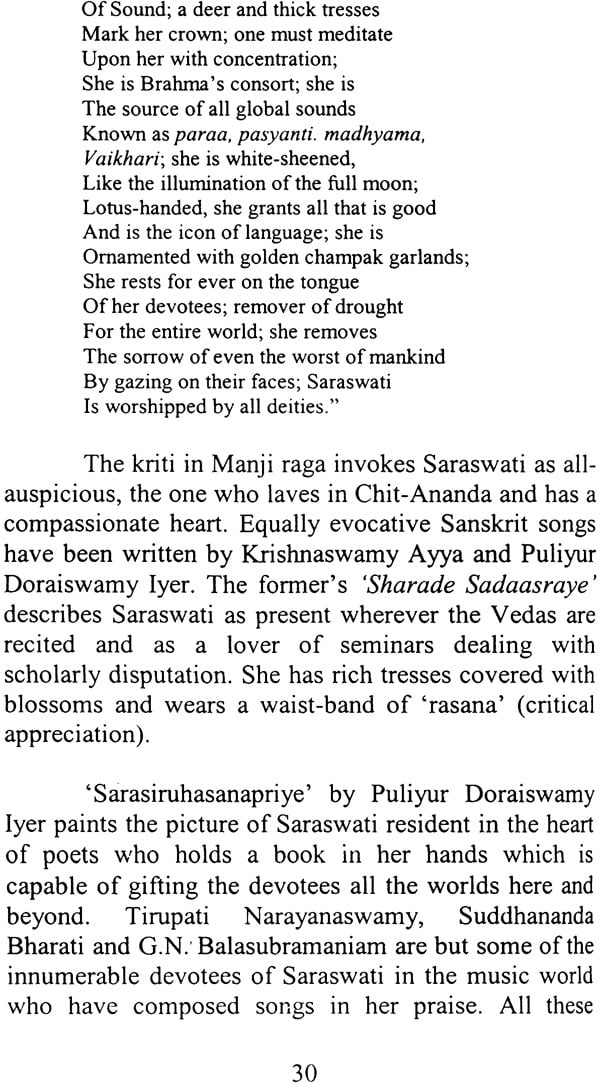 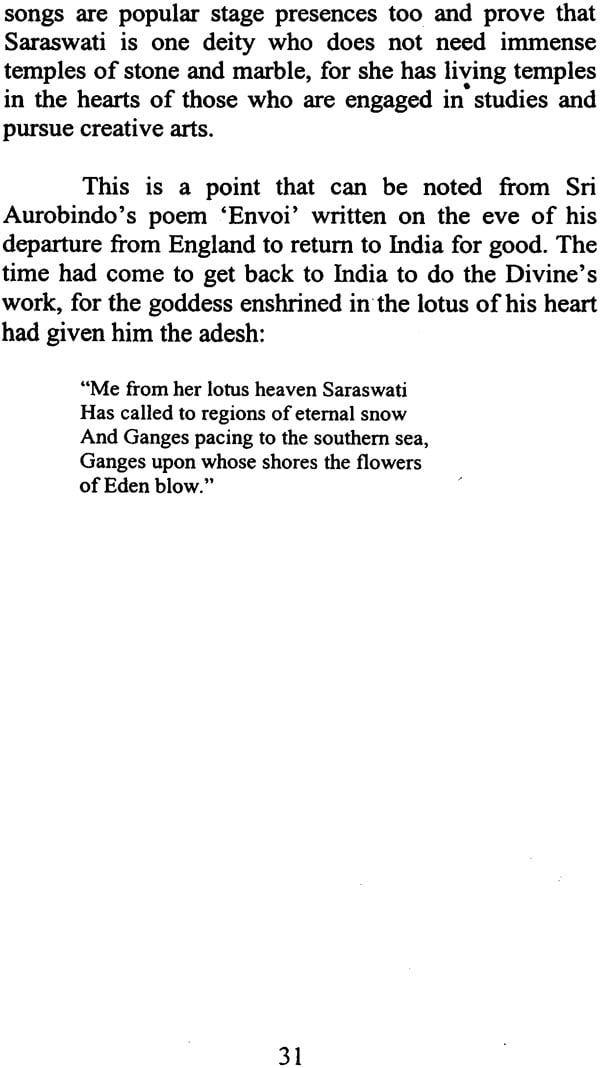 The Lost River: On the Trail of the Sarasvati (Saraswati)
By Michel Danino
$39
FREE Delivery 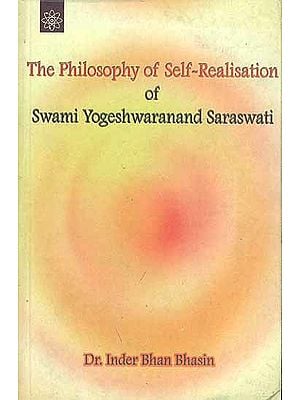 The Philosophy of Self Realisation of Swami Yogeshwaranand Saraswati
By Dr. Inder Bhan Bhasin
$31
FREE Delivery 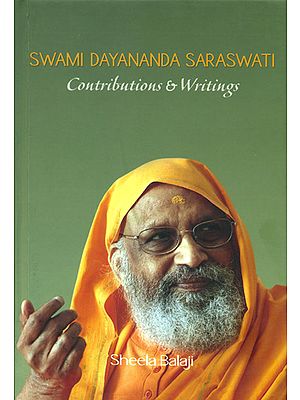 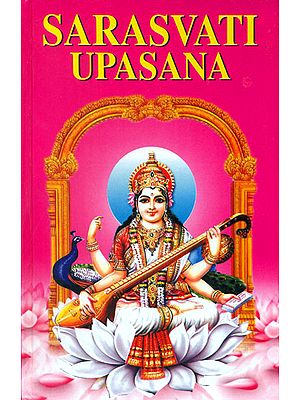 Maa Saraswati: Story of the Kind Goddess who blesses her devotees with Name, Fame and Wisdom
By Dr. MahendraMittal
$14
Best Seller 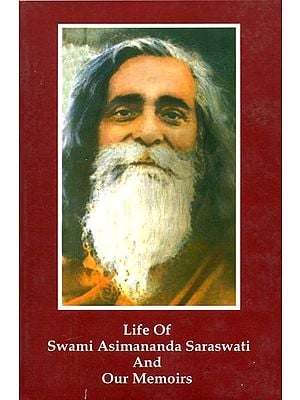 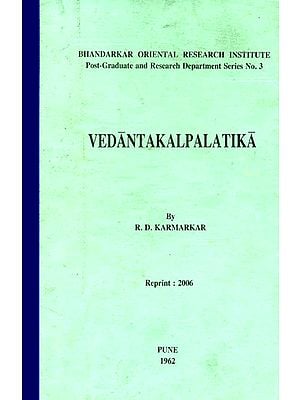