Manimekalai (An Old and Rare Book) 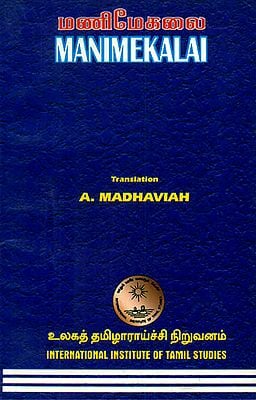 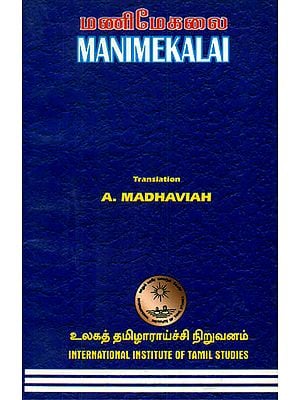 Manimekalai (An Old and Rare Book)

$21.00
FREE Delivery
Quantity
Ships in 1-3 days
Notify me when this item is available
Post a Query
Foreword

As a writer, both in English and Tamil, Mr. Madhaviah needs no introduction. Readable version of the great classics of Tamil Literature have long been a desideratum, and all efforts to remove of want are worthy of commendation. Among the great classics of Tamil Manimekalai deservedly occupies a high place, judgment as Sivaprakasa Swamigal. Silappadhikaram and Manimekalai constitute a twin epic and ought to go together. The authors were friends, and the stories run one into other. The princely author of the first belonged to the royal house of Vanji, the Chera capiytal on the West Coast. His friends, the author of the second, was a corn merchant of Madura, the critic par excellence of the "Third Sangam". Though tradition does not is so many words declare that these works went before the Sangam and received its imprimatur, Tamil scholarship is unanimous in regarding these as "Sangam Works", properly so called. Notwithstanding much irrelevant and inconclusive writing, the age the of the "Third Sagam" is about the second century after Chirst; no valid reason has so far been offered to the contrary.

Manimekali is a work of a dramatic-epic character, and has for its subject-matter the renunciation of the heroine. As it treats of this subject it has necessarily to find its setting in contemporary life and thought. While it may be readily taken as a picture of Tamil life in the age of Senguttuvan, its use for purposes of history requires not merely "the insight and imagination" that Lord Morely demands, but a fully developed historic sense which could separate, by sound by sound criticism, the historical grain lying hidden in the chaff of legend and traition. In qualified hands it provides considerable material for the history of the age, and a few data of an important character for Tamil literary history.

It is to be hoped that the English version now placed before the public will lead to a wider study of the poem itself, and a better appreciation of its merits.

Manimekalai is one of "the five great poem" in Tamil. The other four are Jivaka-Chintamani, Chilappadhikaram, Valayapathi and Kundalakesi, of which the last two are not extant. The Tamil owe a lasting debt of gratitude to Pundit Mahamahopadhyaya Swaminatha Ayyar for his scholarly editions of the remaining three works, among other Classics.

Of the three "great poems" that we now have, Chilappadhikaram and Manimekalai, forming a continuous story, belong to an earlier age, while Chintamani is of a few generations later. But in their atmosphere age, while Chintmani is of a few generations later. But in their atmosphere and leanings all the three are more Buddhistic than Hindu. The noble rationalism of self-sacrifice, universal compassion and service promulgated by the great SakyaPrince must have then prevailed widely in South India, where it is now almost unknown. As for the contents of these works, they are not historical biographies of the men and women whose lives they profess to narrate, but are rather romances abounding in the supernatural and the miraculous. In saying this I do not forget that the reputed authors of the two earlier poems assure us that they were contemporaries of the events they set forth, one them being proved of her chastity by a miracle, while the other was a prince in the where, while the other was a prince in the land where, by another miracle, she ascended to Heaven woith her husband. Eather I remember how Valmiki too claims to have lived at the time of Rama and to have taken no insignificant pert in the incidents of the immortal epic which bears his name. It may be that this was a form of literary convention in those days, a trick of the trade' not unknown in, other literatures or to our own age. Nor do I forget the fact that several historic personages, whose co-existence has been verified by other and more authentic records, are referred to, or made to figure, in these works. Indeed I do not assert that Kovalan and Kannaki, Manimekalai and Madhavi, never existed and are wholly fictitious, or even that they had no such careers as have been assigned to them by the authors. But I do say that not all the incidents of their lives, set forth in such minuteness of detail, could have happened, and that some of them never did take place. Chilappadhikaram differs from Manimekalai in this respect, that its main story, up to the point of Kovalan's murder by the king's guards, is quite, probable, and miracles step in only later; whereas in Manimekalai the author resorts to the supernatural almost from the beginning. Such wonders as flying the air, remaining invisible or changing one's form at will, feeding many people out of a small bowl without replenishing its contents, and stone-images speaking to human beings, are the common stock-in-trade of all romances and legends; and they prove nothing more than the faith and credulity of the times. The few true original facts, travelling from mouth to mouth, or perhaps from generation to generation, must have gathered supernatural trappings and miraculous decoration in course of time. Around such a doubtful nucleus the port's imagination has bodied forth the forms of things unknown, andhis iron style, screeching on palm leaves, has given to aery nothings local habitations an names.

But the life manners of the people so livingly depicted in these poems stand on a different footing; and making due allowance for artistic idealization and caricature, they become invaluable records of the state of the country and the lives led by our forefathers some fourteen to eighteen centuries ago. The reader will do well to bear this in mind while studying these classics, and neither swallow whole as authentic contemporary history nor reject the whole as imagination run wild.

Besides being comparatively simpler in style than most other poems of the 'Sangam Age', Manimekali i by far the most modern in spirt of them all. The ardour for true democracy and social service which pervades it, the transformation of a prison-house into a Home-of-Merchy which it records, it aggressive and scornful hostility to the system of caste based on birth, and the curious fact that most of the fallen women who figure in it are given Brahmin parentage, - these are some of the features which will surprise and interest the modern reader. But the poem has not much of plot to hold the reader's attention, after the love-episode between the heroine and the prince. It revels in the supernatural, and, towards the close, becomes boresome. For this fault and other reason, a scholar of our day has doubted its reputed authorship, and suggested that "it was probably put together by a monkish poetaster".

The author of Manimekalai was Chathanar, a native of Madura. He was known also as Koola-vanigan (grain-trader) Chathanar and Chee-thalai (pus-pate) Chathanar. The former epithet denoted his means of livelihood, while the latter was no small complement to his fine literary taste and acumen. He was a member of the Academy at Madura, whose privilege it was to hear and appraise literary productions. So jealous was he of the honour of the Muses that he could not bear to see it outraged by pseudo-poets and scribblers, and he lnocked himself on the head with his iron style, bewailing his ill luck, whenever he had to listen to verses void of sweetness or sense. And even in those golden days of Tamil literature and in the great Madura Academy, true poetry was so scarce that the abscess, first formed on the crown of Chathanar's head by thus repeated knocks, had no rest to heal and he went about with a "pus-pate". It is said that this historic sore healed only when the unique and peerless Thirukkural came before came before the Academy for adjudgment and was expounded before it for many days sunning, during which time the "pus-pate" remained undisturbed.

Manimekalai deserves to be better-known and studies in these days. So it is that I have ventured to place, at the request of the publishers, this popular version of it before the general reader and the student-world. In seasoning the old wine for the new bottle, I have taken some liberty with the original and I have been obliged to places, however, it has been a pleasure to translate the poem almost word for word for word and I hope I have nowhere violated its spirit.

In conclusion, I thank Dr. S. Krishanaswami Aiyangar for his ready kindness in contributing a forewords and Mr. J. H. Cousins for kindly looking over the proofs and offering valuable suggestions. I must not fail to record here my great debt to an English rendering of the poem, more or less literal, which my daughter M. Lakshmi Ammal made for me to lighten my task. 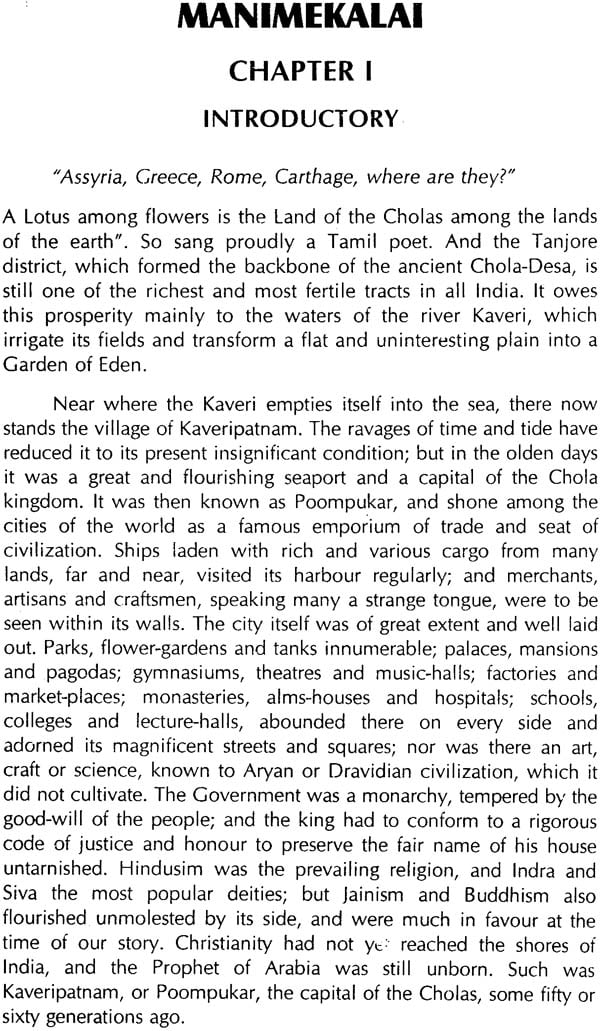 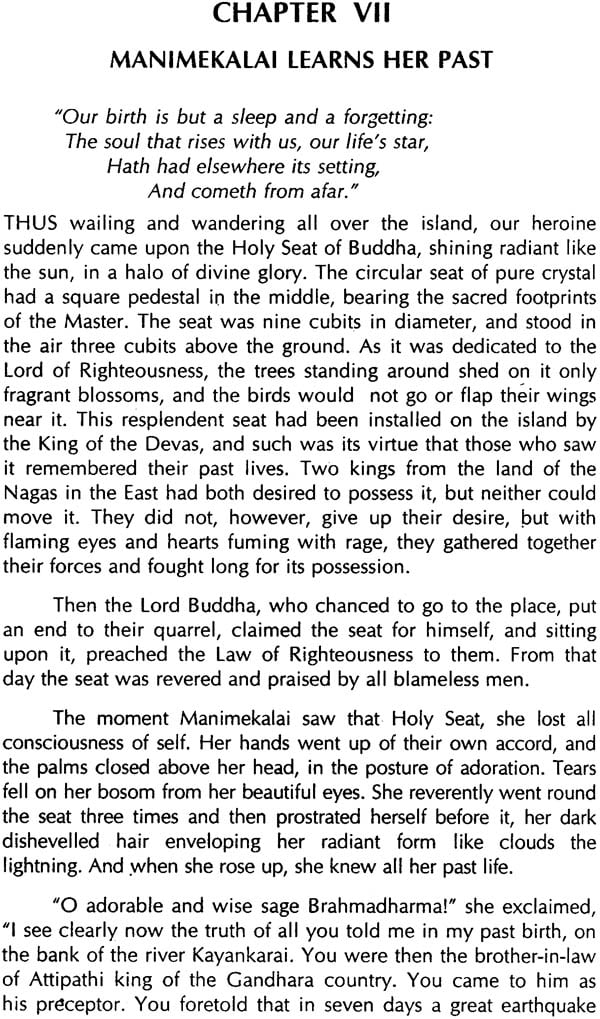 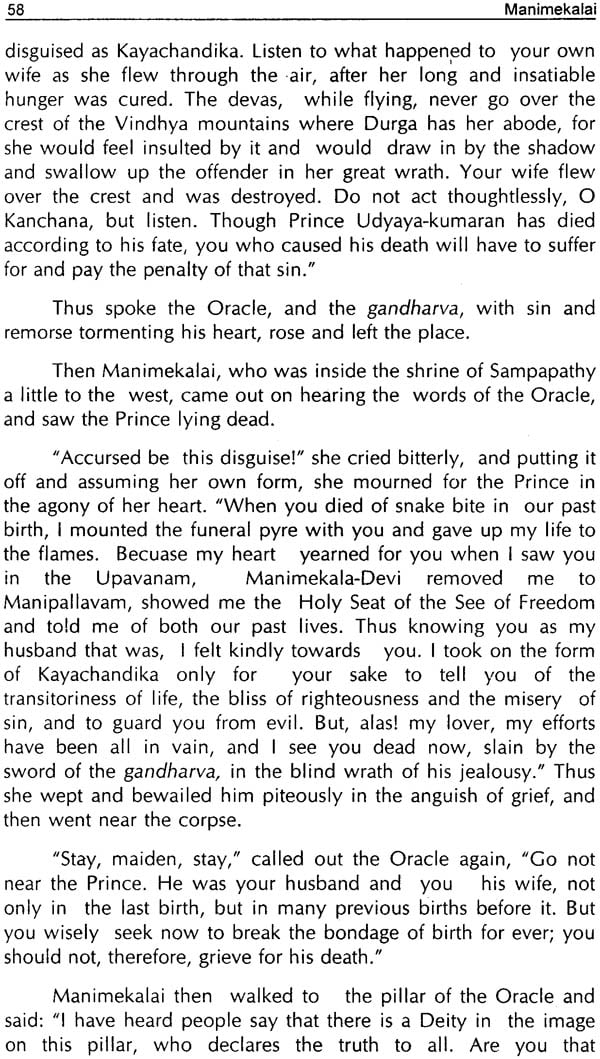 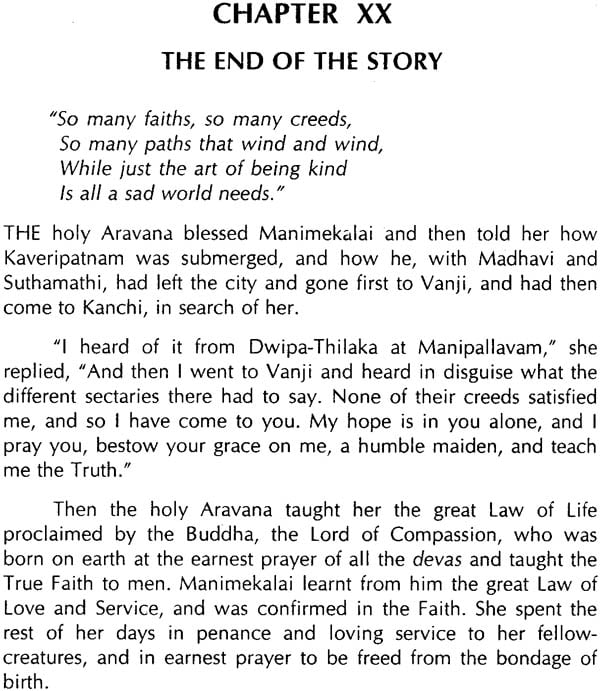 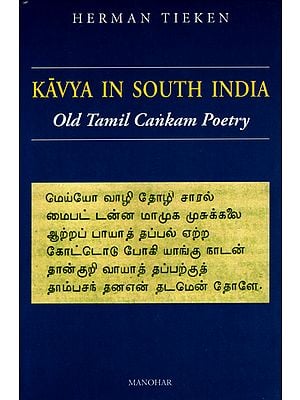 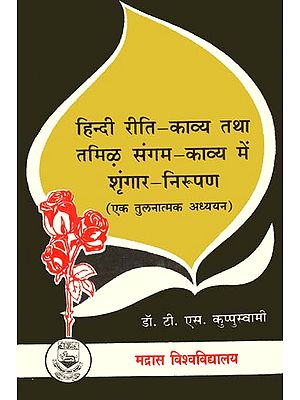 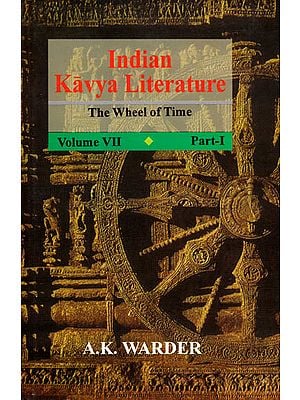 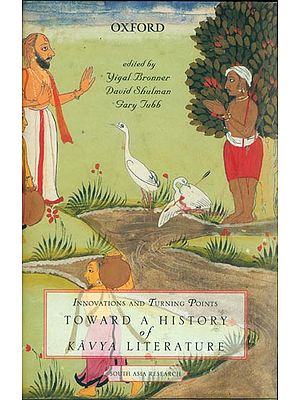 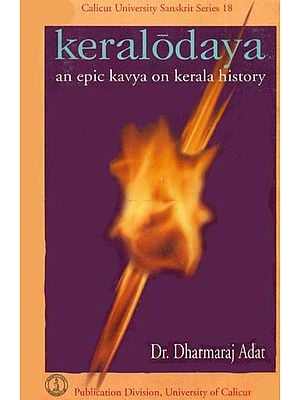 Negotiations with the Past: Classical Tamil in Contemporary Tamil
By Kannan M. & Carlos Mena
$52.00
FREE Delivery 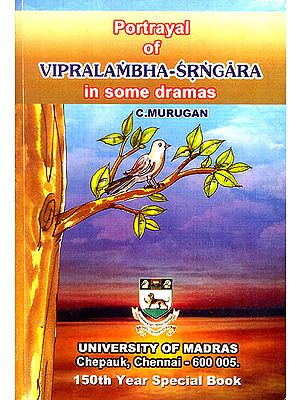 Portrayal of Vipralambha-Srngara in Some Dramas
By C. Murugan
$29.00
FREE Delivery 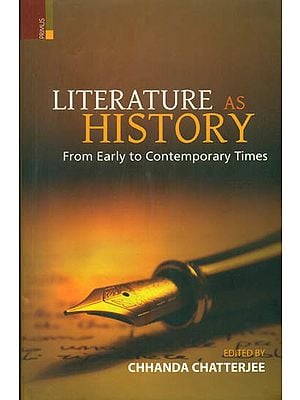 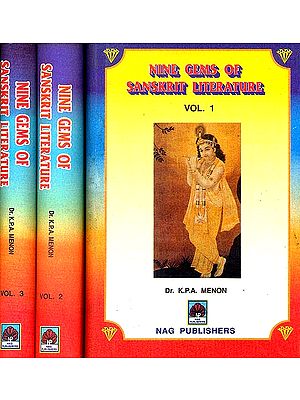