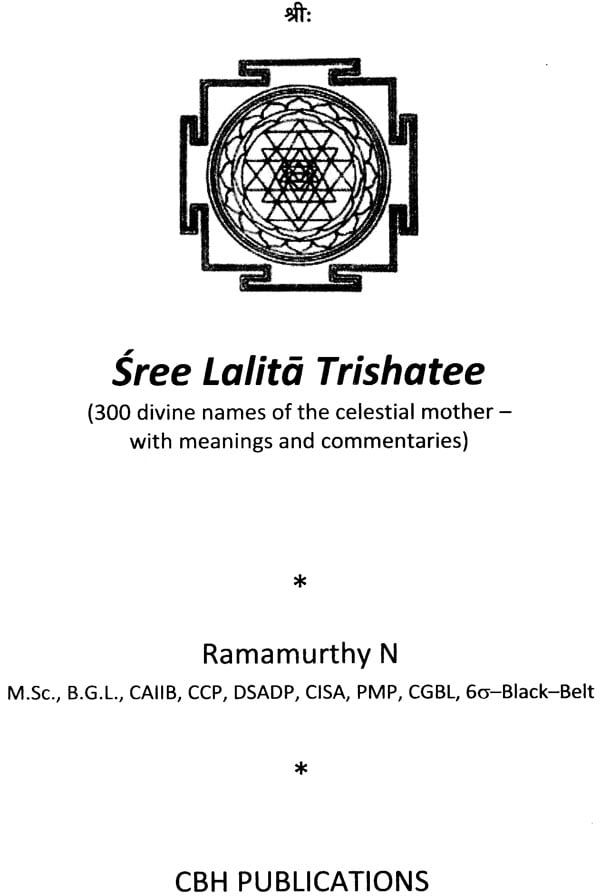 Shree Lalita Sahasranama and Lalita Trishatee are considered to be very secret. In fact any Shreevidya worship should be kept secrets and more so in these two hymns. Even a devotee like of Sage Agastya had to struggle to get initiated in these two hymns by Lord Hayagreeva. There are not many books available on Lalita Trishatee. Even the available books just give the hymns or 300 names. Very few books give one line meaning of names. But this book completely gives Shree Adi Sankara’s Bhashyam (commentary in Samskrit) on Lalita trishatee into English. In the Introduction part it gives some vital and rare information about Lalita Trishatee. Wherever possible, comparisons with Shree Lalita Sahasranama and other texts like Shreemad Bhagavad Geeta etc. are also provided. Shree Bhaskararaya, who wrote commentary for Shree Lalita sahasranama has clearly indicated “One who chants any mantras without understanding the meaning is like a donkey carrying a load of sandal-wood, not being able to feel its aroma but only its weight”. Hence this books aims at clarifying the meanings in simple English. Hope the reader gets benefited. Let Sreedevee shower her choices shower her blessings on the readers.

Among the sanmata established by Sree Adi Sankara Worship is the best and sreevidya is the most suitable means to reach Sakti. Sages have confirmed that “charame Janmani Yadha Sree Vidya upasako Bhaveth”, only the person who has done Punyas in previous births can learn Srividya worship in this birth. Sreevidya has to be obtained from an appropriate teacher (guru) and cannot be learned and practiced by reading the books or hearing from CDs. Still an easy way is to read and/or hear Sakti related puranas and stotras. Saptasatee, Lalita Sahasranama and Lalita Trisatee are three major Sakta related stotras.

There is a general feeling that Sree Lalita Trisatee is difficult to chant or read. But it is not really so. But it is not really so. Out of the three stotras Sree Lalita Trisatee is the most sacred and result oriented, since it is Sarva Poorthikar Stotram. Also it encompasses Pancadashaksharee mantra itself in it. As detailed in the result part by the author, reading or chanting or simply hearing this stotra or performing archana using the 300 divine names will fetch enormous results as desired by the devotees. But still the results will be multiplied and also the errors or mistakes will be reduced if it is done after understanding the meaning of the names-not only the apparent meaning, but the inner meaning or tatvas represented by each name. Another benefit is-understanding the meanings would enable the worshippers to focus more on Sreedevee and meditate upon her.

In this regard this book will definitely be of use to the readers and sakta worshippers. It is a good that the author has given the names in Samskra also so that there would not be any mistake in pronouncing the name.

All the Sreevidya mantras are to be treated as very secret. It has been mentioned by the learned that a Sreevidya worshipper (upasaka) should not reveal to all he is a Sreevidya Worshipper. More so the mantras. Even the guru should not teach the mantras to his disciples unless it is demanded by the disciple unless it is demanded by the disciple himself. This has been clearly explained in this book during the introduction part as a dialogue between Lord Hayagreeva and sage Agastya.

Sree Ramamurthy is a seasoned and versatile personality in various fields from the book his knowledge in Samskrit can easily be understood. He has lot of passion for learning and equally spreading the knowledge as well. He has taken much effort to make the language so simple so that the book is readable even by lay men. After reading this book in English we requested him to write the book in Tamil also so that it could reach a wider public and immediately he responded and we have decided to publish the same.

We pray to Sreedevee, to bestow her complete compassion on Sree Ramamurthy to continue his service to the spirituality for a long time.

There is no doubt that Sreedevee will show her blessing to all the readers.

Hinduism is conglomeration of six different religions (or sub-religions) called sanmata. This has been founded by Sree Adi Sankara in the 8th Century C.E. It centers on the worship of the six main deities, viz., Siva, Visnu, Sakti, Ganesa, Soorya and Skanda. The Subreligions are called as:

This system based on the belief in the essential oneness of all deities, the unity of Godhead and their conceptualization of the myriad deities, as various manifestation of the one divine power, Brahmam. The above list does include a sub-religion called Samrtha-generally understood as Saiva. But Samrtha is a little different from saiva. They are Sama-artha-equally treating all the deities.

Sakta Religion:
The ardent devotees or worship of sakti or sreedevee belong to Sakta religion. Among the various texts on sakta the major ones are:

Namavalees
Archana or Namavalee is performed on various Gods as Ashtothra (108), Trishatee (300) and Sahasranama (1000) names. The Sahasranama is repeated to count to Lakh or Koti, etc.

According to the famous Tamil Saying “Avanarlaleye Avan Tal Vanangi” to worship his feet with his own blessing- a humble attempt has been made in this book to provide in simple English the commentaries of the “Lalita Trishatee”. The English language cannot bring out the exact and complete sense (meaning) of many of the concepts are culture related and only a person and bought up with interest in Vedas or is fully exposed to Vedic culture can fully comprehend the meanings. The extraordinary plasticity of Samskrit words and the possibility of changes in the meanings by slight alteration in the prefixes and/or suffixes and the possibility of splitting complex words in different ways resulting in rendering different meanings of the compound words make Samskrit a unique language. These factors make it almost impossible to bring out in English, the exact force of the descriptions in Samskrit since the Samskrit words refer to psychological, spiritual and cultural concepts more than the dictionary meanings. These difficulties in expressing the concepts of the Vedic Sages in the English language necessitate repetitions-which may be sometimes boring, but which could not be avoided. With all these constraints an attempt has been made to bring out the commentaries of “Lalita Trishatee” as much possible simple English.

This author has earlier written a book “shree Lalita Saharanamam”-a complete Baskararaya’s bhashyam in simple English. There were some requests to write a similar book Lalita Trishatee in English and hence this book. This is mainly based on Sree Adi Sankara’s commentaries on Lalita Trishatee. Wherever possible comparison with Lalita Sahasranama and other texts are quoted. Lalita Sahasranama, wherever quoted is completely based on Shree Bhaskararaya’s commentaries. Hope the readers would be benefitted by reading this book and blessed by Shreedevee.

Conventions used in this book: wherever she is used to indicate Shreedevee it has been written in bold as She. The transliterated Samskrit words are written in italics-for instance Devee. When Samskrit words are transliterated in English Diacritical marks are used to correctly pronounce the words. However the same has not been used in its entirety in this book, since it makes the reading a little more difficult and since this book is intended for common audience.

My humble pranams to HH Sree ramananda Saraswati Swamiji of Srichakrs Rajarajeswari peetam, Madurai for his nice introduction and some pleasantries about this edition and about me. I am more honoured . As ordained by him I have written this book in Tamil also and the same has been published and released by him during Vyasa Poornima on in July 2013.

I will be failing in my duty, if I do not thank Sree M. Easwaran, who has got this book printed and published. He has reviewed the book and gave nice feedback to that the book is in this fashion. Nice job done-thanks a lot Sincere thanks are due to all those who supported in this noble cause.

The readers are requested to give all comments and feedback to the author. 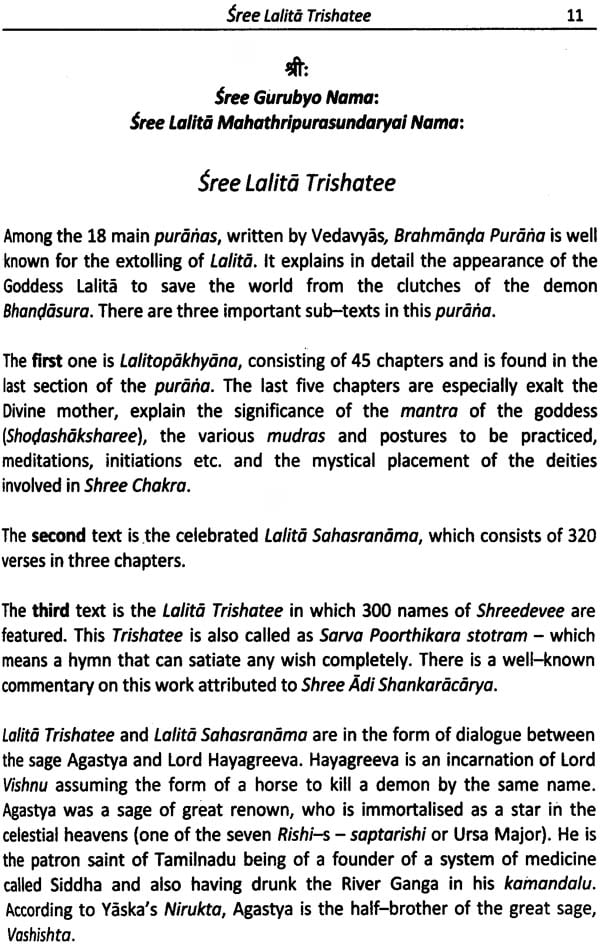 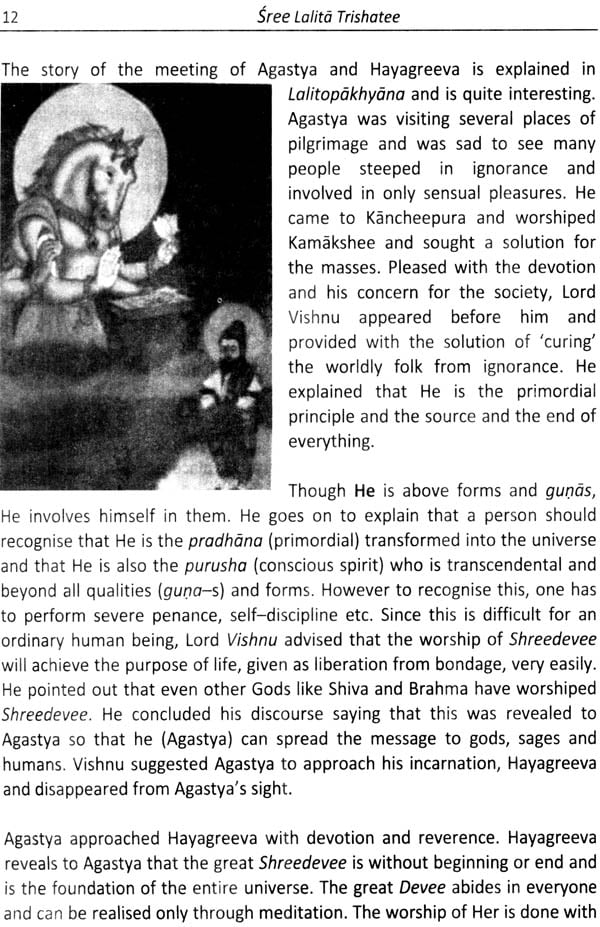 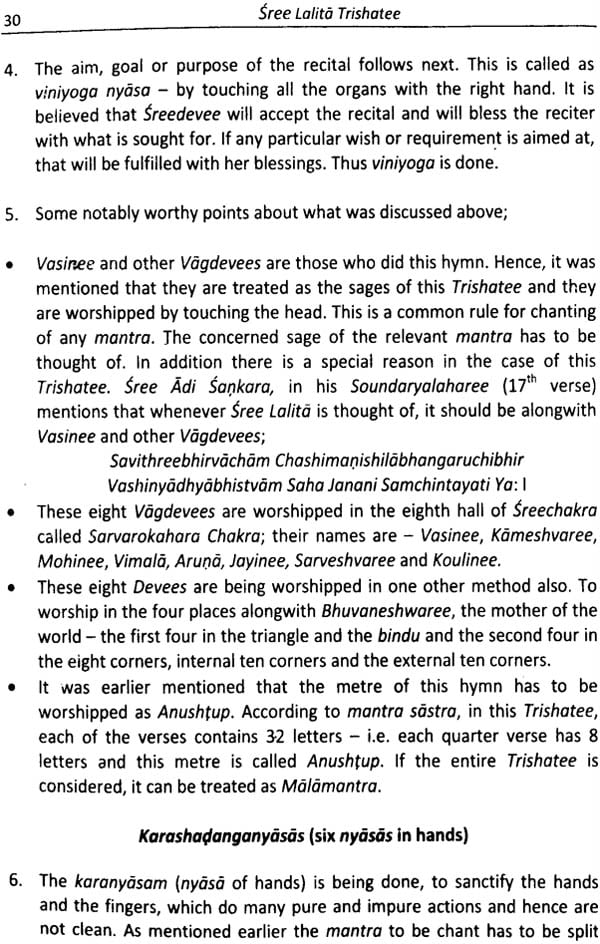 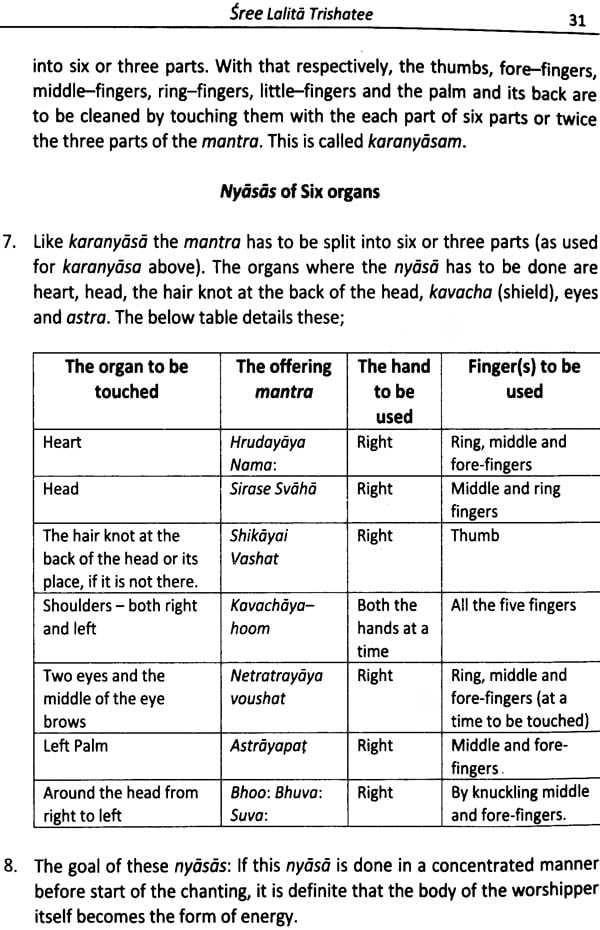 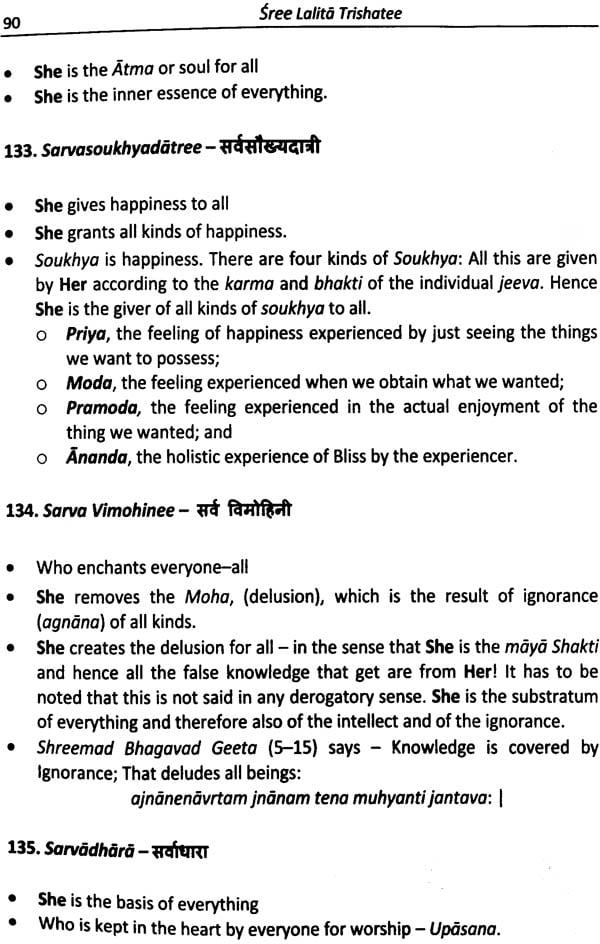 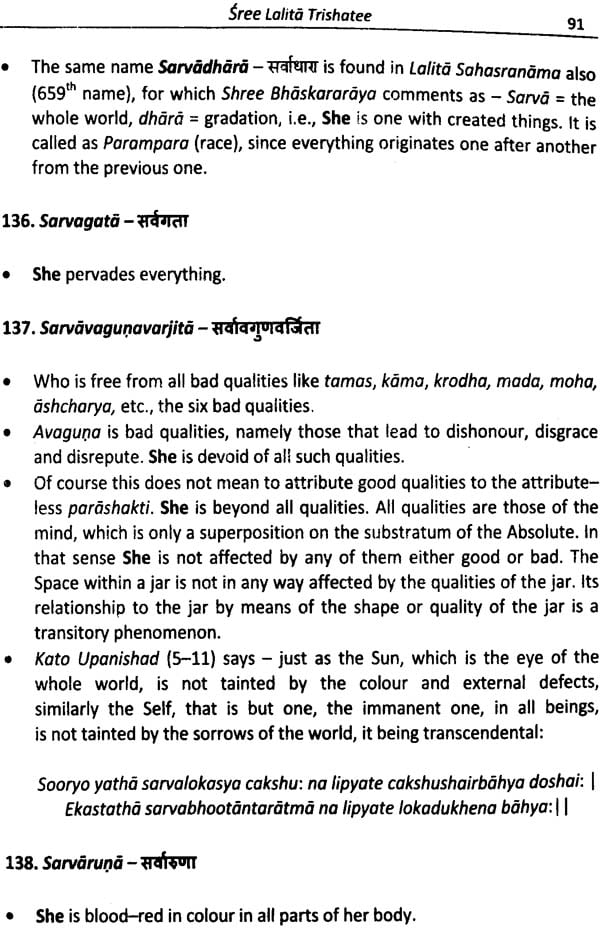 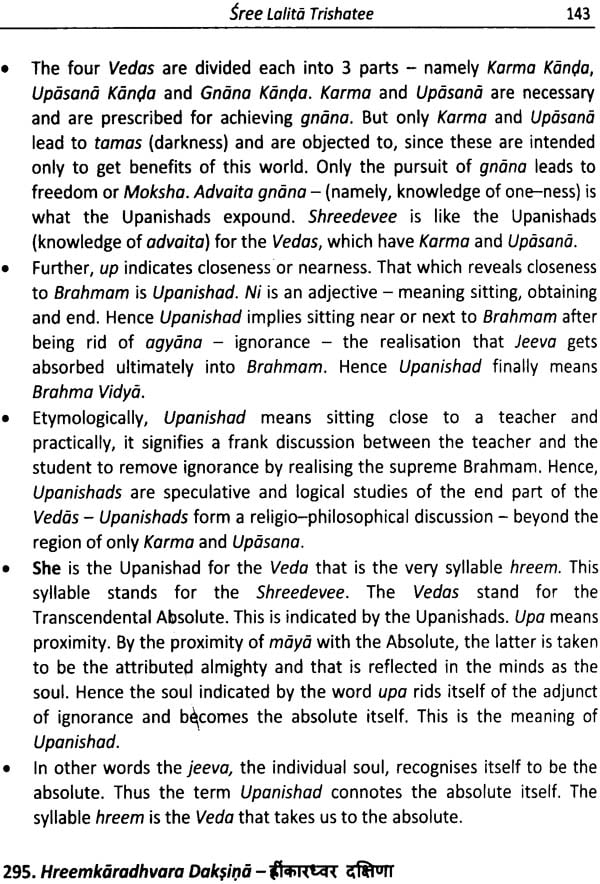 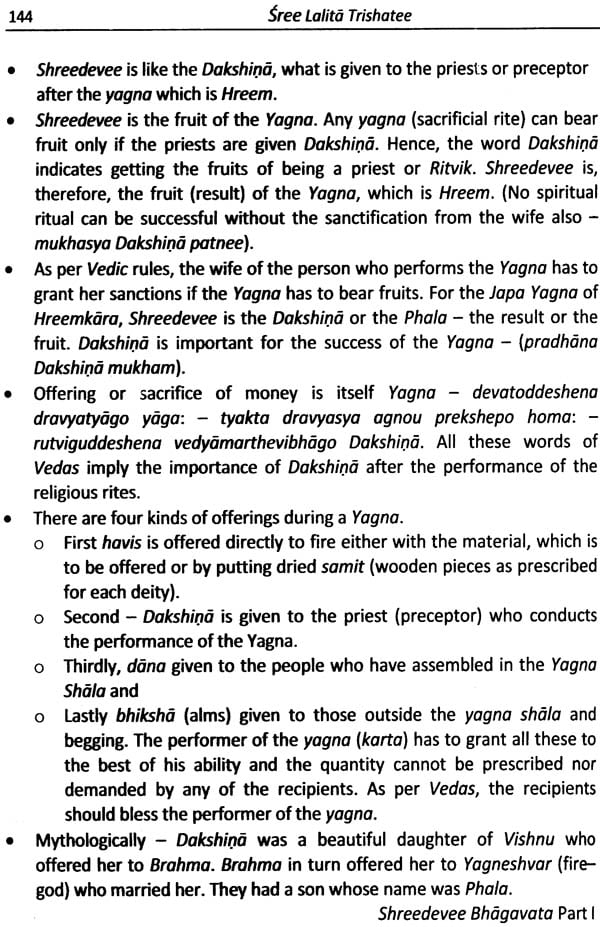 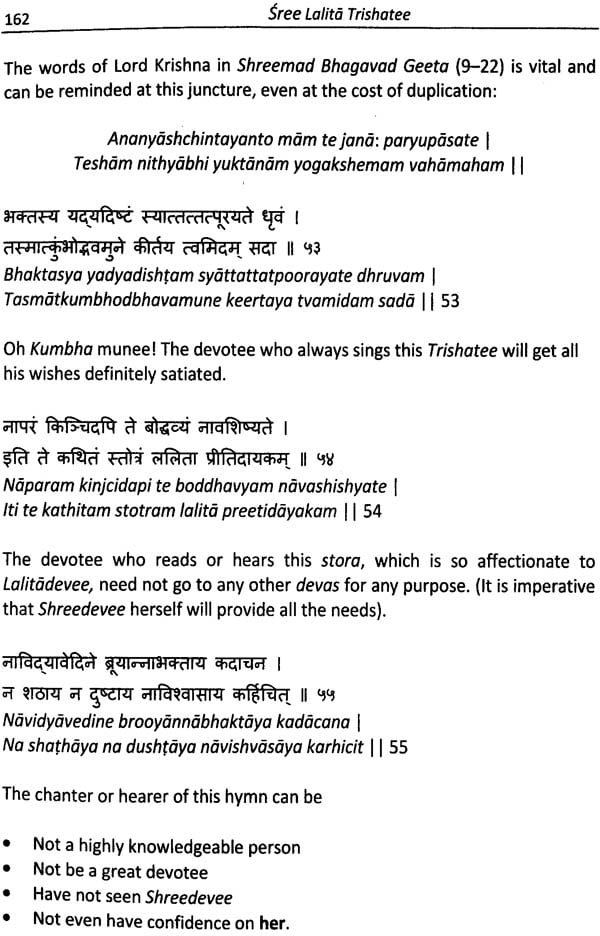 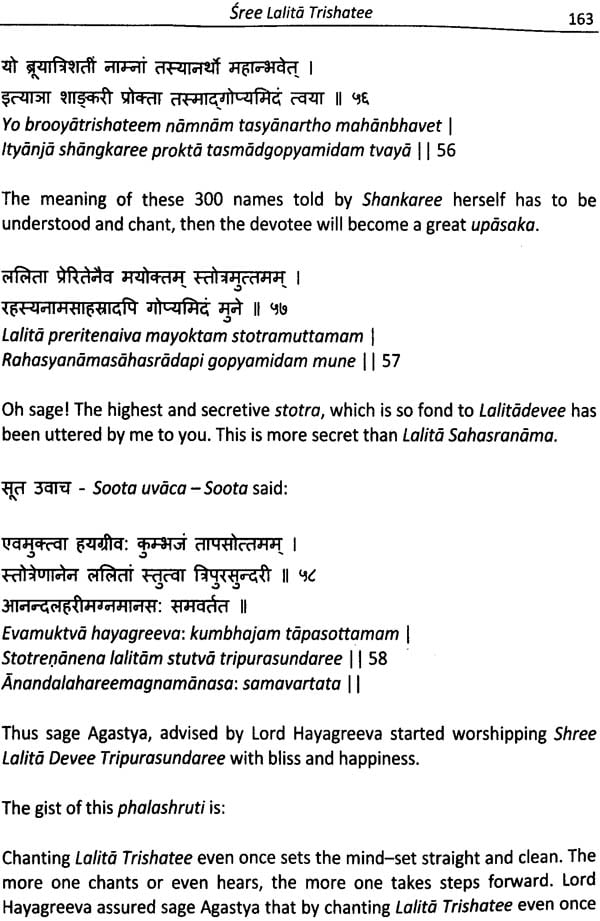 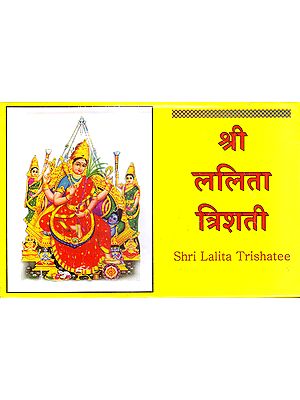