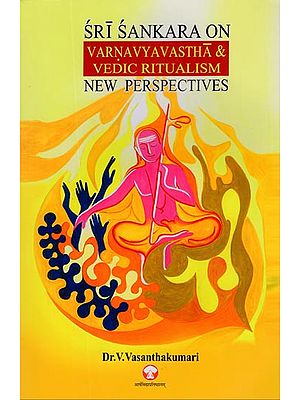 Dr. V. Vasanthakumari, MA. B.Ed, M.Phil., PhD., Professor in Vedanta, Sree Sankaracharya University of Sanskrit, Kalady. She published 3 Books, 40 Articles and presented 75 research topics in various international, national seminars and invited lectures. She has been undertaking research on Sri Sankara’s works for the last 20 years. She is a Contributing editor of SriSankaraSarasvataSarvasvam.

Dr. V. Vasanthakumari ventures a daring new look at the contributions of the great philosopher-saint Sree Sankara. A fresh avenue is suggested; it helps avoid roadblocks created by hasty conclusions stemming either from hyper-adoration or pre-emptive negation. The author follows the wise path of the golden mean and succeeds in integrating apparently irreconcilable standpoints. Not an easy task, obviously.

Of course, a great lot has already been written about the life and works of Sri Sankara, some of it by very eminent scholars. However, even today, Sree Sankara poses a dilemma to some discerning students of philosophy. How could a person of such great erudition and pristine wisdom approve of tenets like denial of rights to the lower castes and glorify the anacharas and rituals detailed in the karma kanda of the Vedas?, they argue.

The author convincingly establishes the fact that Sree Sankara was not only an academic philosopher but also an acclaimed social reformer. By explaining the texts in the light of his own methodology, he unravelled the blemishes of the then prevailing social situation, which paved the way for future social reformers to fight against them. Moreover, having opted for nivrtti marga - the path of renunciation - he held all physical circumstances as merely ephemeral and therefore irrelevant. Knowledge alone was what mattered. Assuming Sree Sankara to have fought shy of the need of the hour is tantamount to blaming him for not reacting the way an activist of today would have. He was made of different material and possessed the right disposition to enable him to carry out his life's unique mission - the re-definition of Vedanta and its social relevance.

Of the three faculties that man has - the senses, the mind and the intellect- one can either rely on any one in particular, exploring it to its limits so as to achieve parama pada or make use of all three in unison to the same end. We have jnana yogis, bhakti yogis and karma yogis and also avadhutas like Sri Ramakrishna Paramahansa who opted for the integrated path. Each one deserves credit for what they achieved by their different styles, standards and paradigms.

The subject matter of the book is well-researched, its diction surprisingly simple for a work of this dimension, the approach judicious and creative at the same time and the conclusions, therefore, fully warranted. An impartial enquiry always helps pre-empt weeds of confusion and misleading discussion; one only wishes that a work of this nature, content and approach had been accomplished earlier. Well, better late than never as the saying goes.

Sri Sankara revealed the essence of Advaita Vedanta and his birth raised India, especially Kerala, to a holy place. Advaita attained its highest peak due to Sri Sankara's dedicated efforts. He put his heart and soul into spreading the essence of Advaitic vision "Brahma satyam Jaganmithya", "Jivo Brahmaiva Naparah" throughout India and established Advaita darSana as the main pillar of Indian philosophy. Strenuous efforts had been made by Sri Sankara to establish his Advaitic vision such as the establishment of maths, his exuberant works such as bhasyas, prakaranas, stotras and tantras, formation of DaSanami sampradaya etc.

Sri Sankara, who propagates notions which transcend caste and religion, is often regarded as the exponent of hegemonic caste system. He is also devalued as the inventor of vedic ritualism and as a preceptor who nourished evil customs in Kerala, by certain scholars. The root cause of these controversies resides in the commentaries written by Sri Sankara on the ‘Apastidradhikarana’ of the Brahmasitra. However, on examining the social background of that period, one could understand that the works of Sri Sankara are only a reflection of the period and not his own opinion regarding the varnavyavastha. He has performed only the duty of a commentator.

The present study is undertaken in six chapters. The first chapter is introduction. The second chapter gives stress on a general analysis of the Brahmasitra, the author, his life time, the form and content of the Brahmasitra and commentaries thereon. A bird’s eye view of all the four adhyayas of the Brahmasitra is also presented. The third chapter clearly examines the Apasudradhikarana. All the five sutras of the adhikarana are analysed here. The attitude towards the Sudras found in the ‘Apasudradhikarana’ is not at all palpable to the modern minds. At the same time, the Brahmasitra has to be defended too. The method adopted by some to achieve this end is to consider ‘Apasudradhikarana’ as an interpolation. But it delineates the correct approach to this problem by explaining its relation to the sixth chapter of Mimamsa sutras. The chapter establishes that the Apasudradhikarana is not an interpolation and also explains the commentaries on the adhikarana. Commentaries of Sri Sankara, Ramanuja, Madhva, Nimbarka, Sripati Panditacarya, Vallabha, Vijnanabhiksu and Baladeva are analysed.

Sub-commentaries are also examined in a general way. Commentaries and sub-commentaries vouchsafe the fact that the Apasudradhikarana is not an interpolation. Sri Sankara paved the way for the Sudris to study Brahmavidya through the Itihasas and the Puranas. The fourth chapter concentrates on the caste system in the Vedas. It also examines the competence of the Sudras for vedic and vedantic studies. The upanayana ceremony, the Sudras in the scriptures, the Sudras and women, the Sudras' competency etc. are also dealt with in this chapter. The fifth chapter reveals Sri Sankara's perspective on the caturvarnya system and vedic ritualism. It further tries to establish Sri Sankara a spiritual revolutionary. The sixth chapter is the conclusion. It highlights the observations related to the controversies among the scholars of repute on Sri Sankara's philosophy. It further expresses as the some total of the author's personal views on how Sri Sankara is able to withstand such controveries. Apart from these, two appendices are also added to the book.

I wholeheartedly express my gratitude to Sri. C. Radhakrishnan who has made his name both as a scientist and as a Malayalam writer and novelist for writing a foreword for this book. I am greatly indebted to Swami Nandatmajanada, Editor, Prabuddha Keralam, Ramakrishna Math, Puranattukara, Thrissur who was kind enough to provide the design and drawing of the cover page, which is most suggestive of the contents of the book. My obligation also stands for Prof. A. Subrahmanya Iyyer, Hon. Manager, Sri Sringeri Shankara Math, Kalady for his valuable review of this book and Prof E. Narayana Kaimal for examining the linguistic aspects in the preparation of this book. Finally, I thank ArshaVidya Pratisthanam, Rameswaram, Amaravila P.O., Thiruvananthapuram for bringing out this book in the present form. 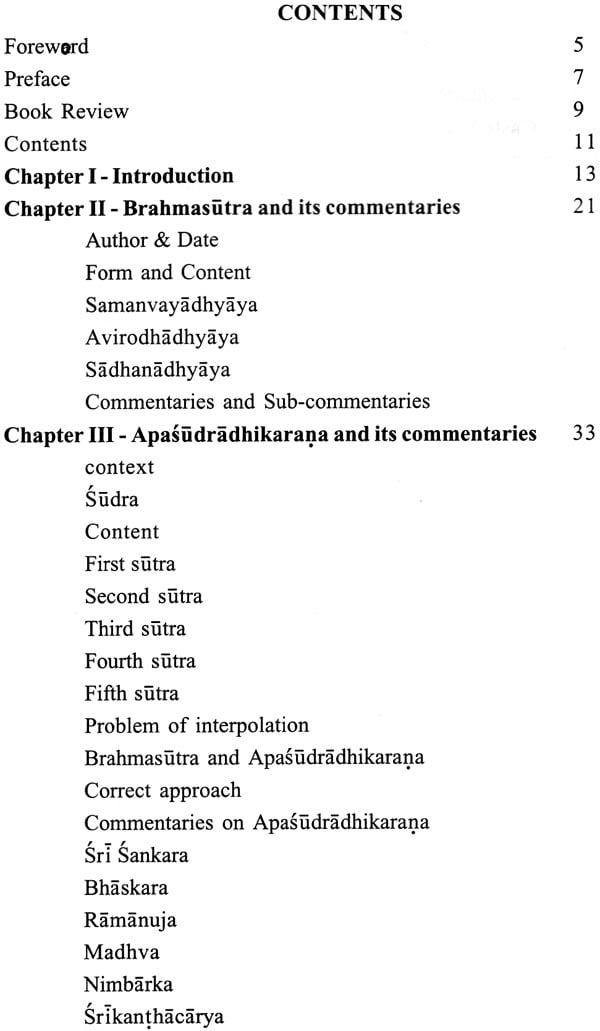 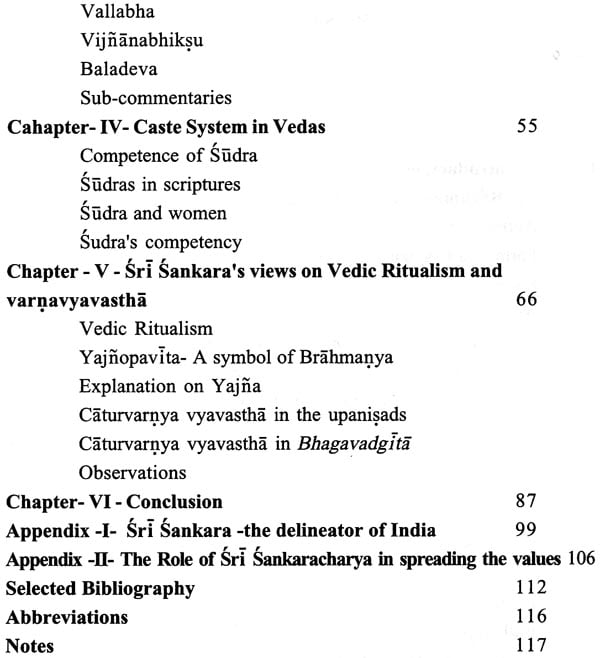 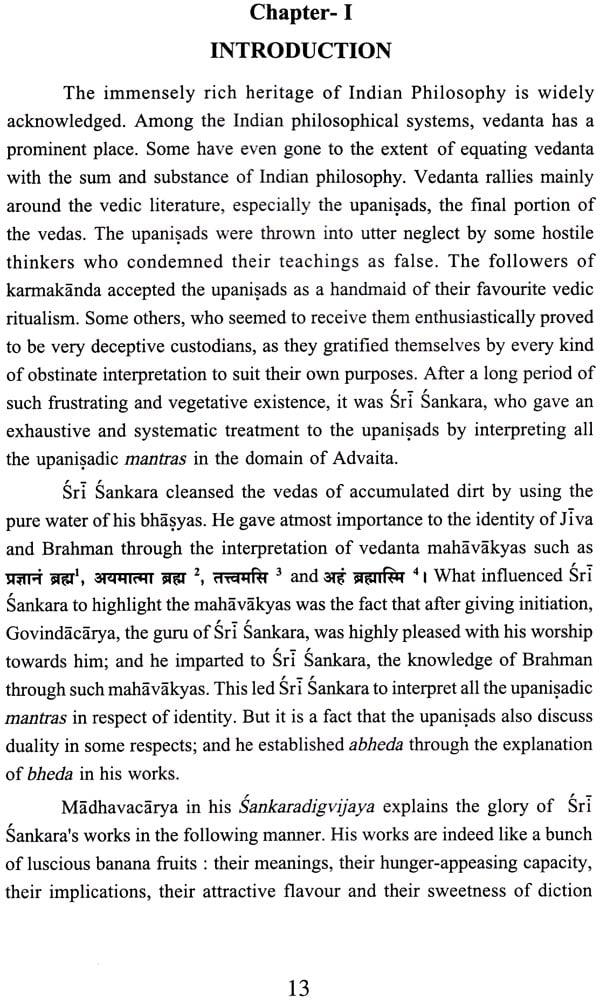 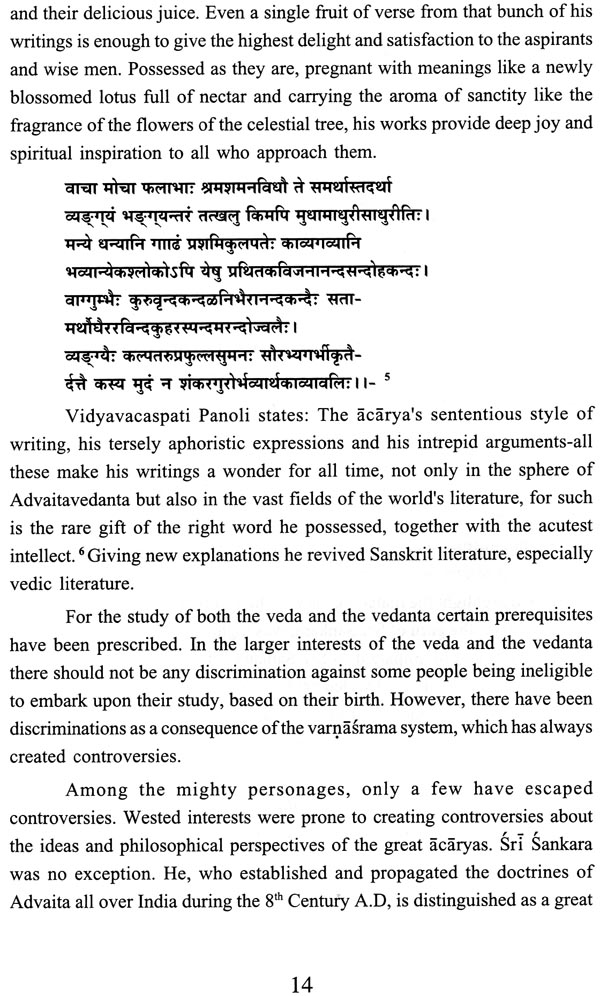 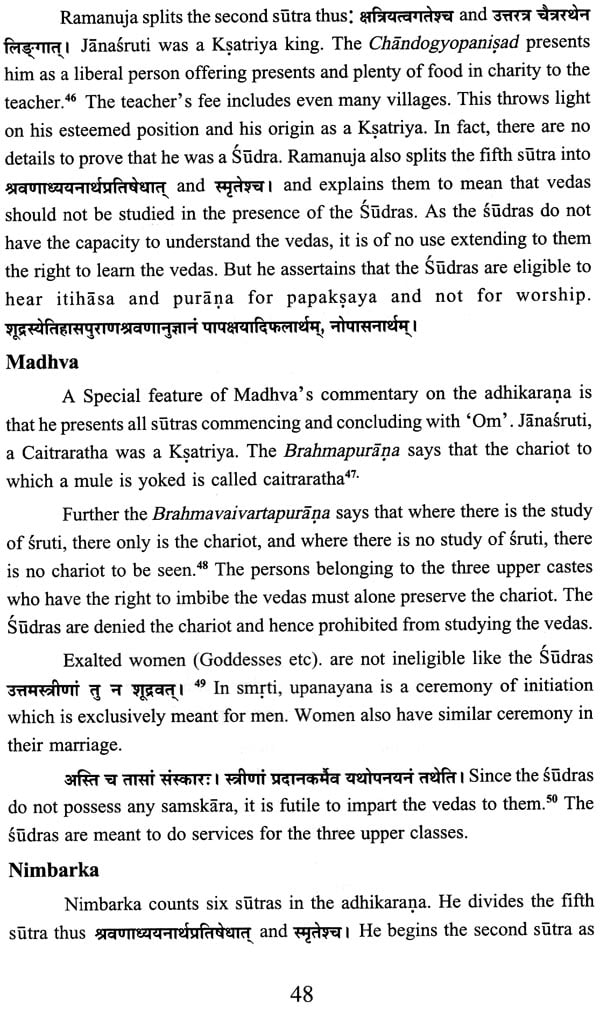 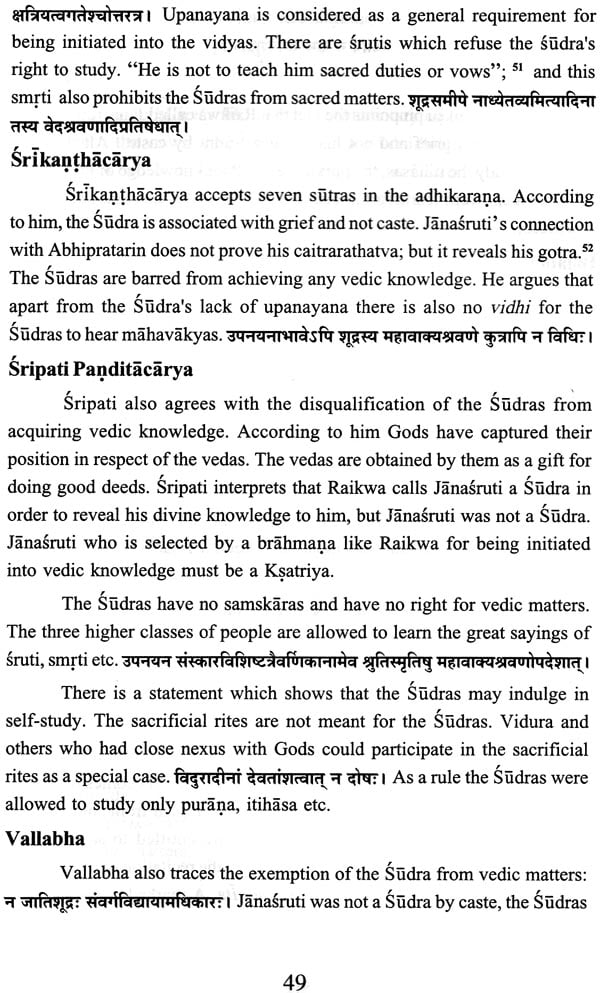 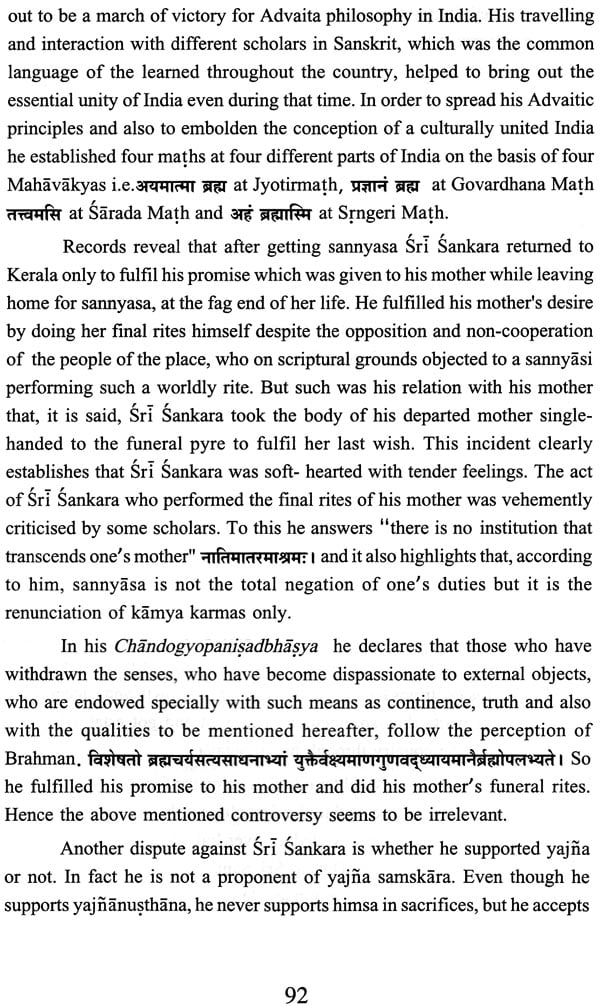 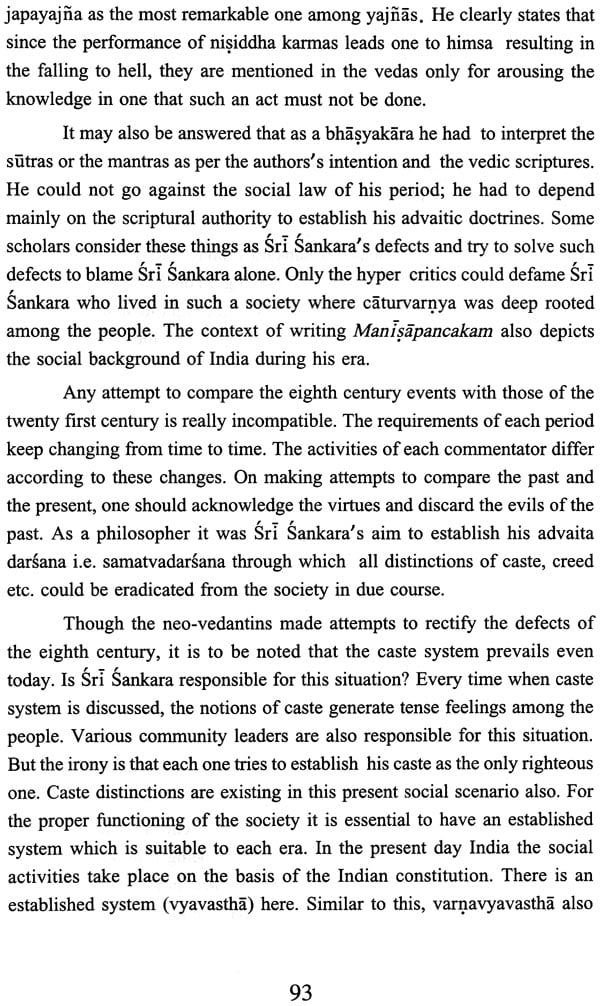 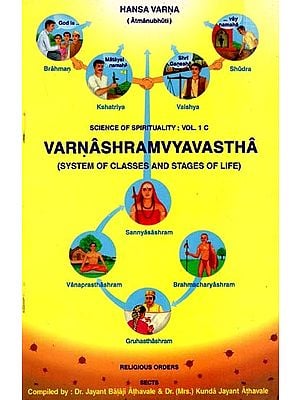 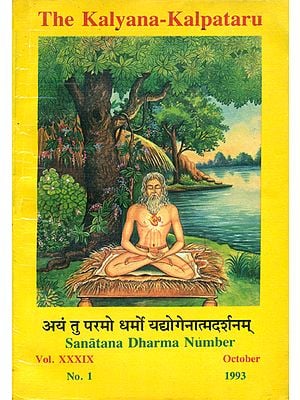 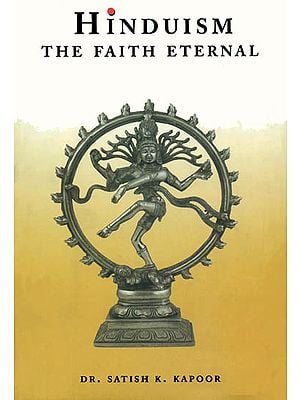 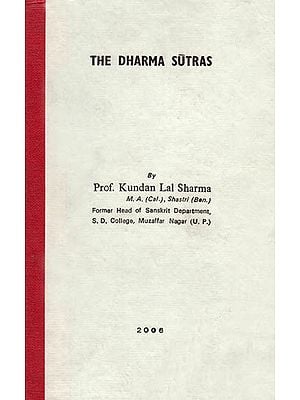 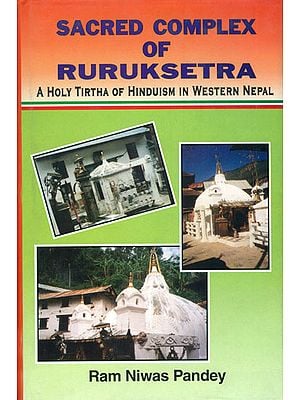