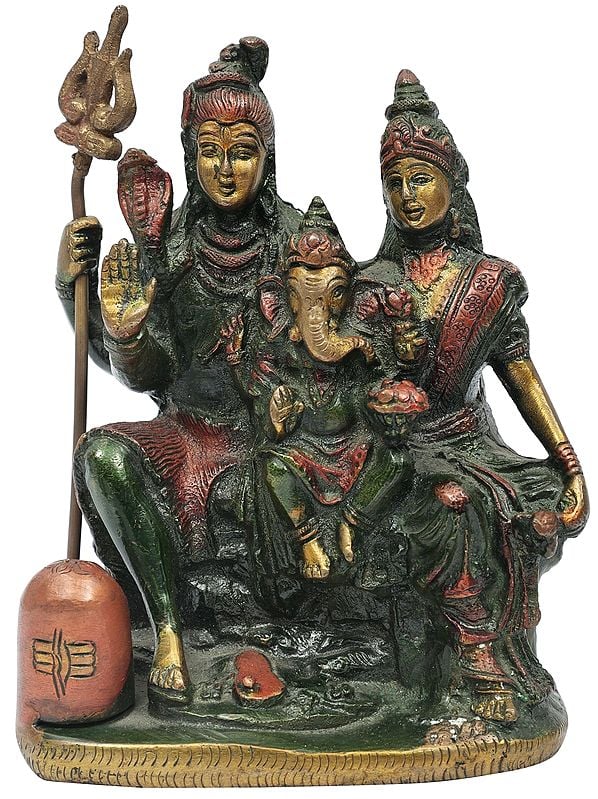 5" Shiva-Parivar With Lingam In Brass | Handmade | Made In India

While Lord Shiva is a recurrent subject of choice with Indian artists and sculptors, His role as the divine householder would make for an unusual pick for your space. The beauty of Shiva-parivar is to be found in this work of spiritual art, where He is sculpted right next to Mother Parvati. The little Lord Ganesha is seated on their lap. The cosmic father-and-son duo have raised their hands in blessing over their ihlokiya devotees.

Parvati Mata is wearing a sumptuous saree fit for the devis. As if woven from gracious gold metal, the same has been sculpted with such precision as to reveal the contours of the maternal form underneath. Seated in lalitasana as is Her husband, Her stance is one of wifely devotion and reverence towards Him. The gold of Her saree and shringar matches His loincloth and the snakes that constitute His shringar.

A sacred lingam is at the feet of the Lord. A golden Shaivite tilak has been etched on to its smooth, dome-like surface. A similar tilak is on the head of the son of Shiva, Lord Ganesha, who is at His most adorable in this sculpture, cradled in the lap of His parents. The artist’s attention to detail sets this work apart from other Shiva-parivar statues - the paduka of the other foot on the pedestal, a hand of His at His wife’s shoulder, and the towering jaatamukuta of Hers that matches His.