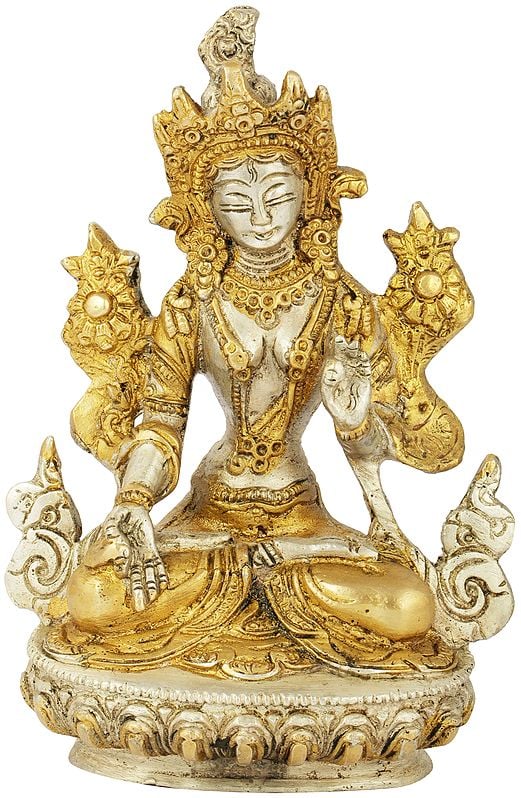 6" White Tara, The Supreme Female Deity In Tibetan Buddhism in Brass | Handmade | Made In India

Natural Brass
Quantity
Ships in 1-3 days
Notify me when this item is available
Goddess Tara, one of whose forms, known in the Buddhist terminology as Tara’s Bhedas : manifestations of Tara, this excellent statue represents, is the supreme female deity of Buddhism. Literally meaning one who helps wade across the tumultuous waters, of the sea or the life’s, protected against every calamity as also redeemed from material ties and hence the most loved, effective and powerful divinity in the Buddhist line, Tara seems to have emerged in the Buddhist pantheon around the third-fourth century. Initially she was worshipped as one who protected navigators and guided boats. After the centres of Buddhist worship shifted to Himalayan hill ranges the region’s rough weather, its perils and uncertainties and the tough conditions of life, every moment being a trial to survive, greatly required a spiritual power that on one hand rejuvenated people’s spirit and zeal, and on the other, stood by their side as their ultimate protector. Tara was their natural choice. In her they saw the protective and caring mother full of the softest feelings but also the most ferocious avenger ready to avert or even destroy whatever inflicted or tried to inflict harm on her child. In different shades of the mother’s emotional mind they discovered Tara’s various manifestations. In no time Tara was the universal protector in Himalayan hills.

As in Brahmanical pantheon the Devi is perceived as the Adi-shakti – primordial power preceding all beings and all forms, even the Great Trinity, in Buddhist stream such Adi-shakti that preceded all beings and the entire manifest cosmos is Tara. The Mahayana Buddhism consecrated her on the same divine heights that it attributed to Buddha himself. It contends that Tara was the mother of all Buddhas and all Bodhisattvas, and the Great Master was not excluded. Perhaps this reverence to Tara gave birth to the myth that she descended from heaven on the earth at the time of Buddha’s Mahaparinirvana. Sometimes the myth is linked to Buddha’s mother Maya but simultaneously Maya is linked to Tara as incarnating her. It suggests two things, one, that after the Buddha abandoned his mortal frame, Tara emerged for accomplishing his role, and the second, that Tara is beyond time. She was there when Buddha was not born, along all Bodhisattvas and before, as also she was there after the Great Master passed away. Those thinking on the line that Tara is the Buddha’s mother maintain that Buddha was born of Prajnaparmita, the perfection of knowledge and the highest metaphysical principle, and Prajnaparmita is none other than Tara in her Sita – White manifestation.

Tara is said to have hundreds of manifestations, though five of them : ‘Sita’ or White Tara, with white body-colour, Shyama Tara with green body colour, Bhrakuti Tara with yellow body-colour, Ekajata Tara with blue body colour, and Kukukulla with red body colour, are better identified. Related to five sacred colours these five forms are associated with five Dhyani Buddhas, five forms of Tara are their Shaktis. These five forms also represent five elements of cosmos. Except Red Tara each of the other four forms has further manifestations : White Tara having seven, Green Tara, ten, Yellow Tara, five, and Blue Tara, two. This exceptionally beautiful statue, rare in sculptural quality, elegance, finish and minutely rendered details, and conceived with moon-like translucence, revealing divine aura and great magnificence, represents goddess Tara in her Sita or White manifestation. Texts perceive White Tara as timeless youth of sixteen, moon-like lustrous, and as adorned in white and with brilliant jewels. Shakti of Avalokiteshvara believed to emerge out of his tear White Tara is the essence of compassion.

As is usual with her iconic representations, the image of White Tara has been rendered in Vajrasana, her foremost image-kind. It is in this manifestation that White Tara represents Prajnaparmita, the supreme Buddhist deity. Except that sometimes her form is conceived with four arms, the icons of White Tara are rendered with normal two arms, right often held in ‘varad’ – imparting redemption, and left in ‘vitark-mudra’ – interpretive posture. As Shakti of Amoghasiddha she carries in both of her hands, along with their assigned ‘mudra’ – postures, stems of two full-blown lotuses that support on them Vishvavajra – double thunderbolt, flanking her figure on either side on shoulder-level. Tara has several manifestations, some being quite ferocious and as engaged in annihilation; White Tara is always the most benign, compassionate and sublime form revealing rare aesthetic beauty. Her figures are generally conceived with an additional third eye, and sometimes with as many as seven eyes on forehead, hands and soles, though often, not in eye-form but just a motif-like conceived like rays of light symbolising knowledge. Sometimes, especially in Tantric transformation, her images are conceived as four-armed and as playing with her normal two hands on ‘vina’ – stringed musical instrument.