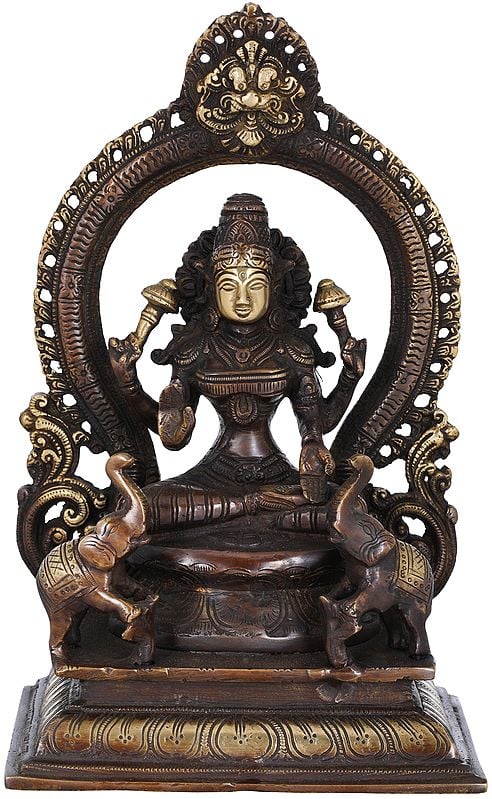 Natural Brass
Quantity
Ships in 1-3 days
Notify me when this item is available
Lakshmi, commonly known as Sri, is the wife of Vishnu and under various names appears in this relation in his various incarnations. If he takes a celestial form, she appears as divine; if a mortal, she becomes a mortal too, transforming her own person agreeably to whatever character Vishnu assumes.

Lakshmi sits in a posture of padmasana on a lotus seat. She is beautifully modeled and her young body is decked with ornaments. Her tall karandamukuta flows into her earrings and numerous necklaces. Her front two hands make the gesture of blessing and fearlessness. She holds lotus flowers in her back two hands. Lotus is a symbol of purity and fertility. Lakshmi is also called Kamala, as one seated on kamala (lotus). Commonly, her iconography shows two elephants in the background lacerating her with water. Here, the artist has brought them in the front of the image as he wanted to incorporate them without spoiling the aesthetic grace of the piece.

This image of Lakshmi is placed in an elaborate niche, designed and carved very well. In the center of the niche is the death mask, known as the devourer and symbolizes the passing of time.

A simple and sturdy rectangular base assembles the animals, the divine image and the kirtimukha aesthetically.