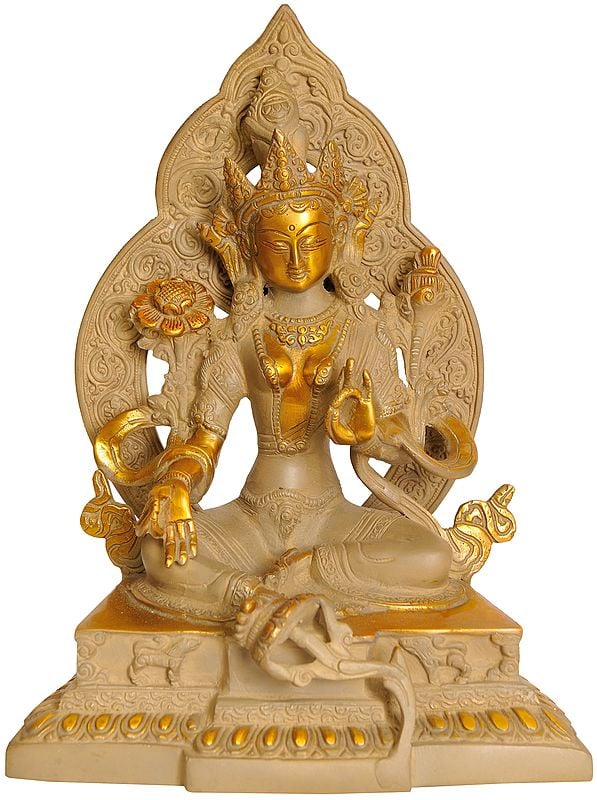 $168.00
A popular figure in Tibetan, Japanese and Chinese Buddhist sects, Tara, the Mother of Liberation is considered a symbol of good luck and widely believed to bring freedom and success in life. She's the female personification of Buddha, and also revered as the Mother of the Tathagatas. She's is sacred to Buddhist and Hindus alike and her blessings are invoked through the mantra: Om tare tuttare ture swaha. Tara literally means a star, and she's regarded as a facilitator or navigator in the spiritual journey through the ocean of life.

This beautiful brass statue is available in two colours: Cemented gold and silver brown gold. The statue depicts the Green Goddess with her left leg tucked in and right leg extended. There is a grace in that posture, which combined with her benevolent countenance, depicts her readiness to help those in suffering. Her contemplative mood represents her aesthetic associations with art and wisdom.

Green Tara sits in a meditative posture, her right hand in Gyan Mudra, and left in Surya Ravi Mudra. The sole of right feet rest against a curved pedestal. She is adorned with a three petaled lotus crown on her head, a choker and a necklace around her neck. The traditional eight-petaled lotus seems to rise from her left arm. Her figure is encircled by an open sculpted frame rising in the shape of upturned teardrops, reinforcing her that divine enlightened aspect.