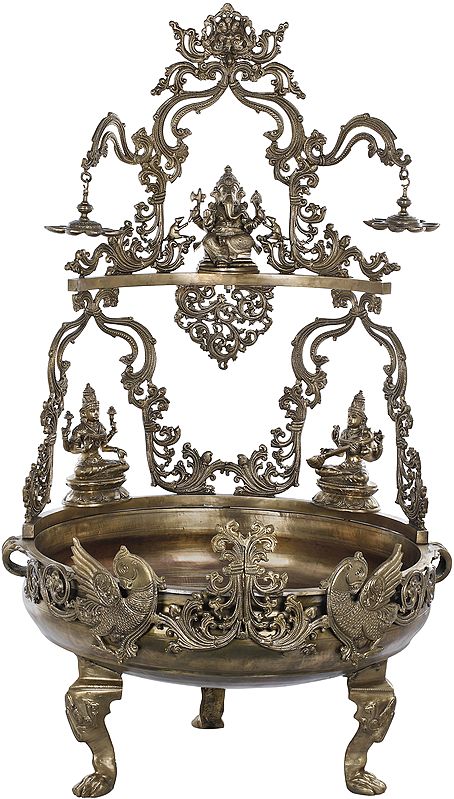 FREE Delivery
Only 1 available
$1684.69  $2995   (25% + 25% off)
An urli is a very Indian piece of home decor. It is a simple intuitive arrangement - a wide and shallow vessel that is filled with freshwater, on which is then floated the petals of freshly plucked flowers. Not only does a skillfully arranged urli fill your space with your favourite scent, but also makes for a pretty picture. The one-of-a-kind urli that you see on this page is a visually outstanding work of art in itself. Fashioned from bronze in the heart of India's contemporary bronze sculptural tradition, Bangalore, it would make for a sight once it filled to the brim with water, its surface packed densely with coloured petals.

The vessel stands on three peacock legs. There is a symmetrical vine motif carved at the front-centre of the mouth. The same is flanked by a pair of peacocks preening themselves, their miniscule plumage carved with great attention to detail. Their tails seemingly extend into the curvaceous vines that grace the edge of the urli’s mouth.

Amidst the vines curving upwards from the abaxial edge of the urli are seated Devi Lakshmi and her sister, Devi Sarasvati. On a similar scale is a Lord Ganesha murti at the top, flanked by His humble vahana and a pair of lamp-trays that add to the aesthetic appeal of your urli. The majestic vines that define this composition gather in a signature kirtimukha image at the very top.