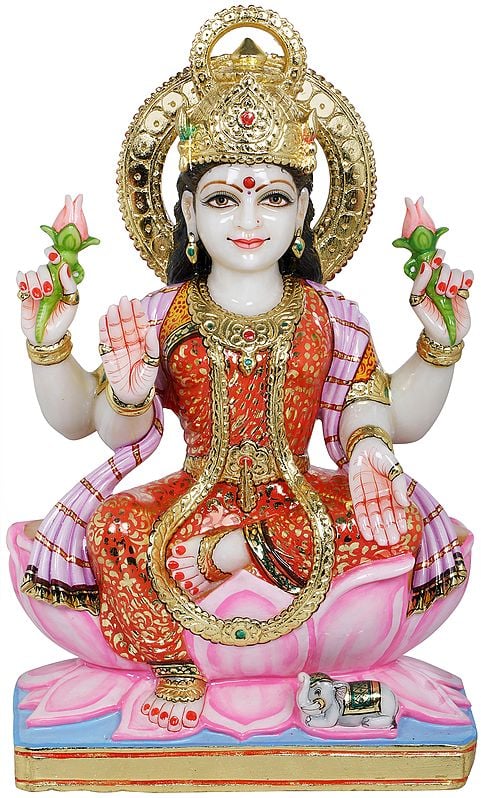 Lakshmi - Goddess of Fortune and Prosperity

The supreme goddess of the Hindu pantheon, goddess Lakshmi endeavours prosperity, good fortune, love and devotion; she is the Shakti or divine energy of Vishnu representing the material world of the earthly realms as the mother Goddess. The Indian Art depicts her as elegantly clad orange sari decorated with golden motifs of foil work and a purple stole that falls down in ease. She is the member of the triad of Hindu goddesses and represents iccha-shakti (power of thought) and an understanding of the objectives.

Lakshmi is popularly known as Padmavati as she is always surrounded by lotuses, as shown here, she sits on a fully bloom lotus throne and holds two lotus each in each of her rear hands. Her calming smile and the sparkling lotus eyes compliment her motherly, peace giving and enlightened gesture. The four arms symbolize the four goals of humanity which are, dharma, astha, karma and moksha, that she is shown to be granting here in this posture uniquely ornamented in marvellous jewels and a double aureoled gold crown glorifies her head.

An elephant can be seen residing on her pedestal, marked as a symbol of work, activity, strength, rain and fertility, she is therefore also named as Gajalakshmi. This brightly colored statue carved out of a single piece of marble reflects the sculpture’s hardwork, patience, creativity in the best possible price.