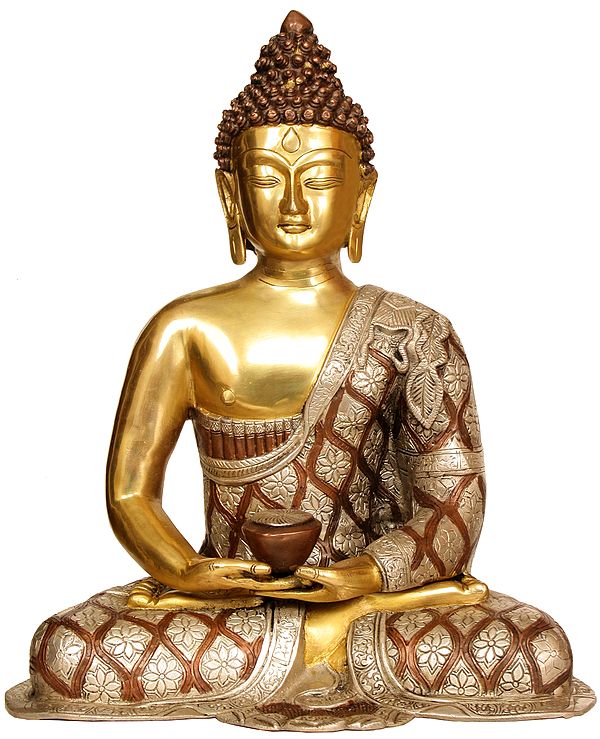 $475.00FREE Delivery
Bestseller
(Rated 5.0)
Lord Buddha hailed from a royal family, of the Shakya clan, hailing from the modern Indo-Nepal border. As a young man he renounced his aristocratic heritage and embraced the life of an ascetic beggar. Buddha understood the fallacies of materialistic attachments.

He taught to his followers that this attachment was the root of all suffering. It's notable however that Buddha never advocated complete renunciation to his disciples, not to all in any case, instead highlighting the importance of an honest, virtuous and simple living, while still suggesting them to keep performing their normal worldly duties.

This exquisite brass statue depicts Buddha in all his meditative simplicity. His elegant but simple robes are a representation of a traditional attire known as the triple robe, the tricivara, usually consisting of a waistcloth (antaravasaka), an upper robe (uttarasanga) and an outer robe (sanghati). The Buddha's robes are shown decorated with lotus flower patterns symbolizing purity of spirit and faith. The lotus depicted on the robes are fully bloomed, symbolizing the fully enlightened nature of this Buddha representation.

This skillfully crafted rendition shows a glowing majestic Buddha meditating in the dhyana mudra, the gesture of meditation. The dhyana mudra here also represents concentration, dhamma, and the sangha, completing the holy Buddhist triumvirate. His two hands are placed on his lap, right on top of left, holding a begging bowl that symbolizes his lack of possessions. His thumbs stretch slightly upwards, his hands and fingers creating the triangle that represents the spiritual fire of the three jewels.