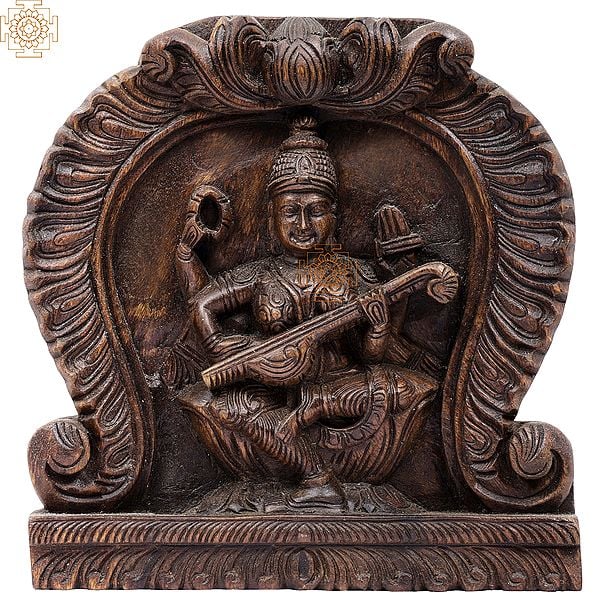 Goddess Saraswati is worshipped in Hindu and Buddhist sects, and along with Goddesses Lakshmi and Parvati, She forms the Tridevi, the divine Triad considered to be the feminine form of the Trimuti (Lord Vishnu, Shiva, and Lord Brahma). The Goddesses are the consorts of the Trimurti Gods and play the role of creator (Mahasaraswati), maintainer (Mahalakshmi), and destroyer (Mahakali). The term Saraswati is derived from the word ‘Saar’, meaning ‘the essence’ and ‘Swa’, meaning ‘Self’, and ‘Ti’ meaning ‘The one’, which shows us that Maa Saraswati is the one who provides all the jivas the essence of selfknowledge; the knowledge of the Absolute Truth.

In the beautifully crafted altar, the Goddess is seated on a Lotus pedestal which symbolizes knowledge and truth. She is not only the embodiment of true knowledge but also the consciousness of purity (Sattva Guna). Her four arms represent Her husband Brahma’s four heads that symbolize manas (mind), buddhi (intellect), chitta (imagination), and ahamkara (ego). Goddess Saraswati is the Shakti (power) of Lord Brahma, and without Her presence, the creation of the material world is not possible. A book in the upper left hand symbolizes the Vedas, which are the source of eternal and divine knowledge. A mala of crystals shows the importance of meditating our mind upon the Supreme, and the musical instrument ‘Veena’ represents the harmony and joy that come from acquiring the highest wisdom. Her divine form radiates the beauty of enlightenment and purity.