This book begins from the small village Shiladhi, where a young fakir clad in white arrived with a marriage party. He stayed on and his divine powers were slowly recognized by the laity around him. Slowly the dilapidated Mashid mayee gets transformed into Dwarka Mai lit up by the warm Dhuni Mai and the ever burning lamps. Vehement skeptics and devotees flock alike to Shirdi, as the Kul-adhipathi Sai Baba gathers them in his Gurukul. The book describes in detail the various well known miracles of Baba and illustrates their meaning in a lucid manner. The author brings a rare insight and an almost personal touch to this book as she describes the various articles used by Him and the places He visited regularly.

This book came about by this irresistible urge to share Shirdi, so readers can profit from it. The articles used and handled by Baba are with the Sansthan so the readers can see them and gain insight in their significance.

Vinny Chitluri was born is Arvankadu (Nilgiris), but was educated in Jabalpur (Madhya Pradesh). She did her post graduation in pediatrics from Kalawati Saren Hospital, Delhi. Then she went to the US, passed the board examination and was conferred the ‘Diplomat of the American Academy of Pediatrics’.

While in the US, she started thinking serious about her Karmic bonds with her family. As her father worshipped Baba, she was also able to do the same from a very young age. She has been worshipping Baba for sixty years. Her relationship with Baba is that of a ‘best friend’ as He loves her no matter what she does.

She retired from the medical profession at the age of fifty and came to Shirdi in 1994 and settled there. Then she set about trying to know more about Baba. She soon realized that ‘the more she learned about Him, the more ignorant she was’. Alas! It would take her many lives to know a little about this inscrutable God. But her quest is ongoing.

Baba spoke of the future of Shirdi to Mhalsapati and other devotees. He said, “There will be huge palatial buildings, big fairs will be held, high ranking officials will come here. My Brahmins will gather here”. And so it came to pass. The small remote village called Shiladhi turned into what it is now. I have tried to show what Shridi and the sacred sites were like in the 20’s, the 80’,s and at present.

Each site has a spiritual significance and each devotee gets what he wants from it. A devotee goes to a sacred place with a purpose and that gets fulfilled and he returns with an answer. Those who come to learn from Baba’s life and at each place they get an answer. What it is we do not know, but they are closer to the most important person in their lives?

Without a formal induction into a learning program each devotee finds an answer to his quest. He goes back a happier and contented person. Each devotee has a preference for a special site and gets and individual personal experience.

Devotees have many questions to ask about these sites and I have tried to explain their significance.

At the time that Baba manifested in Shiladhi it was a small, remote village, in Kopergaon Taluka, in the district of Ahmednagar. This was a district of the composite Bombay Province up to 1960 (now called Maharashtra). Shiladhi was small about 3.3 sq miles, calculated on the basis of the census, of a medium-sized family. Now, it is spread far and wide.

In the 1884 Bombay Gazetteer (Vol. XVII) of Ahmednagar district, it is mentioned in a chart of ‘Kopergaon villages of 1883’. It is grouped under ‘Taraf Korhale thirty villages’, where it is spelt as Shirdi. The Gazetteer says there is only one road in the Kopergaon Taluka to Malegaon. “This road enters the Kopergaon sub-division at the 45th mile from Ahmednagar near the village of Ashtagaon, and Shirdi is at its 53rd mile. The Godavari River is crossed by a wire-rope ferry”.

In the 50’s, as the bridge over the Godavari was low, it was often under water. Later the huge bridge was built. The Godavari flowed swiftly, and a boat used to ferry devotees to the other shore. Then the journey was by tonga; it was exciting to see the flag over the Samadhi Mandir far off from Neemgaon. Now there are so many buildings that it is not visible. Recently, a railway station has been built near Neemgaon.

Mamledar B V Dev first visited Shirdi in 1910. He recorded his impressions in the Sai Leela Magazine, in 1932. He states that Shirdi was originally known as ‘Shiladhi’ or ‘Shailadhi’. At that time the village was tiny and had about 400 houses. A few were large while others were small mud huts. The village had two wells and two schools. One school was up to the 7th standard in the Marathi medium and the other was a Marathi mission school.

The village had two panmalas (betel leaf vineyards), two orchards, one flower garden, one sugar mill, one flour mill and a water mill. There was one dharamshala for pilgrims to stay in. besides this, there were nine temples and two masjids.

The total population was about 2,586. The Muslims were the minority (about 10%) and the rest were Hindus. The Hindus were divided into the following castes- Brahmins, Marwadis, Marathas, Dhangars (Shepherds), Malis (growers of fruits and vegetables), Sonars (goldsmiths), Sutras (carpenters), Lohar (Blacksmiths), Kumbhars (potters), Parits (washermen), Mahars, Mangs Chamars (tanners and leather workers), Kolis, Bhils (scheduled tribes), Guravs and Vadars. There was a wide cross section of castes. Shirdi though small and remote was quite prosperous. The population was of a working class and Shirdi seemed to be quite self-sufficient.

In the 20’s and up to the 70’s there were many ‘Gow Shalas’ in and around Shirdi. Many of the neighbouring villages and villages as far away as Sinner and Nasik used to do ‘Gow dann’ to Shirdi Kshetra. They would bring cow and release it in Shirdi; hence there were numerous Gow Shalas. It is interesting to note that Baba is given butter sweetened with sugar as Prasad after kakad arati.

There is an interesting legend in the puranas. The sage Gautama brought the river (originally the Ganga) from the matted locks of Lord Shiva. Lord Shiva once vigorously shook his locks and dashed them on the ground. At that site the Godavari or Goda Mai originated, atop the Bramhagiri mountain near Tryambakeshwar.

The word ‘Godavari’ is broken down as, Go which means bhumi (earth or land), da means (bestower) and vari means shresth (the best or excellent). So Godavari means the land that bestowed the best. The banks of the Godavari have nurtured many a saint. But at Shirdi, it nurtured the ‘Parabramha’ who walked in the alleys and gullies and sanctified the soil. Shirdi is situated about eight miles south of the blanks of the Godavari. 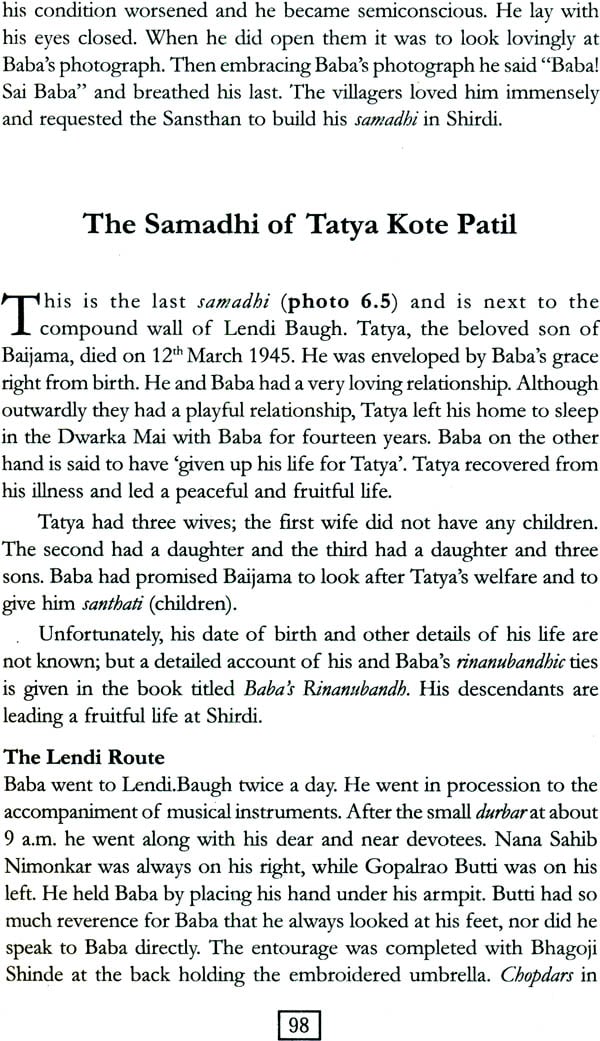