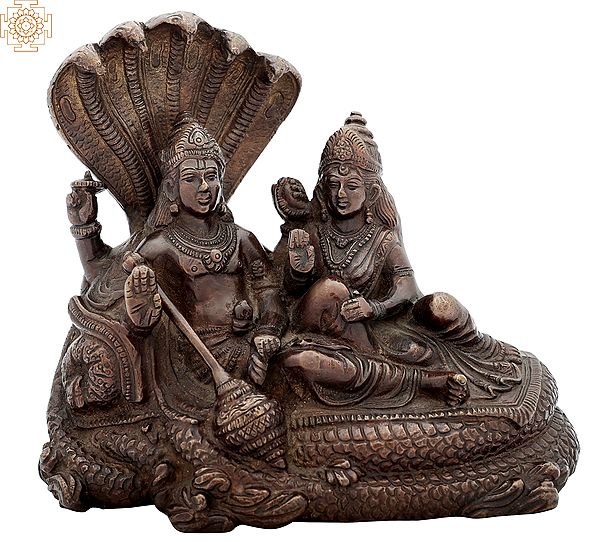 In the Kshirsagar or Thirupaarakadal (the ocean of milk), resting on the bed formed by innumerable coils of the body of Adi shehsha, resides Lord Vishnu. The imagery of Vishnu on shesha, accompanied by his consort Lakshmi has been created and worshipped since the time of the early Vaishnava shrines.

This piece is a work in brass, similar to the famous Anantshayi Vishnu of the Gupta period temple at Deoghar, with some alterations. While the Deoghar mural has Vishnu surrounded by numerous celestial beings and in a sleeping position, this one shows Vishnu as Asanamurti, in a seated posture, attentive and directly inspecting each event of the human plane. He has his three primary attributes, conch shell, lotus flower, and chakra in his hands with the mace resting on the couch of Adi shesha.

The divine couple has their right hand raised in the Abhaya mudra. Besides the mukuta (crown) and a few ornaments, the artist has avoided any heavy jewels, highlighting the natural roundness of their faces, which look quite humane. Compared to her earlier portrayals as a submissive, secondary figure in the compositions, Lakshmi in this brass work appears as an equal to her husband.

Attention to the details is clearly visible in the statue, which meticulously shows the waves of Kshirsagar splashing at the base of Adi shesha’s lower coils. This compact brass piece is available in 8 different tones for you to choose from before you bring Lord Narayan home.