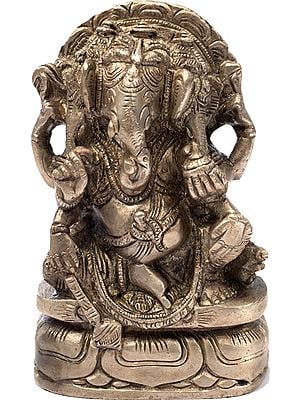 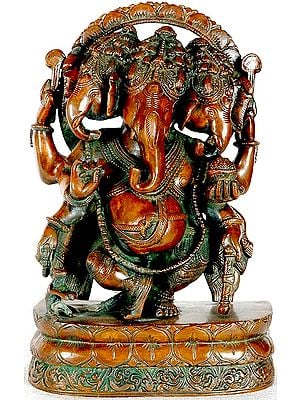 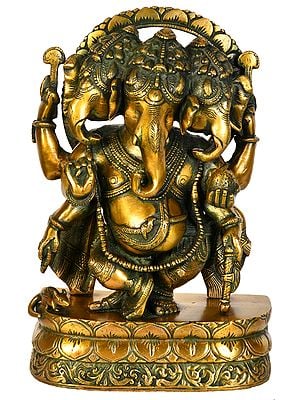 Trimukha Ganapati is the 28th of the 32 distinct forms of Ganapati. The concept 'Trimukha' is a blend of two words: 'Tri,' that implies three, and 'Mukha,' which implies face. Trimukha Ganapati is therefore the three-faced Lord with six hands, sat on a solid gold lotus. He seems to have a reddish skin tone, two right hands clutching the Japa Mala of Rudraksha beads and the elephant goad, and two left hands clutching a piece of rope and an urn full to the brim with nectar, while his principal right hand is gesturing as the boon-granting Varada mudra, his main left hand is posing as the Abhaya mudra, which provides protection to the followers. While this Lord is idolized in so many places, he can be viewed in an idol version at the renowned Lord Jagannath temple in Puri, Orissa. Trimukha Ganapati is believed to be associated with the star Avittam, furthermore known as Dhanishta Nakshatra. Trimukha Ganapati is indeed the Lord's benign and influential element. It is assumed that he will look after the devotees and their families. Praying with devotion to this Lord is believed to bring accomplishment in life and make worshippers triumphant in their pursuits. The three heads are believed to symbolize the attributes of Sattva as kindness, Rajas as enthusiasm, and Tamas as ignorance. It is assumed that it is the most effective of all idols. Introducing this Three-Headed Ganesha Idol with you may assist you in conquering your concerns of life and chances of that happening.

The Association of Ganesha with Intelligence

The story of the god's competitive rivalry with Karthikeya to become the first to tie the knot explains the god's affiliation to wisdom and intellect. They developed a challenge where the first individual to encircle the Earth would therefore be the first one to encounter a new wife. Karthikeya speedily mounted his blue peacock and decided to fly around the globe, not frittering away a second. Ganesha, on the contrary, sauntered over to his parents' residence, decided to embrace them, and referenced the sacred Vedas: "He who embraces his family seven times gains the worth of encircling the world 7 times."

But besides being quite a popular Hindu divinity, Ganesha has a notoriety for being greedy. Ganesha chose to ride his giant rat, Kroncha, to assist his digestive process after having eaten too many modak sweets. Nevertheless, when the rat came across such a large snake, he hopped back in terror and decided to throw off his mount. Ganesha managed to land on his full tummy, which also ruptured upon contact with the ground. The sweets from his tummy started rolling left, right, and center, but Ganesha managed to gather them cautiously, crammed them all back into his tummy, and wound the snake all over his tummy to retain it firmly shut. Ganesha was riding through all the night because he heard a deafening sound from the sky. The Moon and his women, the twenty-seven Celestial objects, could not really help but chuckle after seeing Ganesha rolled up in a snake. Ganesha was outraged and flung one of his tusks at the grinning Moon, who was attacked in the face and turned black. The dark nights had become the hot spot of thieves and villains alone without glow of the moon's light until responsible folk had had their fill and implored with the gods to reinstate the silver light. The gods demanded that Ganesha pardon the Moon, but only partly.

Q1. What is the biggest moral taught by Lord Ganesha?

Ganesha's story shows us the significance of having to carry out our obligations. We must not be extremely fearful of strong hurdles in our route.

Q2. What does Ganesha say about Forgiveness?

How much we don't acknowledge is that forgiving would save us all from the distress. If anybody misbehaves with us, he is governed by the law of cause and consequence.